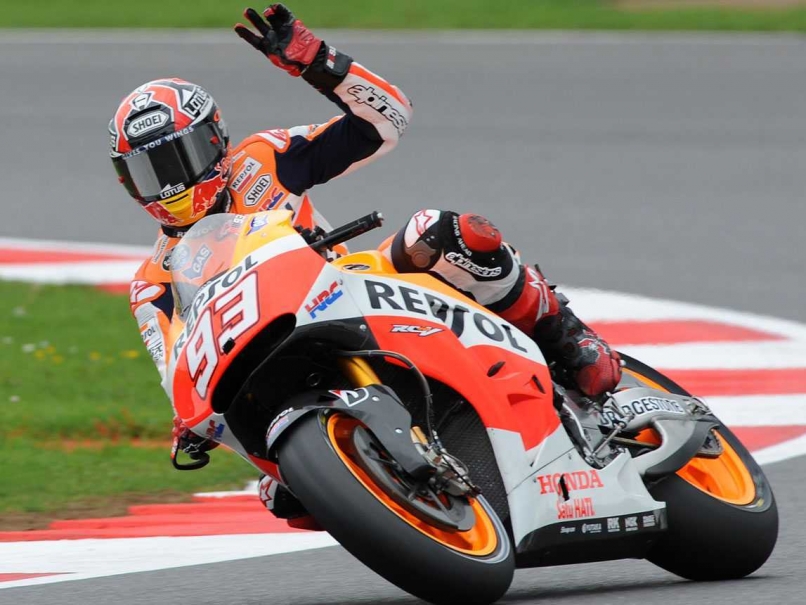 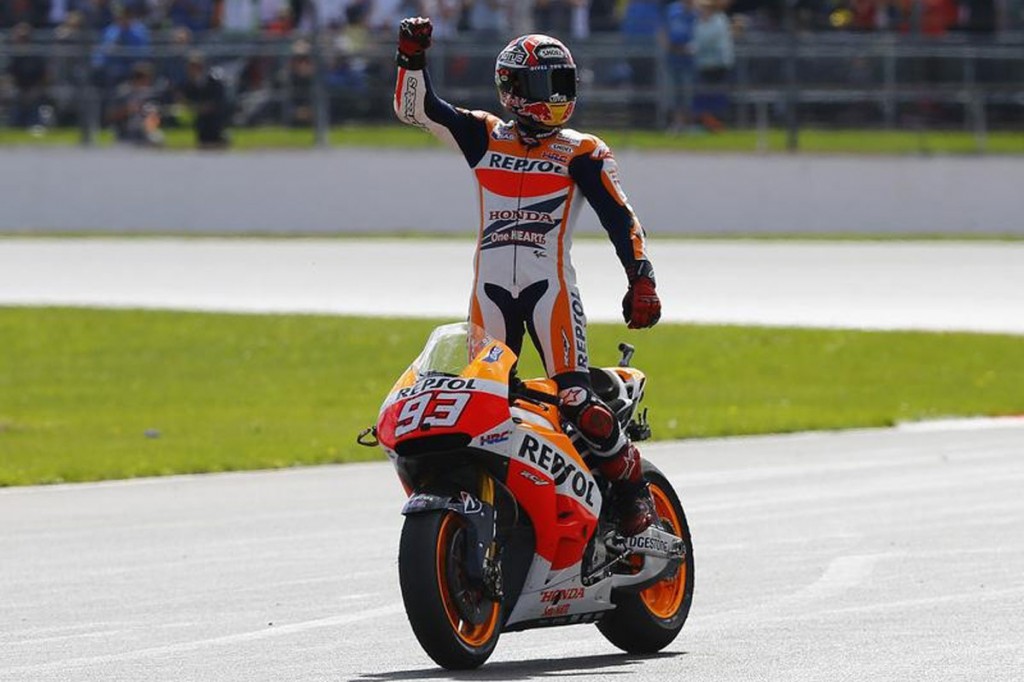 Runaway world championship leader Marc Marquez made it 11 wins from 12 races this season on Sunday as he won the British MotoGP at Silverstone.

The 21-year-old Spanish Honda rider — who on Saturday claimed his 10th pole position of the campaign — prevailed in a stunning duel with compatriot and two-time world champion Jorge Lorenzo on a Yamaha.

Lorenzo’s team-mate Italian legend Valentino Rossi was third in what was a record 246th MotoGP appearance while Marquez’s fellow Honda rider Dani Pedrosa, who won the Czech GP last time out, was fourth.

It was the third successive race Yamaha had filed the minor podium placings.

Marquez has 288 points with Pedrosa, who signed a two year extension with Honda, second on 199 and Rossi, who has also committed himself for another two years to Yamaha, third on 189 while Lorenzo has 157 with six races remaining.

Marquez, whose rare offday in the Czech Republic saw him finish fourth, said that he had enjoyed the tussle with Lorenzo.

“Honestly Jorge was much stronger than I expected,” he said.

“When I passed him the first time I made a small mistake and he got the lead back.

“However, I recalled what happened last year (he finished second to Lorenzo in the same race) and I didn’t want a repeat of that so I ensured once I got back in front again I wouldn’t let it slip.”

Lorenzo, who had won the past two editions of the British race, said that he had been surprised by the performance of his bike.

“Marc has the power but as I have said in racing sometimes you have surprises,” said the 27-year-old.

“Once I hit the front I rode like a demon. However, once Marc passed me towards the end of the race I was too tired to react.”

Rossi, who holds the all-time record in 500cc/MotoGP victories with 60, was delighted with his podium spot.

“I’m very happy to have my first podium spot at Silverstone (the race has only been held there since 2010),” said the 35-year-old.

“I rode at maximum speed the last lap to hold off Dani.

“I had a good rhythm initially and stayed with Jorge and Marc but I burnt up my rear tyre and after that I had no chance. We must work on the bike so that in the future I can remain competitive with them.”

Lorenzo got a terrific start shooting into the lead ahead of Marquez, whose weakest part of his armoury has been his starts, while Pedrosa got an awful one dropping to sixth.

Marquez was right on Lorenzo’s shoulder going over the line with 15 laps remaining with three riders Rossi, Dovizioso and Pedrosa a little bit further back but clear of the pack.

Pedrosa continued his recovery from the poor start by passing Dovizioso and pressurised Rossi, who he succeeded in getting past with 11 laps remaining and set off after the leading two who were almost three seconds clear.

Lorenzo kept Marquez at bay toying with him at times forcing the younger Spaniard to go out wide and costing him ground but Pedrosa was unable to make any inroads into their lead and indeed was four seconds down with eight laps to the chequered flag.

Indeed Pedrosa couldn’t shake off either Rossi or Dovisioso and was passed by both of the Italians with just over seven laps remaining.

The duel up front heated up considerably with five laps to go as Marquez passed Lorenzo but the Yamaha rider bit back immediately and passed Marquez almost immediately.

It was a superb and engrossing contest highlighted by the exchange with three laps to go as Marquez looked to have got the better of Lorenzo on one corner only for the door to be shut on him.

However, the irrepressible youngster was not to be denied and took the lead on the next corner and for once Lorenzo had no answer.