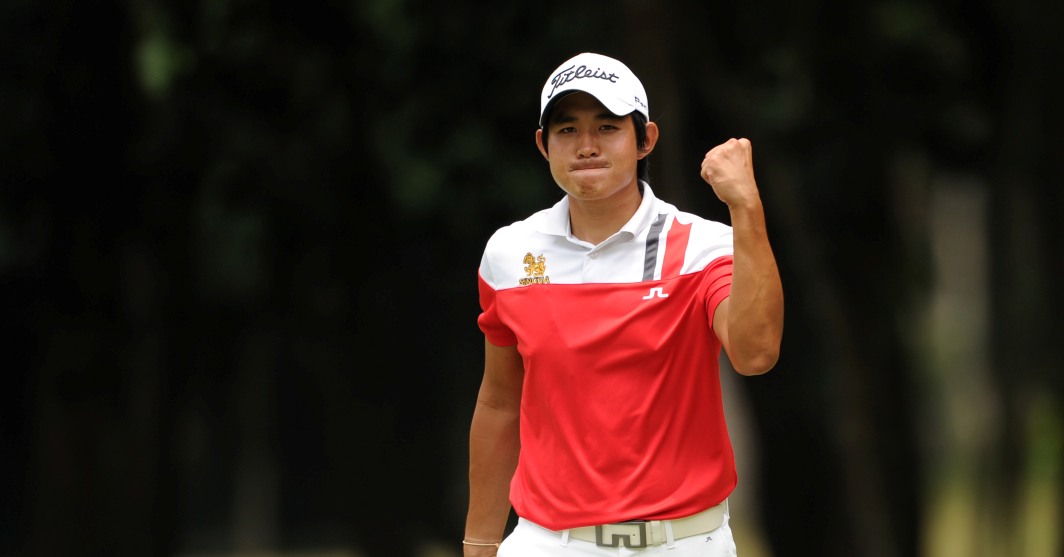 Thailand’s rising star Pavit Tangkamolprasert stood on the brink of his fourth Asian Development Tour (ADT) title when he shot a second straight five-under-par 67 to grab the third round lead at the 15th ADT Chang Hwa Open on Saturday.

The talented Thai, who claimed two ADT victories within a month in August and September, nailed five birdies against a lone bogey to lead by one shot on nine-under-par 204 total at the US$100,000 Asian Development Tour (ADT) event.

Ireland’s Niall Turner carded a 67 to sit in second place on 205 while England’s Grant Jackson, who also carded a 67, stayed three shots back in third place with overnight leader Lin Chien-bing of Chinese Taipei at the Chang Hwa Golf Club.

Local amateur Yu Chun-an signed for a 69 to share fifth place with Japan’s Mitsuhiko Hashizume on 209 at the Chang Hwa Open, which is returning onto the ADT schedule for the second straight year this season.

Defending champion Hung Chien-yao of Chinese Taipei finally put up a red number on the board when he posted a 68 to stay eight shots off the pace in tied-13th position.

Pavit, whose breakthrough victory came at the 2013 season-ending event in Jakarta held earlier in January, has enjoyed a splendid run this season where he claimed two victories and five top-five finishes.

“My tee shots were good and I hit good fairways and greens. The turning point came on the eighth hole where I hit my second shot from 130 yards to about three feet from the pin. I picked up some confidence from that hole and it got my game going,” said the 25-year-old Thai.

“I’m definitely feeling excited about the final round tomorrow but it’s going to be pretty much the same thing for me. I will just play my best and continue to enjoy my game out there,” added Pavit.

Pavit sits in second place on the ADT merit rankings with a current haul of US$50,928, trailing leader Chan Shih-chang of Chinese Taipei by about US$16,000.

Should he win the 15th ADT Chang Hwa Open tomorrow, he will walk away with a winner’s prize purse of US$17,500 which will eventually propel him to the top of the Order of Merit.

Turner, placed fifth on the Order of Merit, kept up his chase for a second victory as he put himself in a good position heading into the all-important final round.

“I hit the ball well and I made good putts out there. I got off to a very good start and that got my momentum going. Pavit is playing very solid but I have a good chance too. I am looking forward to the final round tomorrow,” said the tall Irishman, who claimed his maiden ADT victory in Jakarta in July.

Jackson, who took a share of the first round lead, was delighted to haul himself back into contention.

“I’m happy to put up another good round. I will be fighting all the way tomorrow. My putting was much better today and I guess that made the difference,” said the 32-year-old, who is based in Thailand.

The Chang Hwa Open is the ADT’s third and final stop in Chinese Taipei this season, following the successful staging of the Taifong Open and Ballantine’s Taiwan Championship in July and August respectively.

All ADT events also receive Official World Golf Ranking (OWGR) status which is a boost for the game in the region.