Home 2022 India’s Atwal turns back the clock with superb 63 at Butterfield Bermuda... 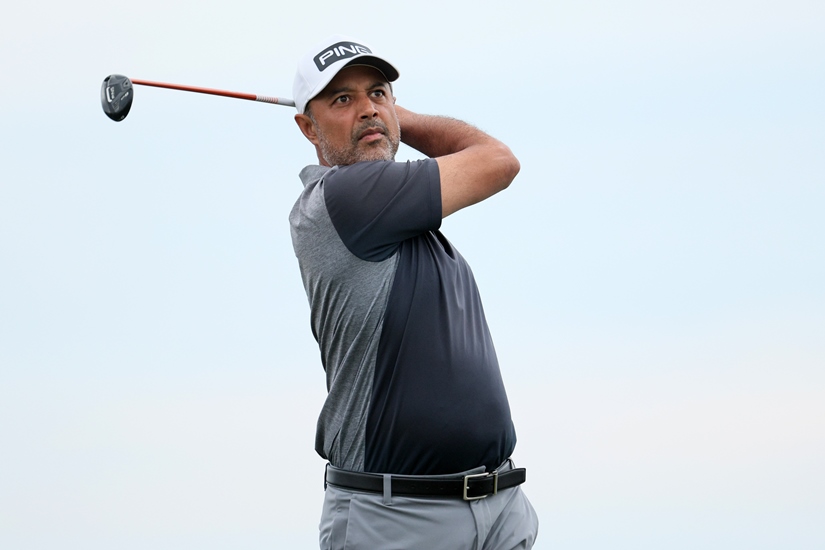 Indian veteran star Arjun Atwal surprised even himself with a stellar 8-under 63 to lie one stroke off the first-round lead in the Butterfield Bermuda Championship on Thursday.

The 49-year-old Atwal, the only Indian to win on the PGA TOUR, has not played any competitive golf since the recent passing of his father but produced his lowest round in 10 years with nine birdies at Port Royal Golf Club to trail co-leaders Austin Smotherman and Harrison Endycott.

Chinese Taipei rookie Kevin Yu carded a 64 for tied eighth while Korea’s Byeong Hun An and China’s Marty Zecheng Dou came in with 65s to ensure a strong Asian presence on the leaderboard.

“The only thing I could see was hopefully I could get around this place walking because I haven’t played much golf,” said Atwal.

“I lost my father about three months ago in India, so I went over there. I just haven’t played golf, and forget walking. I played 18 holes at Isleworth last Friday in a golf cart and it’s not the same as this place, as you guys know, so I’m really pleased I got the 18 holes in and I’m not worn out as such.

“I’ve never had a loss in my immediate family, so it’s really hard to deal with. And with my parents, they lived in India. My mom still lives in India. Not having seen them for all these years, it was really tough on me.”

After cutting short his breakfast upon learning he was in the field with 20 minutes to prepare following the withdrawal of Nicholas Lindheim, a free-swinging Atwal came out of the blocks with three straight birdies and hit two more to turn in 30. A bogey on 10 was quickly offset by four more gains on his inward nine.

He credited an old faithful putter for his outstanding start where he ranked first for Putts per Green in Regulation (1.25). “I got here around 7:30, hit a few wedges and then went in to eat breakfast and about 8:45 my caddie texted me. He’s like, oh, 9:10 we might have a game. So I came out, hit a few drivers and off we went. It was fun, started with three birdies in a row,” said Atwal, whose last PGA TOUR start was the 3M Open in July where he was disqualified for not signing his scorecard after a first round 73.

“I putted really well. This is the way I used to putt. I brought my old putter with me, my Craz E, and I haven’t putted all that well with it even in the last few years whenever I brought it out, but today just got my old feels back. I think I led the Tour in 2005 in putting and this was the putter that I putted with, and also when I won the Wyndham (Championship in 2010) was this putter. So it’s got like four wins, it’s got a few more European wins as well. I started seeing my lines and it was really fun.”

Atwal is amongst Asia’s golf legends with multiple wins on the Asian Tour and DP World Tour and remains as India’s lone winner on the PGA TOUR. As he will turn 50 next March, he is looking forward to switching his attention to PGA TOUR Champions.

“I’ve already entered the finals of Q-School in Phoenix, I’m going to go for that if my body holds up. I’ll still have a few starts like the Senior British because of my worldwide wins. But I’m just really looking forward to playing out there with my buddies because I really don’t know too many people on this tour anymore. There’re so many kids and they’re like, they see me walking around like, Who’s this old dude? And all my friends are out there on the Champions Tour, so I’m really looking forward to that,” said Atwal, who is based in Orlando.

The last time Atwal featured in the top-10 of any round on the PGA TOUR was in 2019 at the 3M Open but he knows there is nothing left for him to prove after a stellar career that has taken him all around the globe. “The game’s just a game. I take it for what it is now, you know, and I have nothing to prove to anybody. I’ve won out here, I’ve won on the European Tour, the Asian Tour and I’m looking forward to the 50 tour next year after March, that will be fun,” he said.