Home Badminton Indonesia assured of place in the semis 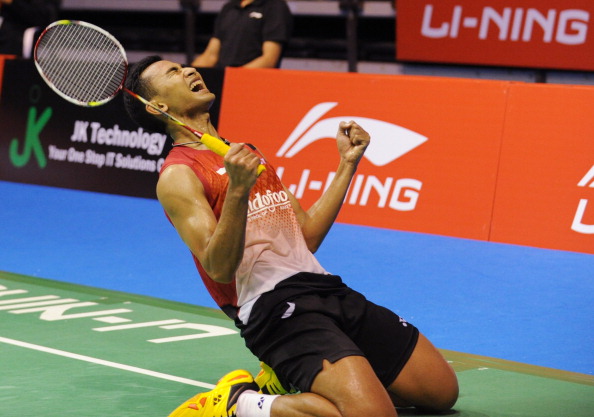 INDONESIA continued their relentless march in the 3rd Axiata Cup at the Britama Sport Hall in Jakarta with another 4-0 win – this time over Singapore in Monday’s afternoon session while the Philippines secured their first points with a fighting display against Vietnam for a 2-2 draw.

The big win took Indonesia to the top of the table with 18 points from four wins and a draw out of five matches after some confusion over the points was sorted out this morning following complaints by some teams, especially All-Star Europe. Indonesia’s only blemish so far was the 2-2 draw against All-Star Asia in the opening match. But it has been smooth sailing for the Garuda team since then.

The homesters, have the biggest team in the tournament and even their reserves have been in devastating form although Indonesia fielded their top singles player Tommy Sugiarto against Singapore’s 17-year-old Penang-born Loh Kean Yew. Tommy, son of former world champion Icuk Sugiarto toyed with his rookie opponent for a 21-13, 21-11 win in 30 minutes.

Another of Singapore’s naturalised citizen, China-born Chen Jiayuan (No 58) was the next to fall – losing 21-18, 21-18 to Indonesia’s world No 34 Bellaetrix Manuputty in the women’s singles for a 2-0 lead. In the men’s doubles Hendra Setiawan-Markis Kido made it 3-0 for Indonesia with a 21-19, 21-10 over HendraWijaya-Terry Hee Yong Kai. World No 11 Riky Widianto-Richi Puspita Dili finished off the tie in style with an effortless 21-15, 21-17 win over Loh Kean Hean-Tan Wei Han.

Vietnam’s top number one shuttler, 22-year-old Nguyen Tien Minh (No 17) took only 27 minutes as he strolled to a a 21-16, 21-18 win over Antonio Benyamin Gadi. It was the 30-year-old Tien Minh’s first match in the tournament as he was tied down by the Purple League in Malaysia where he plays for Petaling Jaya BC. Tien Minh is also the reigning US Open champion.

Top woman shuttler Vu Thi Trang (53) made it 2-0 for Vietnam with an easy 21-16, 21-8 win over Sarah Joy Barredo,18, a High School student from Manila and Vietnam looked set for a big win but it turned out to be false call.That was as far as Vietnam, 7th overall last year, could go as the Filipinos came back strongly in the doubles.

While the Filipinos were smiling, the Vietnamese were left disappointed and dejected.