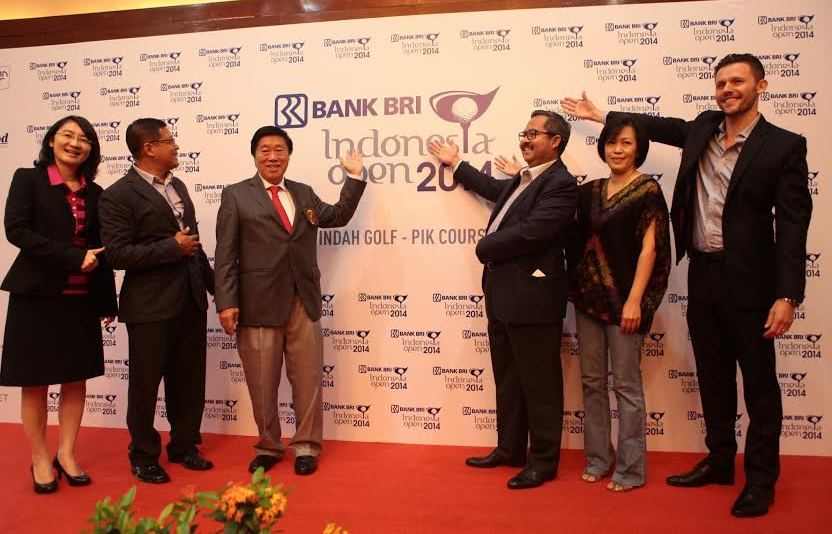 Organisers of Indonesia’s national open announced a double-dose  of good news today as Indonesia’s oldest bank, BANK BRI, stepped up to become title sponsor of the tournament, and defending champion, Gaganjeet Bhullar confirmed his attendance at this year’s event, to be played at Damai Indah Golf, PIK Course in Jakarta from December 4 to 7.

BANK BRI was a platinum partner of the 2013 edition and following the success of that partnership, the bank has agreed to become title sponsor of Indonesia’s oldest golf tournament.  The tournament will now be called the “BANK BRI Indonesia Open” and will offer a purse of at least USD 500,000.

Mr. Firman Taufick, Executive Vice President of BANK BRI, commented “We are absolutely delighted to become the title sponsor of the oldest professional tournament in Indonesia and to put our name to the ‘BANK BRI Indonesia Open’.  Both the bank and the tournament share a rich and storied history that makes us natural partners.  We both understand the importance of tradition, yet appreciate the need to always evolve and innovate.”

“Starting with the ‘BANK BRI Indonesia Open 2014’, BANK BRI will launch a number of new loyalty program privileges for our premium customers, especially for those who are fans of golf. By participating in international events, BANK BRI will reinforce its position as a bank ready to take part in the global market,” said Mr. Taufick.

“Everyone at BANK BRI is extremely excited about our partnership.  I’d like to thank Persatuan Golf Indonesia for their support and IMPL for their hard work in bringing this partnership to fruition,” concluded Mr. Taufick.

In a further boost for the tournament, defending champion Gaganjeet Bhullar will return to Jakarta in December to defend the crown he won in such style last year.  Shooting four rounds in the 60s – 64, 67, 69 and 68 – the popular Indian completed a wire-to-wire victory in 2013 with a 16 under par total.

“Last year’s victory was my biggest career win to date so it’s really important for me to come back and play well and try to defend my title.  I haven’t played much in Asia this year and I’m looking forward to getting back to the region, seeing my fans and playing some good golf,” said Bhullar.

Asian Tour Chairman Kyi Hla Han is confident of another great showing from the best players from the Asian Tour and is looking forward to another exciting edition of the Indonesia Open.

“We’re looking forward to welcome the return of the best players from the Asian Tour to the 2014 Indonesia Open. The Asian Tour has celebrated the success of many worthy winners recently. With the Indonesia Open highly regarded as one of the popular national Opens in Asia, we’re confident of another success story waiting to be written this year.”

Mr. Murdaya Widyawimarta (Po), President of Persatuan Golf Indonesia, the national golf association of Indonesia and organisers of the “BANK BRI Indonesia Open”, was thrilled with the dual announcement:

“This year will be the 37th Indonesia Open and we are delighted that one of Indonesia’s most respected and trusted financial institutions, BANK BRI, has committed to a partnership with the tournament.  With their support, the ‘BANK BRI Indonesia Open’ will continue to grow and develop and we look forward to a bright future for the tournament.”

“It’s also wonderful that we are able to confirm the return of our defending champion so far in advance of the event.   Gaganjeet played some magnificent golf last year and was a worthy winner of our event.  We’re all looking forward to welcoming him, and a host of other fine golfers, back to Pantai Indah Kapuk for what I’m sure will be another thrilling tournament.”

“This event will surely support the growth of the national golf scene, even allowing amateur golfers to take part in developing golf in Indonesia,” concluded Mr. Murdaya Widyawimarta (Po).

Franciscus Welirang, Director of PT Indofood Sukses Makmur Tbk, said, “Golf is a sport that has great potential in Indonesia, and the increasing number of world class golf tournaments will grow the interest of local golfers. In any sport, including golf, good nutrition is essential for athletes to stay healthy, active and for them to reach their full potential. Indofood, as a food and beverage company with a vision to become a ‘Total Food Solutions Company’, is honored to participate in supporting the ‘Bank BRI Indonesia Open 2014’, which will inspire national golfers to reach success in the international arena.

Grant Slack from IMPL commented: “We would like to thank BANK BRI for their continued and enhanced commitment to the BANK BRI Indonesia Open. It is fantastic for the National Open to have such strong support from the Indonesia business community and we look forward to working with BANK BRI, the PGI, PIK, Jaguar, Indofood, and all of our other sponsors in this year’s tournament.”