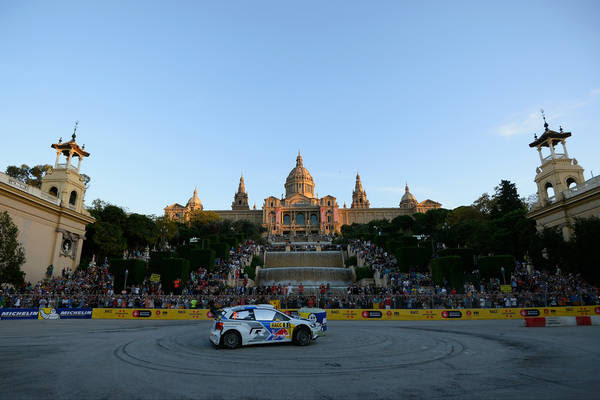 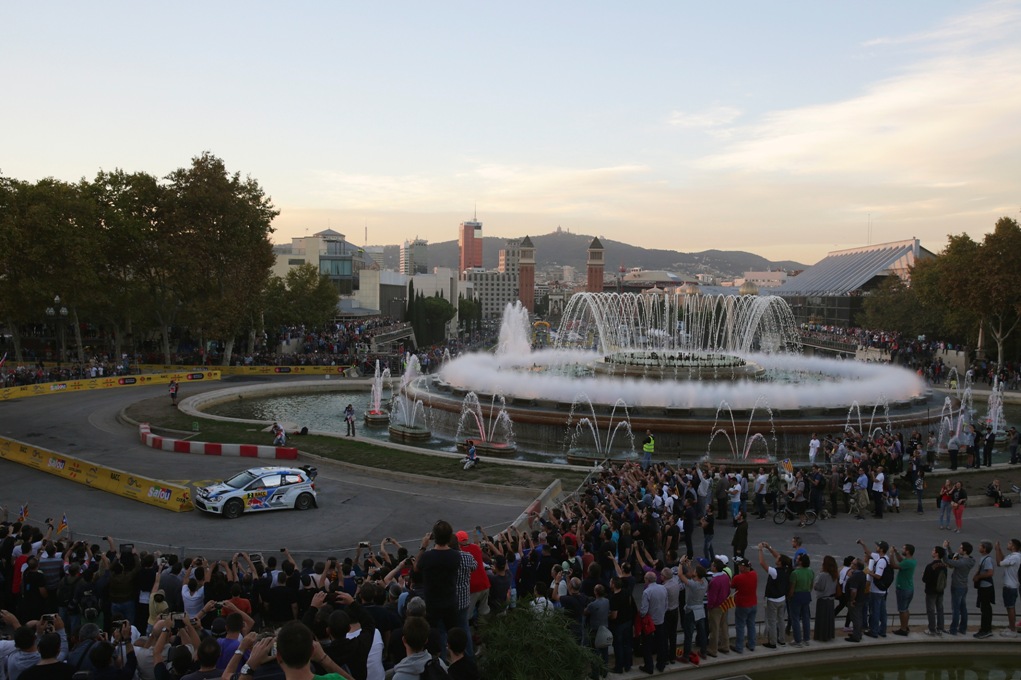 Short, sweet, skilful: Volkswagen made a good start to the Rally Spain. At the foot of the famous Montjuïc hill in Barcelona, Andreas Mikkelsen/Ola Fløene (N/N) clocked the fastest time on the only special stage laid out on the narrow terraces. Sébastien Ogier/Julien Ingrassia (F/F) were second fastest, with Jari-Matti Latvala/Miikka Anttila (FIN/FIN) fourth on the opening stage.

With world-famous architecture lining the route through the heart of Barcelona, the rally stars were given a rapturous welcome from an enthusiastic crowd who had turned out to watch stage one of the twelfth round of this season’s FIA World Rally Championship (WRC).
The World Rally Cars, including the three Polo R WRC, passed the Barcelona Pavilion, which was designed by Mies van der Rohe and built for the 1929 International Exposition, crossed the famous Plaça de Carles Buïgas with its fountain, and drifted beneath the National Art Museum.
With the short but spectacular 3.2-kilometre opener behind them, the teams really get stuck into the Rally Spain on Friday, when they will face 138.54 kilometres on gravel. The Rally Spain is the only round of the WRC held on both gravel and asphalt.
The eyes of rally fans around the world will be on the all-Volkswagen duel between Ogier and Latvala: should Latvala finish ahead of Ogier, the title race will go down to the final rally in Great Britain. If Ogier beats Latvala, he will be crowned World Rally Champion with one event remaining.

Quotes after the opening stage of the Rally Spain

Sébastien Ogier, Volkswagen Polo R WRC #1
“We made it through the opening special stage cleanly. The Rally Spain really gets going tomorrow. There were an incredible number of spectators on the Montjuïc, and it was great to get the weekend started against this backdrop. From tomorrow we will focus on the duel with my team-mate Jari-Matti Latvala and, if possible, wrapping up the Driver and Co-Drivers’ title here in Spain. I don’t think we will be the ones under the greatest pressure.”

Jari-Matti Latvala, Volkswagen Polo R WRC #2
“The opening stage was short but demanding. The Polo was superb. I reckoned on losing a little time today, and fit just one soft and three hard tyres on the car. I think having used fewer soft tyres will pay dividends from tomorrow, when the battle with Sébastien Ogier really begins.”

Andreas Mikkelsen, Volkswagen Polo R WRC #9
“We decided to attack right from the first special stage and are counting on gaining more time on softs here than we might end up losing on old tyres tomorrow. Part one of the plan went well: we opened about a two-second gap and lead going into the first real day of rallying tomorrow. Let’s see whether part two of the plan works out.”

Jost Capito, Volkswagen Motorsport Director
“A successful start to the Rally Spain on a remarkable special stage. It provided a magnificent backdrop. The sporting action really gets underway tomorrow, when the cars head onto the gravel stages. We have an extremely exciting Rally Spain ahead of us. Sébastien Ogier wants to win the title here, because he knows: anything is possible in Great Britain. Jari-Matti Latvala wants to keep the title race in the Driver and Co-Drivers’ Championship alive, because he also knows: anything is possible in Great Britain. And then we also have Andreas Mikkelsen, who is hungry for his first win. This Rally Spain will be anything but boring.”