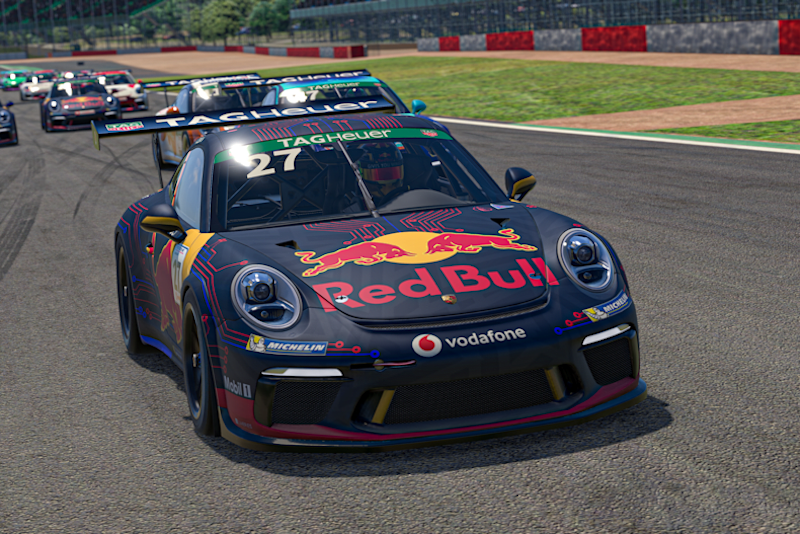 Sebastian Job took the championship lead at round four of the Porsche TAG Heuer Esports Supercup at Silverstone. Teammate Patrik Holzmann had one of his best race days of the season so far finishing in fourth and fifth. Graham Carroll finished sixth in the sprint race but was taken out early in the endurance race and recovered to finish in 24th.
During the reverse grid sprint race, Sebastian progressed up to sixth, just behind Graham. Patrik was holding his own in second, but he went wide in a corner allowing two drivers past. This is how the race remained until the last lap, when the Team made a move to boost Sebastian’s points, whilst blocking Rogers (VRS). Graham moved aside to let Sebastian through, but kept close enough on the racing line to ensure Rogers couldn’t get through.
For the endurance race, Graham was in fifth when Rogers went to make a move but clipped Graham and was rear-ended by Warren (LogitechG Altus Esports), this saw Graham drop to 32nd.  Graham managed to claw his way back up to 24th. Meanwhile, Sebastian had a fantastic opportunity to take the lead in the championship, although he was unable to take the race in and he settled for third. Patrik was able to keep his rivals off the back of him and passed the chequered flag in fifth.
Sebastian comments on a successful race, “I’m quite happy with my performance today, it was a bit of a different approach to previous races. I was happy with the pace, but I did struggle with the tyre degradation, I think I might have gone a bit too aggressive earlier in the race. The first race was very intense, the second race was a bit more chilled out. I think I will have a similar strategy for the upcoming races, it’s all about getting the points now. I don’t think I will be taking huge risks.”
Patrik adds “Today went well, I came fourth and then fifth. We scored solid points this weekend but after starting in second, it’s a bit disappointing to move backwards. The pace wasn’t quite there today to get the most out of the car. It’s still another positive that the team had all three cars fighting for points at the front of the grid, I will try to improve even more for next time.”
Graham comments “Third in qualifying put me in a great position for both of the races today. I started in sixth with the reverse grid and ended up sixth for the sprint race. I was about one minute into the feature race when Rogers nudged me and spun me off the track, which limited my chances of scoring points. I am really gutted with how today ended up but we will keeping fighting.”
The next round of the Porsche TAG Heuer Esports Supercup takes place on Saturday 1 August at Road Atlanta. The race begins at 15:00 BST and you can follow all the action live.
Porsche TAG Heuer Esports Supercup Round 4 – Silverstone Sprint Race Result
1.       Jeremy Bouteloup – DirectForce Pro
2.       Alejandro Sánchez – MSI eSports
3.       Maximilian Benecke – Team Redline
4.       Patrik Holzmann – Red Bull Racing Esports
5.       Sebastian Job – Red Bull Racing Esports
6.       Graham Carroll – Red Bull Racing Esports
7.       Joshua Rogers – Virtual Racing School
8.       Dayne Warren – LogitechG Altus Esports
9.       Jeff Giassi – Positive SimRacing
10.     Ricardo Castro Ledo – DirectForce Pro
Porsche TAG Heuer Esports Supercup Round 4 – Silverstone Endurance Race Result
1.       Alejandro Sánchez – MSI eSports
2.       Maximilian Benecke – Team Redline
3.       Sebastian Job – Red Bull Racing Esports
4.       Jeremy Bouteloup – DirectForce Pro
5.       Patrik Holzmann – Red Bull Racing Esports
6.       Jeff Giassi – Positive SimRacing
7.       Kevin Ellis Jr – Apex Racing Team
8.       Ricardo Castro Ledo – DirectForce Pro
9.       Dayne Warren – LogitechG Altus Esports
10.     David Williams – DirectForce Pro
…
24. Graham Carroll – Red Bull Racing Esports
Porsche TAG Heuer Esports Supercup Championship Standings after Round 4
1.       Sebastian Job – Red Bull Racing Esports – 219 points
2.       Maximilian Benecke – Team Redline – 201 points
3.       Alejandro Sánchez – MSI eSports – 198 points
4.       Joshua Rogers – Virtual Racing School – 194 points
5.       Dayne Warren – LogitechG Altus Esports – 155 points
6.       Sindre Setsaas – CoRe SimRacing – 136 points
7.       Tommy Østgaard – Coanda Simsport– 135 points
8.       Jeff Giassi – Positive SimRacing – 131 points
9.       Brian Lockwood – Racekraft Esports – 130 points
10.     Ricardo Castro Ledo – DirectForce Pro – 109 points
…
11.     Graham Carroll – Red Bull Racing Esports – 102 points
19.     Patrick Holzmann – Red Bull Racing Esports – 62 points