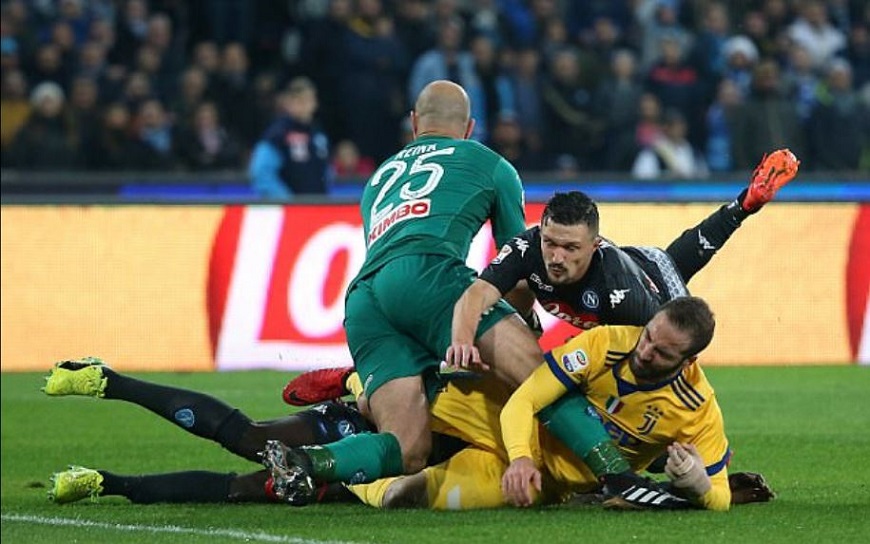 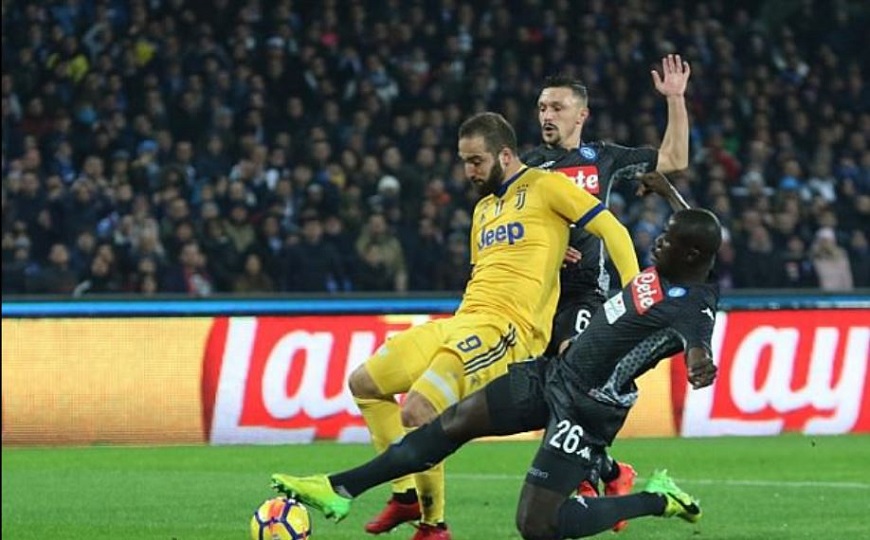 Gonzalo Higuain shrugged off a broken hand to inflict a first Serie A defeat of the season on his former club Napoli Friday, as champions Juventus moved a point behind the leaders with a 1-0 win.

Higuain had surgery on Monday, but insisted on starting in a key clash between league leaders Napoli and the six-time defending champions.

His appearance at his former stomping ground, the San Paolo Stadium, was greeted with jeers by the home crowd.

“Higuain is a phenomenon in these situations,” said Napoli coach Maurizio Sarri. “They have 90 million less, but three points more.”

Juventus move second just one point behind Napoli after 15 games, and ahead of Inter Milan — now the only unbeaten team — who can claim the championship lead on Sunday when they host Chievo.

It was the first win for Juventus in Naples in nearly three years, but captain Gianluigi Buffon warned the Turin side from getting too euphoric.

“Winning in Naples isn’t easy but we mustn’t get too excited, even if I have to say we were very good,” Buffon told Mediaset Premium.

“While there is a certain satisfaction, we know that we are second and risk being third.

“Higuain has been in astounding form for months, it would have been a shame to lose him for such a game. The fact that he gave us a hand tonight is a great sign.”

Massimiliano Allegri conceded that Higuain had been raring to start with Mario Mandzukic ruled out.

The fired-up Argentine had looked set to score after just four minutes when he picked up a Douglas Costa cross but his close-range effort was kept out by Pepe Reina.

But less than ten minutes later the Turin giants got their noses ahead when Paulo Dybala used a Costa run to draw away defenders with his sliding cross for Higuain beating Reina.

Slovak Marek Hamsik looked as if it could be his night to equal Diego Maradona’s Napoli goalscoring record, but Buffon got his fingers to his long-range strike.

Napoli pushed forward in the second half but had little to show from attempts from Insigne after 72 minutes and Hamsik ten minutes later.

In the end it was former Napoli star Higuain who made the difference with his fifth goal against his former side in 16 months.

“I’m not stopping (to talk),” Higuain told journalists afterwards. “I did my talking on the pitch.”

Friday night’s action saw all three Italian Champions League sides — Napoli, Juventus and Roma — in action before key European games next week on which their progress to the knockout phase depends.

And Roma warmed up for their game against Qarabag by easing past 10-man SPAL 3-1 with goals from Edin Dzeko, Kevin Strootman and Lorenzo Pellegrini.

Dias Felipe was sent off after 10 minutes after initially been given a yellow card by the referee, following consultation with VAR (video assistant referee) for fouling Dzeko.

Dzeko opened the scoring nine minutes later following a Stephan El Shaarawy assist, who also flicked a backheel for Strootman to score, with Pellegrini heading in on 53 minutes.

Federico Viviani pulled a goal back two minutes later as he fired in a rebound after his penalty was saved by Roma goalkeeper Alisson, to the fury of coach Eusebio Di Francesco.

“I’m really annoyed at conceding the goal,” blasted the Roma coach as his side are still very much in the title chase, in fourth just four points behind Napoli with a game in hand.

“We wanted the win at all costs. It’s important to eliminate these little distractions. SPAL barely had a shot on goal and we needed the win to prepare in the best way for Qarabag.”-Agence France-Presse