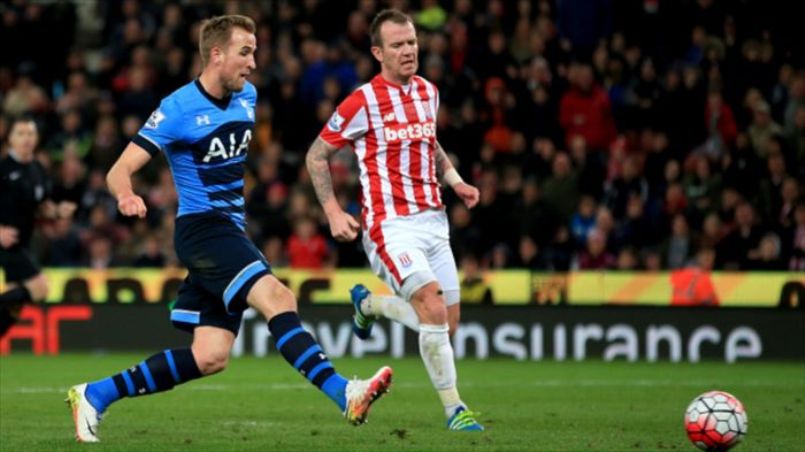 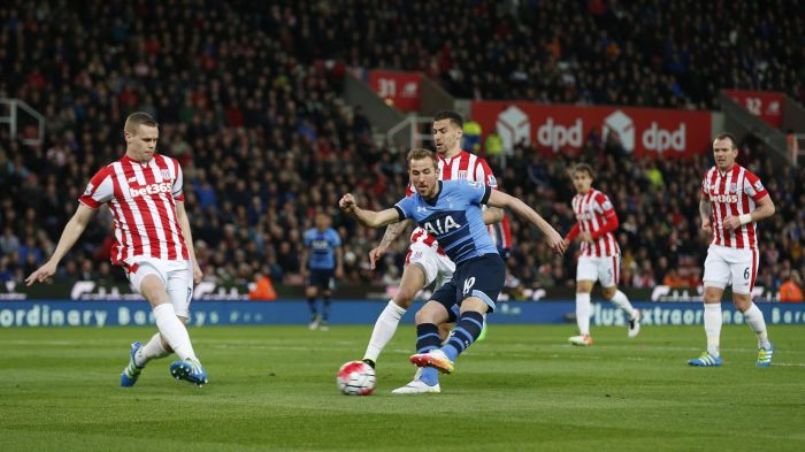 Harry Kane grabbed his first goal of the season and South Korea’s Son Heung-Min scored twice as Tottenham Hotspur romped to an emphatic 4-0 win away at Stoke City on Saturday.

It completed a miserable day for Stoke manager Mark Hughes, who was sent to the stands at the Britannia Stadium for remonstrating with officials when the score was 0-0.

He watched on helplessly as Son gave Tottenham a 1-0 half-time lead before doubling their advantage after the break.

Alli then made it 3-0 before England striker Kane grabbed his first goal in 10 games for club and country.

It might have been so different for Stoke, who now sit bottom of the table without a win in four.

Loan signing Wilfried Bony had almost made a perfect start on his Stoke debut when he found space in the penalty area and exchanged passes with Joe Allen in the opening minutes.

But Bony’s second touch let him down and his eventual shot was blocked.

Stoke then found the net to send a section of the home crowd into raptures, when Marko Arnautovic collected a fine pass from Giannelli Imbula and bent a shot into the top corner.

But most spectators had already spotted an offside flag that halted the Austrian’s celebrations in their tracks.

Another cross by Arnautovic forced a panicked clearance from Ben Davies and Stoke kept up the pressure.

A crisp volley by Glenn Whelan was deflected over the Tottenham bar by Davies before Ryan Shawcross’s header from a corner by Allen was stopped by France goalkeeper Hugo Lloris.

Tottenham’s first chance arrived in the 26th minute when Alli tried a snap-shot from a tight angle, forcing veteran Stoke goalkeeper Shay Given into his first save.

The visitors should have taken the lead on the half-hour when a crossfield ball from Spurs defender Toby Alderweireld caused chaos in the Stoke defence.

A ricochet fell for Alli but he dragged a shot well wide with only Given to beat.

The flashpoint arrived in the 34th minute when Arnautovic was booked for diving and Hughes reacted angrily on the sidelines.

His protests upset fourth official Jonathan Moss, who persuaded referee Anthony Taylor to send the Stoke boss to the stands.

Hughes marched down the touchline to the tunnel while geeing up the Stoke fans, who became even more riled moments later when Alli escaped punishment for what they believed was a dive.

But they were subdued in the 41st minute as the visitors took the lead.

Christian Eriksen found space on the right and turned inside Allen before pulling back a cross for Son to side-foot home.

Both sides had chances early in the second half as Erik Pieters made a sprawling block from an Alli shot before Shawcross fired wide for Stoke from an Allen corner.

But it was 2-0 to Tottenham in the 56th minute when fine footwork and a clever pass by Eriksen set up Son to bend the ball superbly past Given.

And four minutes later, Mauricio Pochettino’s men made sure of the points with an incisive counter-attack.

Kyle Walker galloped down the right and crossed for Alli, who obliged with a simple finish.

Kane then opened his account for the season, taking his time before finishing coolly from a cross by Son. – Agence France-Presse