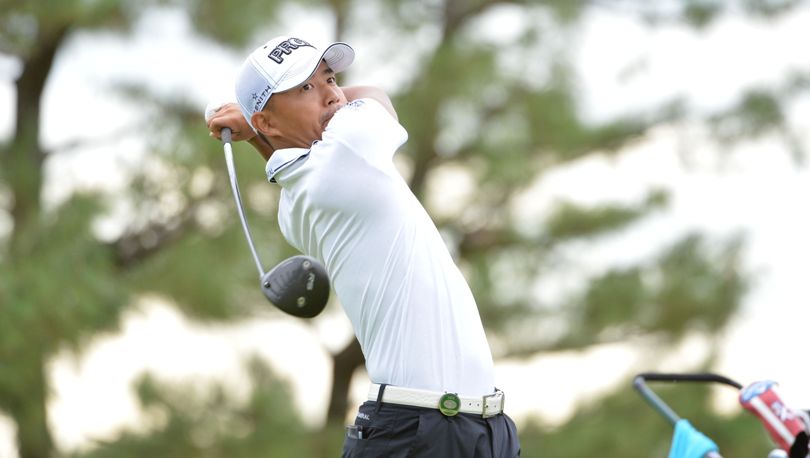 Local prospect Satoshi Kodaira credited his improved putting stroke for a superb six-under-par 64 which saw him lead the opening round of the Asia-Pacific Diamond Cup on Thursday.

The 27-year-old Japanese, who has won thrice on the local circuit, marked his card with seven birdies against a lone bogey to lead by one shot over compatriot Shugo Imahira at the highly-acclaimed Ibaraki Country Club’s West course.

Kodaira, who enjoyed the better half of the weather as the skies opened up in the afternoon with continuous rain,was thrilled to begin his title charge with a solid round where he navigated his way around the course with only 23 putts.

“I felt very calm out there. I missed a few tee shots but I made some good recoveries. My approach shots were good. I had some good saves out there too. I hit my tee shots good for all my birdies today,” said Kodaira.

“I spent a lot of time practising my putting last week. I guess that is why I feel better when I address the ball now. I practiced till dark almost every day last week. My game has improved from last year. I just have to keep trying,” he added.

Phachara, only 17 years old, put up a stellar performance under tough rainy conditions to keep up with the hot pace set by Kodaira. Placed 69th on the Order of Merit, Phachara is aiming for a good result this week to break into top-60 and retain his Tour card for 2017.

“I hit my driver and irons good. I putted well too. Everything was good. I made some long putts for birdies as well. It was really tough out there with the rainy conditions but I think I played my best golf. My main target right now is to finish inside top-60 at the end of the season. Hopefully I can cap a good result this week,” said the young Thai.

Thitiphun set the course on fire when he nailed five birdies in his opening six holes. He stumbled with bogeys on seventh and 10 in the rain but recovered with another birdie on 15 for a back nine 35.

“I had a superb start. I hit the ball so good today. I gained a lot of confidence from there. It was really tough when it started raining on the seventh hole. I think that was the toughest condition I have ever played in. I stayed patient and just try to stick to my game plan,” said the 24-year-old Thai, who claimed his breakthrough win in Bangladesh earlier in February.

Pagunsan, 2011 Asian Tour Order of Merit winner, rode on a hot putter for a commendable round highlighted by five birdies against a lone bogey.

“I putted really well. That was the key for me. I just played shot by shot out there and I think I got lucky at some points. You need to keep hitting it good and keep finding the fairways to score out there. I had a long birdie putt from 15 feet on the par-three 12. That was the highlight for me,” said the 38-year-old Filipino.

Scores after round 1 of the Asia-Pacific Diamond Cup being played at the par 70, 7320 Yards Ibaraki CC course (am – denotes amateur):