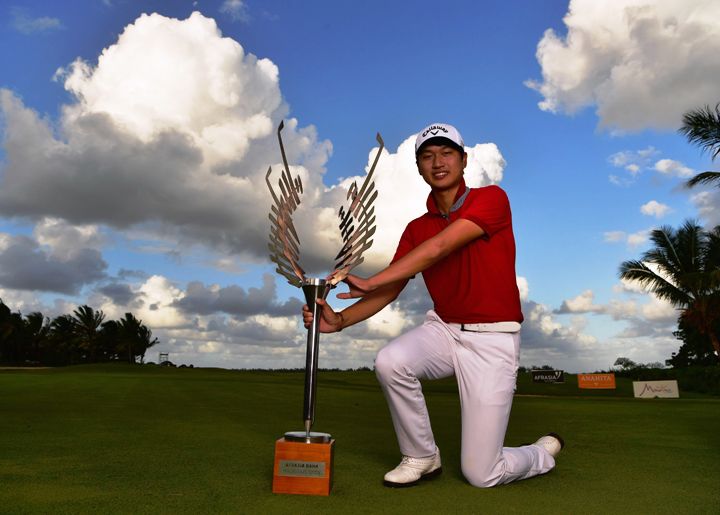 Korean sensation Jeunghun Wang continued his hot streak by claiming his maiden Asian Tour title at the AfrAsia Bank Mauritius Open on Sunday, a week after securing his breakthrough victory in Europe.

The 20-year-old Wang took advantage of overnight leader and Bangladeshi Siddikur Rahman’s late collapse by sinking a crucial birdie on the last to close with an even-par 72 and win by one shot on six-under-par 282 total at the Four Seasons Golf Club Mauritius at Anahita.

Siddikur, who led by one at the start of the day, looked very much in control until a double-bogey on 16 and a bogey on 17 saw him sign for a disappointing 74 to take second place at the €1 million (approximately US$1.09 million) event.

Nicolas Colsaerts of Belgium and Argentine Estanislao Goya shared third place on 288 following respective rounds of 75 and 71 at the AfrAsia Bank Mauritius Open, which is the first tri-sanctioned event by the Asian, European and Sunshine Tours.

Wang was overwhelmed with joy following his remarkable victory. “I can’t believe that I’ve won two weeks in a row. I’m so excited right now and really happy that I have won. I probably had luck on my side today. I wasn’t even thinking about winning this week until the 16th. I missed a lot of putts so I thought I didn’t have any chance,” said the young Korean.

Wang took home the winner’s prize purse of US$189,841 which moved him up to second place on the Asian Tour Order of Merit.

“I hit my second shot into the 18th well, but it just went off the green. I was just trying to make par, but I hit the bunker shot close and gave myself an easy putt for a birdie. It was fantastic. I would love to make the Olympics. It’s crazy because I wasn’t even thinking about it until last weekend. It would be an honour to represent my country in Rio but I will have to continue playing well to qualify,” Wang added.

Siddikur was disappointed with his late wobble but took consolation for capping what was his best result so far this season and to give himself a fighting chance to qualify for the Olympic Games this August.

“It was good until the 16th, but unfortunately I don’t know what happened. I went out of bounds with the first shot. I gave my best. It’s part of the game. I was trying to hole that chip on the last for eagle. It was a good chip but the putt for birdie wasn’t good. It just wasn’t my day. I am really happy to finish second,” said the 31-year-old Bangladeshi.

“It’s still a good experience for me. I didn’t expect to play well coming to this week. This is a good boost for me on my world rankings. Hopefully I can get back in the running for Olympics. I will take the positives from this week,” added Siddikur.

Scores after round 4 of the AfrAsia Bank Mauritius Open being played at the par 72, 7401 Yards Four Seasons GC course (am – denotes amateur):