Home News Others Spectacular Hayden Wins in the Wet 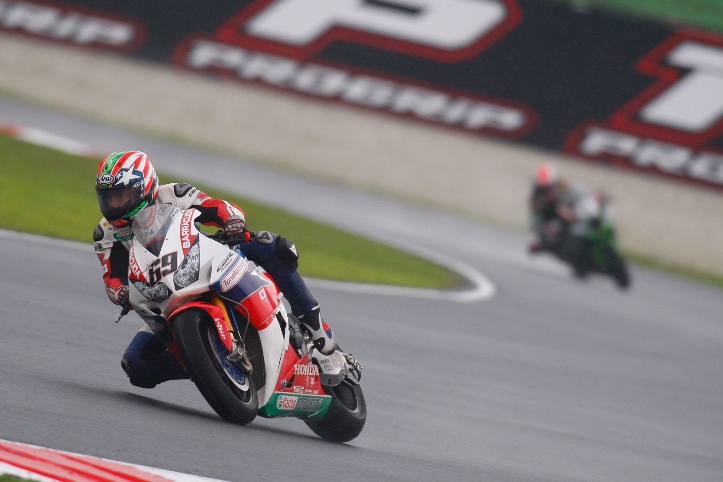 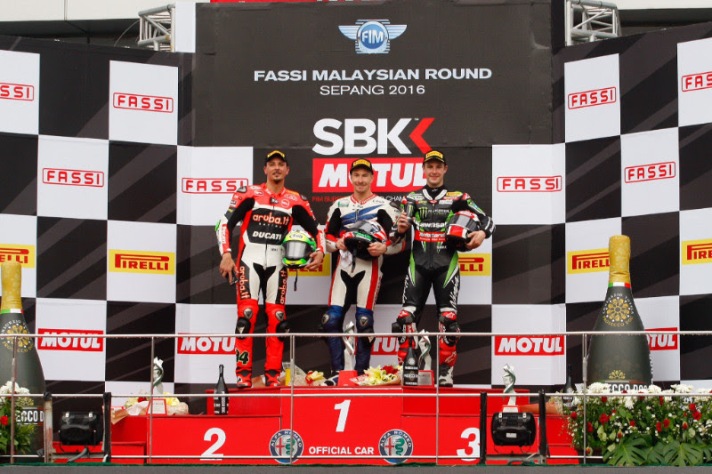 Honda World Superbike Team rider Nicky Hayden crossed the line in Sepang on Sunday to take his first ever win in World Superbike. The American, a rookie in the class, took off from the pack in a supreme display of speed and control in difficult conditions. Ducati’s Davide Giugliano came home second after a late charge, ahead of reigning Champion Jonathan Rea.

Sunday in Sepang saw sun replaced by rain as a downpour hit the circuit just before the WorldSSP Race was due to start. As the weather conditions worsened and the World Supersport Race was postponed until after WorldSBK, the riders had a long look at the sky in preparation for a Wet Race.

A cautious line up threaded through turns 1 and 2 for the first time as the front row of Sykes, Rea and Lowes was joined by Honda rider Nicky Hayden from the second row. Hayden, who is a veteran of the track but a WorldSBK rookie, then began to pull a gap on second placed Rea as riders behind battled for position.

With grip tricky to judge, only Kentucky Kid Hayden seemed confident in the initial laps, with Rea remaining behind in P2 as Lowes and Sykes struggled to find similar pace. With the top three settled as Hayden, Rea and Davies, it was second Aruba.it Racing – Ducati rider Davide Giugliano who then began to set the fastest laps of the track and caught teammate and title contender Davies. After shadowing the Welshman, Giugliano then made his move and took the position, then heading off after Nicky Hayden in pursuit of a victory. The Italian came home P2 after the late charge, as Rea passed Davies to lock out the podium in P3, ahead of his Welsh title rival who crossed the line in P4. Defending Champion Rea remains the only rider on the grid to have been on the rostrum in every race.

Honda’s Michael van der Mark moved up from his P10 grid position to end the race in P6 after a spectacular last corner against Alex De Angelis after a race of spectacular duels, with Aprilia rider De Angelis also making good progress from his starting position as he recovers from injury.

Tom Sykes, after starting from pole, suffered in the conditions in Race 2 in Malaysia and eventually crossed the line in P8. Anthony West, riding as replacement for Sylvain Barrier at Pedercini, lived up to his reputation as a maestro of wet conditions as the Australian came home in the top 5, giving the team their best result of 2016 so far and proving second Kawasaki on Sunday.

Leon Camier, after another top ten result in Race 1, came home P9 in the wet on Sunday afternoon, with Markus Reiterberger completing the top ten for Althea BMW after a mechanical problem forced the German to retire in Race 1 on Saturday. Pata Yamaha rider Alex Lowes, after starting from his best qualifying position, suffered a crash in Race 2 and has been diagnosed with a closed fracture of his collarbone.

Sepang saw Rea increased his title lead once again as the grid shuffle around him, with the paddock now heading to Donington Park for Round 7.