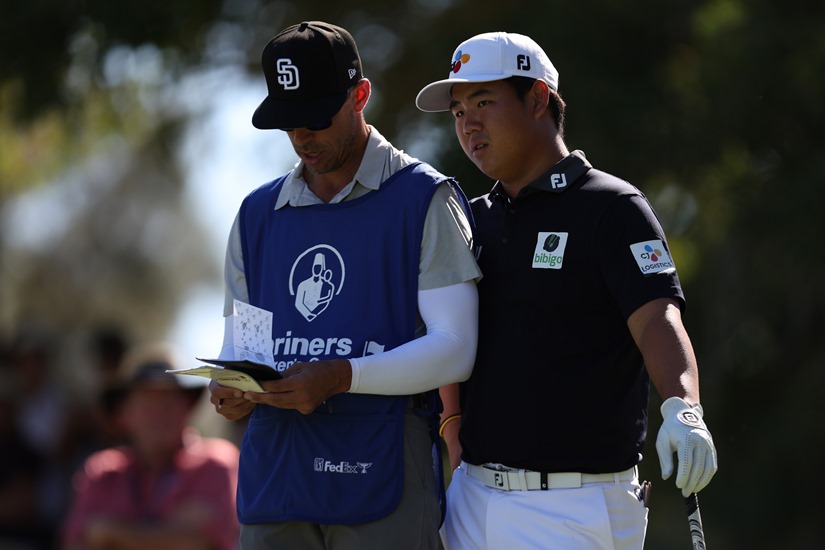 Korea’s Tom Kim boosted his hopes of winning a second PGA TOUR title in four starts when he signed for a flawless second-round of 4-under 67 to share third place with compatriot Si Woo Kim at the Shriners Children’s Open on Friday.

The 20-year-old Tom, who won the Wyndham Championship in August and starred at the recent Presidents Cup, fired four birdies on his front nine at TPC Summerlin to reach the halfway mark on 10-under 132 and sit two shots behind 36-hole leader Mito Pereira of Chile.

Si Woo brilliantly bounced back from a triple bogey on the par-4 12th by responding with a ‘Shot of the Day’ eagle and a birdie at holes No. 15 and 16 to salvage a solid 68, having birdied three of his five opening holes.

Compatriot S.H. Kim, who graduated from the Korn Ferry Tour,  was two strokes back in joint ninth on 8-under after returning a 69, while defending champion Sungjae Im will enter the weekend in T17 place after a 70 to sit on 135.

Pereira, who also featured for the International Team at the Presidents Cup, seized a one-shot lead on 12-under following a splendid 63, with Robby Shelton matching his effort to come in solo second.

Tom continued to show that he is a star in the making with another consistent display. His four birdies came in the opening seven holes, including hat-trick of gains from the fifth, with the longest putt being a 22-footer on the par-3 fifth.

He was pleased with how things panned out for him despite a quiet back nine. “I had a great first nine holes. I just got really mellow. I just didn’t make any birdies and closed out with ten pars in a row,” he said.

“It was pretty boring after nine, but I hung in there and kept myself in it, I think that was the biggest thing, not losing it right away. I stayed really patient and gave myself a good spot going into the weekend.”

Si Woo survived a roller-coaster round which saw him make up for the three shots squandered at No. 12 after hitting his third shot into water.

Undeterred, the 2017 PLAYERS Championship winner, swiftly recovered the first two strokes back by brilliantly holing out his greenside bunker shot for eagle on the par-4 15th hole.

He kept his form going on the 560-yard par-5 16th with a fourth birdie of the day after hitting the green in two to moveback to 10-under.

“It was a great bounce back from triple. I just tried out my play, and I think I was really lucky, and I think that really helps,” said Si Woo.

“(On the triple bogey) I had a little between numbers and then hit a little pull hook. I think always pull hook is a little bit further, so I miss it. I just missed the one shot and then kind of had a tough lie. Then I had a bad chip and then make triple. But Manny (Manuel Villegas), my caddie, said keep it positive and we can get back. Yeah, I kept positive and just played my own.”

Byeong Hun An of Korea and Kevin Yu of Chinese Taipei also made the cut after both returned matching 68s for T38 while K.H. Lee bounced strongly with a 66 to improve 56 rungs to T61.

It was the end of the road for the Chinese trio Carl Yuan, Xuewen Luo, who had Monday qualified for the event, and Marty Zecheng Dou as they missed the halfway cut set at 138.