Home 2022 Korea’s Kim just shy from being PGA TOUR-bound with T6 finish at... 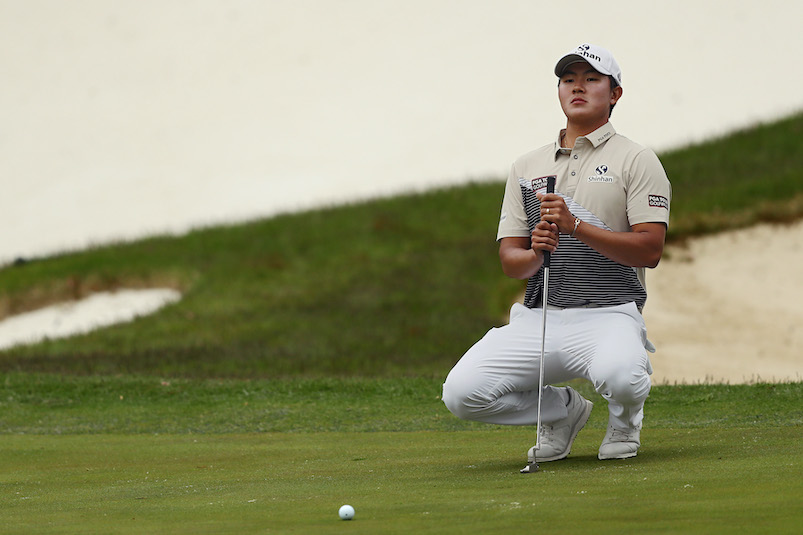 Korea’s Seonghyeong Kim will need to wait another week before he can pop the champagne.

The 23-year-old Korean inched closer to the 900-point threshold the Korn Ferry Tour is using as its fail-safe for players to earn their PGA TOUR cards after finishing in a three-way tie for sixth place at the Huntsville Championship on Sunday.

He needed to finish in a two-way tie for sixth or better to surpass the threshold and narrowly missed his target with a final round of even par 70 to finish on 8-under 272, and eight strokes back of winner Harrison Endycott of Australia.

A graduate from Qualifying School last year, Kim, who has won once each on the Korean Tour and Japan Golf Tour, fell 0.89 points shy of the threshold and now needs to only make the cut and finish another event to put his hands on one of the 25 PGA TOUR cards on offer during the Korn Ferry Tour Regular Season.

Compatriot Byeong Hun An missed the halfway cut at The Ledges course and will also have to wait to the next tournament to secure his PGA TOUR return. He had needed to finish in a two-way tie for 35th place or better to reach the 900-point mark.

After opening with a blistering 64, China’s Marty Dou carded a third successive 70 to finish on 6-under in tied 13th place and solidified his position in the Top-25 ranking at 11th position. The 25-year-old is looking to join countryman Carl Yuan on the PGA TOUR next year, with Yuan already PGA TOUR-bound following one win and three top-10s this season.

Endycott, meanwhile, was over the moon Sunday as he earned his maiden Korn Ferry Tour title. He was not ever sure he would win in the United States, or ever win again for that matter. The 25-year-old last won in 2016, when he was still an amateur, and Endycott described much of his roughly five-year professional career as “frustrating” multiple times this week.

All those frustrations were put to rest at The Ledges, as Endycott closed out a five-stroke victory at the Huntsville Championship with an even-par 70, capping the final round by draining an 11-footer for birdie on the 72nd hole to finish at 16-under par.

“I’ve just worked so hard, I’ve just had a lot of disappointments in my life,” Endycott said via the Korn Ferry Tour’s 72nd hole livestream. “I never thought I’d win over here. There was a time where I (asked), did I ever think I was actually going to win again? It’s very special. I can’t believe I just got it done this week. I’ve been so frustrated at golf for a long time, and it finally happened.

“It’s just a long journey here, and we dealt with a lot of real hardships, our family. Sadly, I lost my mum to cancer in 2012, and sadly last week I lost my grandmother, too. The timing of this win is just really special.”

Endycott built the five-stroke lead with an opening 7-under 63, tying an 18-hole tournament scoring record which held up the entire week, followed by a 3-under 67 and 6-under 64.

He concluded a decorated amateur career with five individual victories in the 2016 calendar year, highlighted by a win at the prestigious Porter Cup, and a team win for Australia alongside future PGA TOUR winner Cam Davis and future Korn Ferry Tour winner Curtis Luck at the 2016 World Amateur Team Championship. Shortly after a top-10 at the 2017 Asia-Pacific Amateur, Endycott turned professional and debuted at the New South Wales Open Championship in November 2017.

The 2022 Korn Ferry Tour season continues Thursday with the first round of the Simmons Bank Open for the Snedeker Foundation, hosted by The Grove in College Grove, Tennessee.