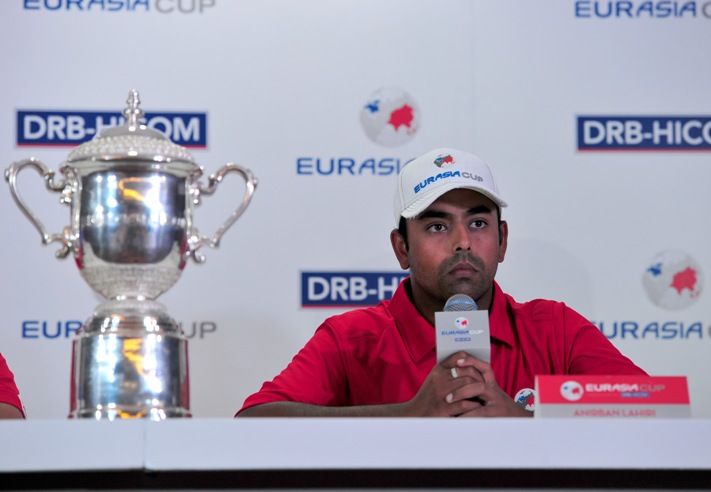 India’s Anirban Lahiri believes the ‘13th’ member of Team Asia will be decisive when they go into battle against Team Europe at the EurAsia Cup presented by DRB-HICOM which begins on Friday.

The newly-crowned Asian Tour Order of Merit champion issued a rallying call to Malaysian golf fans to come out in numbers and support Asia’s quest to beat Europe at the Glenmarie Golf and Country Club. The inaugural showdown ended in a thrilling 10-10 draw in 2014.

“I would really want to have a 13th member on the golf course with us, which is the crowd, the people of Kuala Lumpur and the people of Malaysia,” said Lahiri, who won the Malaysian Open last year.

“Come out and support us. We need you. It gives us the advantage of being at home, and that’s going to make a big difference come Sunday.”

The 28-year-old Lahiri is happy to return to familiar winning ground where his victory here at the start of last season ignited a magical run which saw him achieve numerous other feats, including a second title at the Hero Indian Open, a top-five at the PGA Championship, a debut appearance at the Presidents Cup and earning a PGA Tour card.

“Personally, the EurAsia Cup is a very important event for me. I started to gain a little more confidence and momentum after the event,” said Lahiri, now ranked 43rd in the world.

“My personal performance on the last two days, Saturday and Sunday, really helped my self-belief. I’ve taken that over the last 34 months, and obviously it’s been fantastic for me,” added the Indian, who contributed two points from out of three matches in 2014.

He believes this year’s Team Asia, which includes six players in the world’s top-60, was stronger than the inaugural side. “I think the first really good sign is that Europe has sent a much stronger team. So what does that tell you? It tells you that we are strong enough and they are not going to take any chances. They thought they would send a ‘B Street’ team and roll over us and that didn’t happen. That raised a lot of eyebrows,” he said.
“Moving on, obviously two years later, I think the Asian Team is a lot stronger than it was two years back. So if the Europeans have sent a stronger team, it’s because they know that we are stronger, as well. So our job here is to play our best and to get 12 and a half points and I think the entire team believes that we can do that.”

Thailand’s Kiradech Aphibarnrat, who also featured in the inaugural EurAsia Cup in 2014 and contributed 1.5 poitns, is confident Team Asia will rise to the occasion following their epic 10-10 draw two years ago.

“The way we fought back two years ago was incredible. We showed how strong we were mentally,” said the 2013 Asian Tour number one.

“The players in the team are definitely stronger this year and it’s going to be really tough for us to be beaten now,” said Kiradech.

The two-time Asian Tour winner won twice in China and Scotland last year and also finished in a career high of 38thplace on the world rankings.

“I’ve been playing good golf since the last EurAsia Cup. Malaysia always feels like a second home to me as I got lots of support and friends here. I’ve got a good record in Malaysia and I’m sure that’s going to continue,” said Kiradech.

Meanwhile Malaysia’s Nicholas Fung is raring to go and fire the first salvo on the opening day.

“We’ll try to get as many points as we can on the first day. If we can win at least five games, that would be good. It’s not easy but if we our partnership right, anything can happen,” said Fung.

Korea’s K.T. Kim, who featured in the 2011 Presidents Cup, agreed with Fung and is ready to bring his match play experience over to his EurAsia Cup debut. “I believe the Fourball matches are the most important. In the second round, I’m sure Jeev will pick the best matches and we have to focus on doing our best.

“Europe has a strong line-up but so does Asia. Everyone in the team is a good player and it’s all about coming together and playing to our strengths. We’ll do our best,” said Kim.