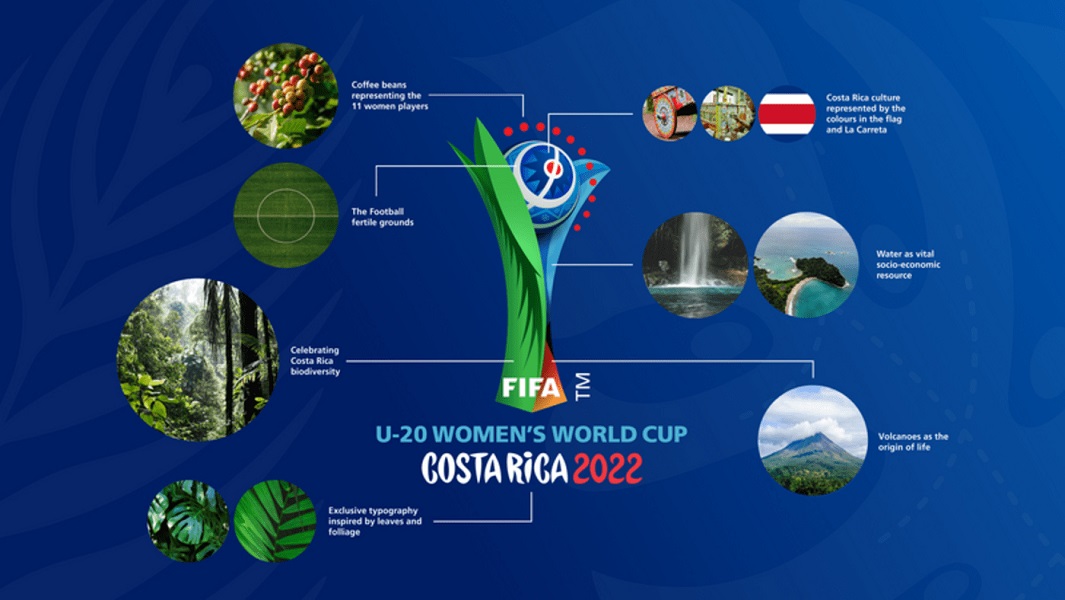 The official emblem and slogan for the FIFA U-20 Women’s World Cup Costa Rica 2022™ were unveiled this week.

Joining women’s football icons and young players across Costa Rica, representatives from the Local Organising Committee, local government and U-20 women’s national team united at a special ceremony in a show of solidarity and support to launch the vibrant new Official Emblem and Slogan.

The new tournament slogan and emblem aim to unite through the power of football and inspire future stars of women’s football, as well as a new generation of women and girls across Costa Rica, the wider region and around the world.

Incorporating distinctive red and blue flashes of colour from the Costa Rican flag and the expressiveness of a traditional carreta, the iconic new emblem for the FIFA U-20 Women’s World Cup 2022 also features design elements inspired by Costa Rica’s rich biodiversity and vibrant culture.

The official tournament slogan – Vamos Juntas – is a statement of sisterhood, sustainability and legacy, a natural calling that fans, players, teams, the whole of Costa Rica and the entire global football community can use to unite behind, sharing their collective passion for football and celebrating the future of the game.

Keylin Gómez, Costa Rica U-20 national team player said: “Costa Rica is very excited and happy to host the FIFA U-20 Women’s World Cup 2022. We took a very important step with the launch of the new slogan, which will unite us and always remind us that together we are stronger.

“We look forward to the tournament’s kick-off on 10 August next year with great enthusiasm, because that is when we will begin a new chapter in our history and take centre stage. Vamos Juntas!”

Speaking about the launch, Sarai Bareman, FIFA Chief Women’s Football Officer said: “The FIFA U-20 Women’s World Cup 2022 is the perfect platform for a new generation of football stars to further grow and blossom. It will be a tournament that will showcase the world’s best upcoming talent in women’s football, many of whom will hope to go on to even greater things in Australia and New Zealand in 2023.

“The vibrant new Official Emblem and Slogan aim to unite exciting and symbolic elements of Costa Rican culture while representing the rich natural elements and biodiversity of the country. We look forward to an exciting tournament, one which will inspire and leave its mark in 2022 and beyond.”

For his part, the president of the Local Organising Committee and the Costa Rican Football Association Rodolfo Villalobos added: “A year from now, Costa Rica, for the second time in history, will host a Women’s World Cup, this time at U-20 level. We are honoured to have the opportunity to welcome you to our striking and unique country. “Our main goal will be to promote women’s football and lay even stronger foundations within Concacaf. I am very proud of FIFA’s team and the Local Organising Committee, whose work guarantees a World Cup of excellence, a legacy based on the values of sisterhood, solidarity and sustainability.” – www.fifa.com