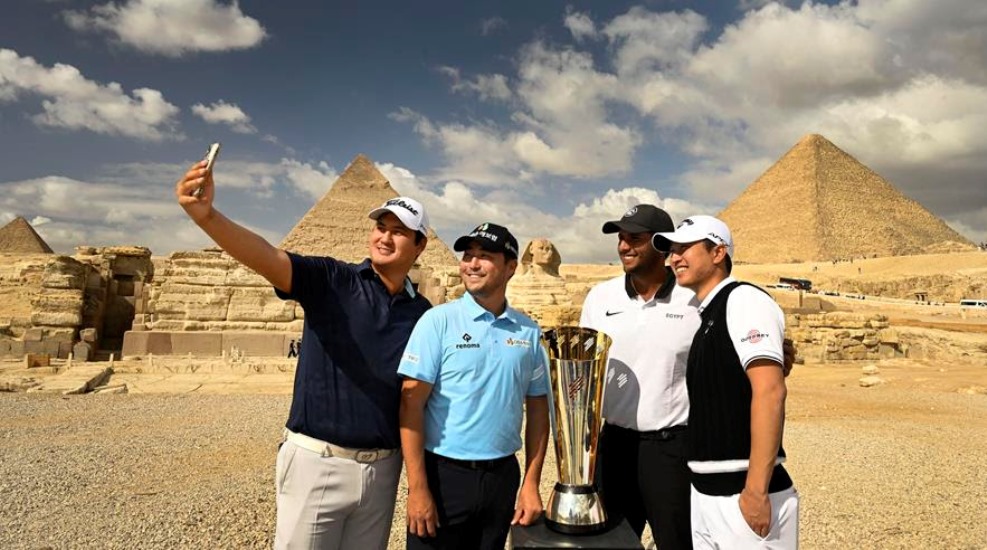 There is no hiding Richard T. Lee’s look of disappointment at the moment after he let victory narrowly slip from his grasp last Sunday but a trip to the Pyramids on Tuesday morning ahead of this week’s International Series Egypt, at Madinaty Golf Club in Cairo, has certainly helped to put a smile on his face.

“Egypt has been on my wish list since high school, I just wanted to come here and check out the Pyramids. It was amazing just to see it, right there in front of my eyes,” said the Canadian, who visited the iconic and world-famous Giza Pyramids in Cairo with American Sihwan Kim, Korean Jeunghun Wang, and local player Isaa Abuo El Ela.

Lee was on the brink of winning the International Series Morocco two days ago but made a costly bogey on the driveable par-four 17th and lost by a shot to Thailand’s Jazz Janewattananond – who finished sensationally with an eagle and a birdie.

Added Lee: “To be honest I got a bit unlucky on 17 as my second shot was blocked. I pulled my tee shot slightly and it ended right behind a tree so I could only advance it forward a little bit.”

He was attempting to claim his third title on the Asian Tour, to add to his wins in the Solaire Open in 2014 and the 2017 Shinhan Donghae Open.

Nevertheless, it’s has been a big season for the 32 year old so far as he also finished joint second in the International Series Singapore in August.

“I just want to take the good things from there [Morocco] and have a good week this week and play my best,” he said.

“I am just going to play my game; I feel my game is pretty solid right now; I am playing smart golf. Hopefully I can get that win.”

Last year he was dogged by injuries to his shoulder and knee, which he feels might have been the result of COVID-19 treatment.

He said: “I am not completely sure what caused the injuries, I think it could have been something to do with the vaccines. I didn’t have any injuries playing golf, it’s just that all of a sudden they came.

“I have been eating well and doing a lot of work outs. It’s getting better, my body is getting back into shape.”

Rising Spanish star David Puig competes this week having also come close to winning in Morocco – which was his first event on the Asian Tour and second as a professional.

He led by two at the start of the final round before finishing in solo possession of third, two back from Jazz.

“Obviously, leading going into the final round my main goal was to win, but at the end of the day it’s golf,” said the 20 year old, who opted to not complete his final year on the Arizona State University golf team in order to play for pay.

He added: “I think I was pretty steady the whole day, I played pretty good. I just didn’t hit the ball as close as I would like, but I hit it very good and didn’t putt my best as well. But I hung in there and I had a chance until the last hole so as I said overall I’m pretty happy with my result.

“As I said last week I don’t like tight courses, but my driving accuracy as well as my driving distance was pretty good during the whole week. So not seeing trees and instead seeing big fairways, it’s gonna be good because you’re more relaxed sometimes. But at the same time, at the end of the day, it’s just golf. You just gotta try to make birdies.”

His fine performance allowed him to secure his Asian Tour card for next season.

This week’s tournament marks the first time the Asian Tour has visited Egypt. The US$1.5 million event is the third from last event of the season with just the Bangabandhu Cup Golf Bangladesh Open and Indonesian Masters, which is part of the International Series, remaining.