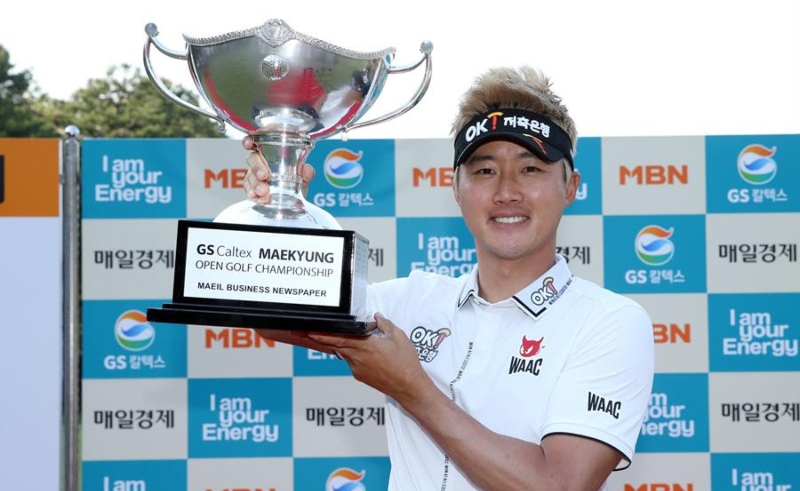 Korea’s Taehee Lee successfully retained the trophy on home soil after prevailing on the third extra hole to complete a wire-to-wire victory and claim his first Asian Tour title at The 38th GS Caltex Maekyung Open Golf Championship on Sunday.

Lee, who shared the overnight four-shot lead with Finland’s Janne Kaske, was locked in a tight battle with the Finnish throughout the day as they closed with matching even-par 71s to tie on nine-under-par 275 after the end of regulation play at the Namseoul Country Club.

It was a birdie from six feet on the 75th hole that sealed the deal for Lee as Kaske was left to rue a bad break on the 18th fairway after his drive found a divot and his second shot would end up 20 yards short of the green. Kaske eventually three-putted for a double-bogey.

The duo had made respective double-bogeys and bogeys on the first two holes of the play-off, held on the 433-yard par-four 18th hole, before officials made a rare decision to change to a relatively easier pin position on the green.

Lee got off to a quick start with two birdies in his opening four holes while Kaske reeled in four straight pars. Kaske sank his first birdie of the day on fifth to move within one before turning the table around on the seventh after holing an amazing second shot from 120 yards out for an eagle-two.

It was a three-shot swing for Kaske as he took over the two-shot lead from Lee, who dropped a shot on the same hole. Kaske would go on to drop a shot on the ninth but recovered well with a birdie on 12 after knocking his second shot from the right rough to about two-feet.

However, another bogey on the 14th saw him slip back into a share of lead again with Lee, who chipped in for birdie on the par-five hole. The duo went neck and neck coming down the stretch, both dropping shots on 16 and 17.

An errant drive from Kaske on the 72nd hole saw his second shot from the fairway bunker land just short of the green. He attempted a long putt for birdie from the fringe but the ball rolled about 30 feet past the hole. However, Kaske held his nerves and made that clutch putt to ensure his place in the sudden play-off.

Korea’s Daehyun Kim returned with the day’s best score of a 65 to take third place on 276 while last year’s winner Sanghyun Park settled three shots back in fourth following a second consecutive 69 at the storied event.

Thai star Prom Meesawat battled to a 68 to take seventh place on 280 while compatriot Phachara Khongwatmai improved his tied-12th finish last year by signing for a 73 to settle a further shot back in joint-eighth at the event, co-sanctioned by the Asian Tour and the Korea Golf Association.

When I was on the course, I had strength, but when I finished, I felt really relieved.

Every hole was memorable. I think my birdie on the 14th hole was the turning point. I actually told my family not to come out today because of the dust and pollens out there but they still came to support. I am really happy.

I just focused on my game out there. I tried to think well. We just kept the game going. I am very happy to win such a big tournament. I am now going to aim for the KPGA Order of Merit title now.

After missing shots, I told myself that “This is Nam Seoul Country Club”. I was angry to miss shots out there but I managed to recover before going on to the next hole. I just wanted to make the putts.

My caddy helped me a lot out there. He’s like a brother to me and we practiced a lot together on this course. He is also a professional golfer but he didn’t qualify for this tournament. We told ourselves to stay focused out there.

Today is the most beautiful day of my life. It’s a moment that I will treasure forever. I am thinking of going to play on bigger Tours like the Asian and European Tours.

I had a three-footer to win the tournament and he had like two putts from 10 feet to win. There’s just so much to talk about. We keep giving our chances away. We both could have won it. I hit a good drive on the third play-off hole but landed in a sandy divot.

It was a terrible lie and I couldn’t get a contact with it but Lee hit it nicely to birdie the hole and win the tournament. The eagle was definitely the turning point for me. I made a solid par putt from about 30 feet on the 18th in regulation play to ensure I’m in the play-off.

It was like a surreal feeling, given the hole location today. It was good to give myself a chance but I don’t know what to say right now. We both had a chance. I can’t analyse this. It’s still a good result for me, my best result on the Asian Tour so far.

This should help me keep my card for next year as well. Obviously, I would love to win but my goal for this year was to keep my card so I’ll take the second-place finish. I am heading to Japan for the Diamond Cup next week.

I made a 40-footer for birdie on the third hole and that gave me a lot of confidence. I was just riding on the good momentum from there. I hit it close for the other birdies but it was difficult coming down the stretch, especially the last three holes.

I was prepared for it. I know this course and I know it was going to be tough coming back. I have been hitting the ball good all week actually. Just managed to make some putts today. I am really pleased with my result, it’s a second top-10 finish for me this season.

This should give me a little boost on the Order of Merit. I’m heading to Japan for the Diamond Cup so hoping to carrying on the good form. I have been playing well since winning the Asian Development Tour (ADT) event in Brunei last week.

Scores after round 4 of the The 38th GS Caltex Maekyung Open Golf Championship being played at the par 71, 7039 Yards Namseoul CC course (am – denotes amateur):