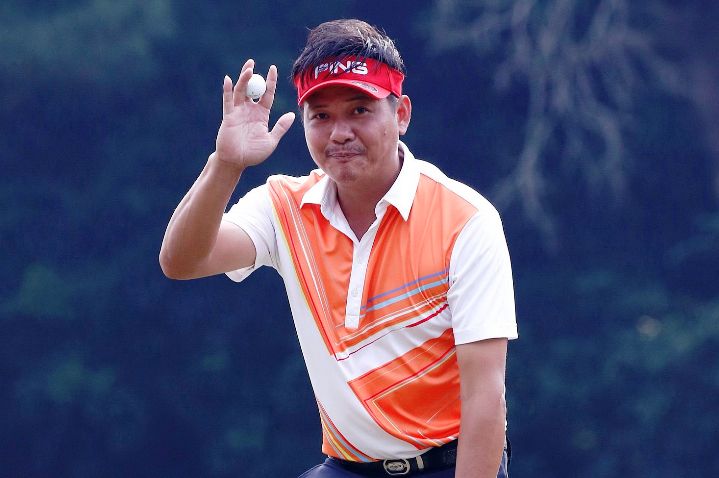 Lin Wen-ko took advantage of his home course knowledge when he fired a stunning seven-under-par 65 to lead in the opening round of the Ambassador ADT on Thursday.

Lin, the younger brother to Wen-tang and a former Taiwan Masters champion, returned with a bogey-free round highlighted by seven birdies to open-up a three-shot lead over Hsu Hao-sheng at the Hsin Feng Golf and Country Club.

Defending champion Chan Shih-chang fired a 70 while Wen-tang, fighting for an Olympic berth posted a disappointing 74.

Lin has struggled to replicate his 2003 Taiwan Masters victory where he defeated Thai legend Thongchai Jaidee but he is now in good position to secure a first ADT win.

He turned in 34 and produced late fireworks when he sank five birdies in his closing seven holes to top the leaderboard in blustery conditions.

“I know this course so well and it is very windy. So the secret is to find the fairway and you will have a scoring chance. It is difficult to judge the wind direction so I hit low and slow drives. You don’t need to hit it hard here,” said Lin.

“This might be my home course but this is the best score I’ve shot here! I’m glad I’m on top the leaderboard. Obviously the staff here are happy to see a local boy leading but we have three more days to go,” he added.

Tour rookie Veerman of the United States, who turned professional last year, continued his fine form as he has three top-five results in his last three appearances on the ADT.

“I played really good. It is tight off the tees and the greens are small. I’m glad I shot a 69 here. When the course is this tight with so many trees, you have to keep the ball in play to have a shot at birdies and I did just that,” said Veerman, who turned 24 on Tuesday.

Byrne, a two-time ADT winner and former Walker Cup player, was disappointed not to return with a lower score after struggling with the putter.

“It is a good score in the wind but I left a lot of shots out there especially on the back nine (started from 10th tee). I didn’t capitalise at all and let a good round go. I hit the ball really well but didn’t hole anything.

“I was on the green in two on all the par fives but didn’t make up-and-down. I’m really disappointed with the putting,” said Byrne.