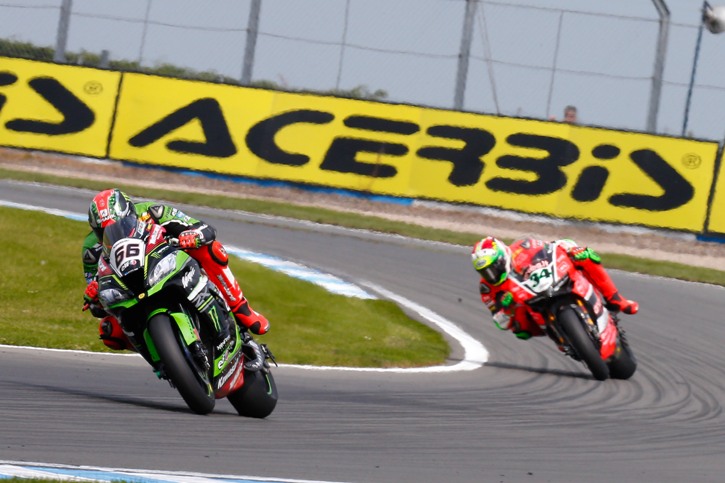 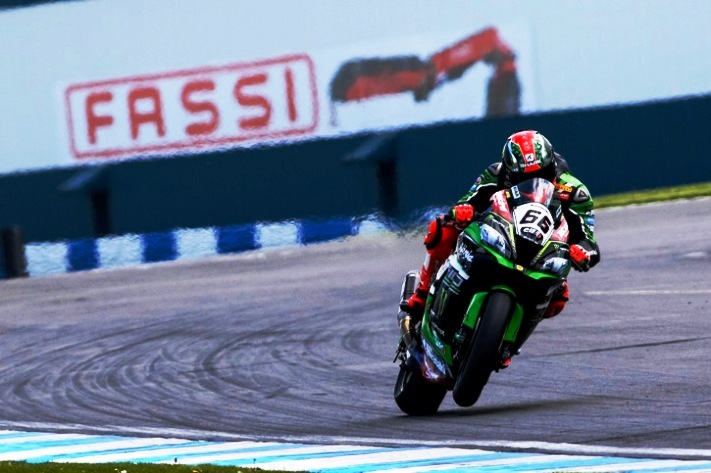 KRT rider takes Race 1 as the drama unfolds around him

Kawasaki rider Tom Sykes has taken victory in Race 1 at Donington Park, his seventh in a row at his home track. Ducati’s Davide Giugliano came home in P2 and reigning Champion Jonathan Rea completed the podium in third in a drama-filled race.

Ducati rider Chaz Davies got the best launch off the line in Race 1 from the middle of the front row, diving down the inside to take polesitter Tom Sykes into Turn 1 and leading the pack in the initial stages. After a mistake from Sykes saw the Yorkshireman demoted down to P4, the two Ducatis were chased by Jonathan Rea for the lead, with Sykes fighting to recover.

Drama for both the Race and title fight hit soon after as Davies lost the front end of his Ducati, sliding out of the lead and leaving teammate Davide Giugliano to fend off the KRT attack led by Rea. The reigning Champion then made a mistake of his own at T12 and found himself chasing down a five second gap to the frontrunners, first getting past Lorenzo Savadori.

As Davies fought back into the top ten and then suffered another crash to end his race early, Tom Sykes caught Giugliano and a close battle ensued for a number of laps, with the Yorkshireman eventually taking over at the front and making the move stick.

The six-time winner at Donington then concentrated on making a gap and crossed the line 2.8 seconds clear of the Italian to take his seventh win in a row at the Derbyshire track. Defending title holder Rea completed the podium in third after some difficult moments that saw the reigning Champion unable to close down on the two leaders.

Lorenzo Savadori, after an incredible front row start on his Aprilia, rode a solid race until a mistake in the last few laps saw him caught by Nicky Hayden and Leon Camier and the Italian got bumped down to P6. MV Agusta rider Camier fought with the American in Camier’s home race, eventually diving up the inside and just beating Hayden over the line. Sepang winner Nicky Hayden, after graduating from Superpole 1, struggled for pace throughout some sessions, before finding good consistency in the race and moving up from his grid spot.

Althea BMW rider Jordi Torres, after a good start, then found himself hunted down by Honda rider Michael van der Mark as the Dutchman fought back from a difficult qualifying. Only separated by two tenths for a number of laps, Spaniard Torres just held off the attack of the Honda rider as the pair crossed the line in P7 and P8 respectively.

Karel Abraham came home in the top ten for Milwaukee BMW in their home race, ahead of Pedercini replacement rider Ant West, who completed the top ten despite contact with Alex De Angelis as the San Marinese rider tried a move up the inside. Cameron Beaubier, after an impressive qualifying as replacement rider at Pata Yamaha, sadly crashed out and will be hoping to make amends in Race 2 and come home in the points.