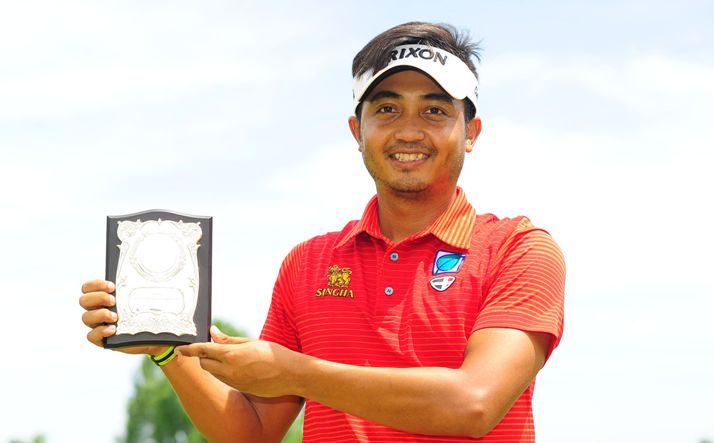 Thailand’s Panuwat Muenlek secured his third Asian Development Tour (ADT) title and second win of the season with a come-from-behind one-shot triumph at the PGM Port Dickson Championship on Saturday.

Panuwat, who turns 31 years old tomorrow, earned himself an early birthday present after signing for a flawless six-under-par 65 highlighted by six birdies to win on 14-under-par 270 total at the Port Dickson Golf and Country Club.

Jakraphan Premsirigorn, also of Thailand, matched his closing efforts to settle for second place with Singapore’s Johnson Poh, who carded a second consecutive 67 to cap his best result on the region’s burgeoning Tour at the RM200,000 (approx. US$46,600) event.

Malaysia’s Gavin Green, who held a one-shot advantage heading into the round, missed out on his third win of the season to earn his Asian Tour card for the remainder of 2016 after closing with a 71 to finish four shots back in fourth place with Australian David Gleeson (68).

Sweden’s Oscar Zetterwall returned with the week’s best score of 63 to take sixth place on 275 with 2013 ADT Order of Merit champion Nicholas Fung of Malaysia, who carded a 70 at the PGM Port Dickson Championship, which is the 15th leg of the ADT schedule this season.

Panuwat, who trailed by two shots at the start of the day, produced a gutsy performance as he birdied the last two holes to take home the winner’s prize purse of US$8,618 and receive six Official World Golf Ranking (OWGR) points.

“This is a great birthday present for myself. Everything was good for me today. I felt very confident out there. I missed a three-footer and a six-footer for birdies on 15 and 16 respectively but I hung in there. I told my caddy we will try to birdie the last two holes and we did it,” said Panuwat.

“This is not an easy course. It is very narrow but it suits my game. I hit it good off the tee and I putted well. I guess playing in the second last group helps too as I didn’t really feel the nerves,” added the Thai, who just claimed his second ADT victory last month.

Despite being denied of a maiden ADT victory, Poh took in the positives as he capped his best result on the burgeoning Tour. The 24-year-old Singaporean fired three birdies against a lone bogey to turn in 33 and added two more birdies on 14 and 16 before missing a 20-feet birdie putt on the last to miss out on a play-off with Panuwat.

“I have stick to my game plan and it was great. I made some really good putts and I am very happy with my game. I focused on my game and did what I needed to do,” said Poh, who has enjoyed an illustrious amateur career prior to turning professional in 2015.