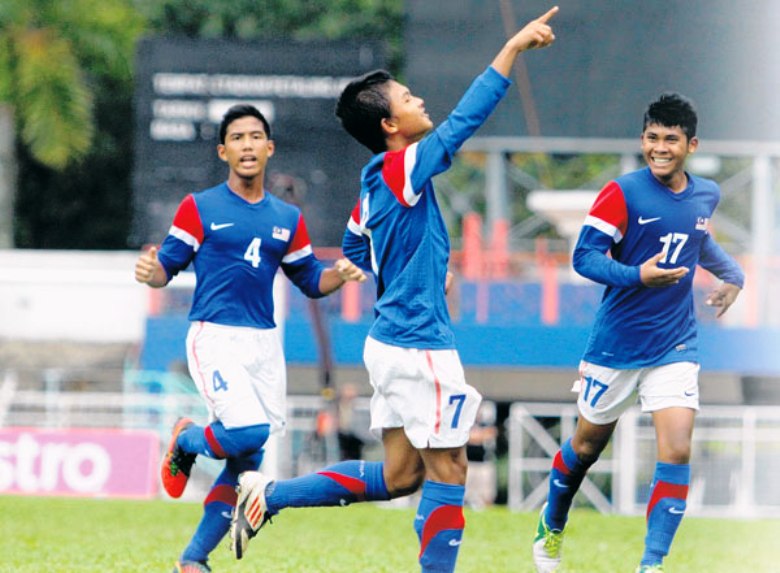 Fresh from their success in winning the Asia Champions Trophy, Malaysia got off to a roaring start in the AFC Under-16 Championships with a 1-0 win over hosts Thailand at the Muangthong Stadium in Bangkok on Saturday.

Muhammad Syazwan struck an unlikely goal on 34 minutes to take the pressure off the Malaysians against an aggressive Thai side that threatening each time they were on the ball. Syazwan’s goal came out of the blue that caught Thai goalkeeper Chakhon Philakhlang napping by the long range attempt that was both a cross-cum-shot that foxed him.

It was deceptive shot that made all the difference on a cold night as the vociferous home fans were left disappointed.. The ball ball sailed into the far corner which even left Syazwan himself surprised.

The victory was a sweet start to Malaysia’s campaign as they bid to get a place in next year’s Under-17 World Cup Finals in Chile. The top four teams in Bangkok will qualify for the Finals.

Malaysia coach S. Balachandran, a former international, kept looking at his watch as the Thais came in droves and could have score if not goalkeeper Muhammad Haziq’s heroics and the well marshalled Malaysian backline.

“The experience of playing under pressure gave us the edge against the Thais,” said Balachandran, who believes that the morale boosting win over the Thais has added the confidence to face South Korea tomorrow. The Koreans outplayed Oman in their opening match.

For Thailand coach Adul Rungruang it was just the opposite. “Pressure caused my players to make mistakes. I don’t blame the goalkeeper for the deceptive shot…the others should have cut out the attempt,” said Abdul, adding that they need to beat Oman in the next match to get back into the picture.

In Group B, Australia thumped China 3-0 while Japan defeated Hong Kong 2-0 at the Rajamangala Stadium.