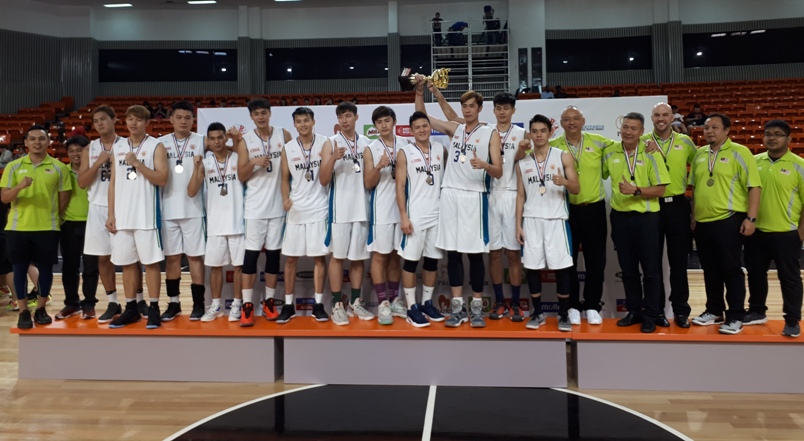 Share
Facebook
Twitter
WhatsApp
Email
Print
The Malaysian men’s basketball team came in second in the Maba International Basketball Invitation after losing narrowly 63-59 to Australian club side ACBA Dragons in the final that was played at the Maba Stadium in Kuala Lumpur.
The Malaysian lads started nervously at the start when they trailed by five points (1-6) just four minutes into the game.
With two minutes left of the first quarter, the visitors were overtaken (7-6) and the Malaysians got the engine running to lead 14-10.
Just a minute into the second quarter, the Malaysians extended their lead to an eight point margin (18-10). But the club side stood their ground to stop the rot and overturned the deficit to a four point cushion (25-29) at the midway point.
Overpowered by the superior physique of the Aussies, the Malaysian defence turned porous. But the Malaysians made sure their shots count when it mattered and catapulted their way back into the lead 51-44 in the third quarter.
With two minutes remaining in the final quarter, the visitors threatened to make a come back when they reduced the deficit to two (59-57). It was then even at 59-all with a minute on the clock.
Darnell Brown II remained calm to net four successive free throws to give the Aussies the win. The match ended 59-63 making ACBA Dragons champions on the tournament.
“The good thing is that we got to try different tactics to our gameplan against all of our opponents and we were also able to gauge where our team stands.
“We will rectify the problem after viewing the video and improve on our weaknesses. I think we may have showed our hands too much and that allowed ACBA to counter us.
“We’re still not at the level we want to be but I’m happy with the support I am getting from the team,” said coach Goh Cheng Huat.
Darnell was the top scorer with 28 points for Australia. While Soo Eng Heng had 13 points for Malaysia.
While third place went to Taiwan’s Normal University after they defeated their counterparts Chung Chou University 92-79 earlier today.
According to coach Goh, the national team is expected to leave for training in New Zealand from 18-29 July.
ROLL OF HONOURS
Maba International Invitation 2017
Women
1st place – Malaysia
2nd place – China Shanghai
3rd place – Scotland
Men
1st place – Australia’s ACBA Dragons
2nd place – Malaysia
3rd place – National Taiwan Normal University