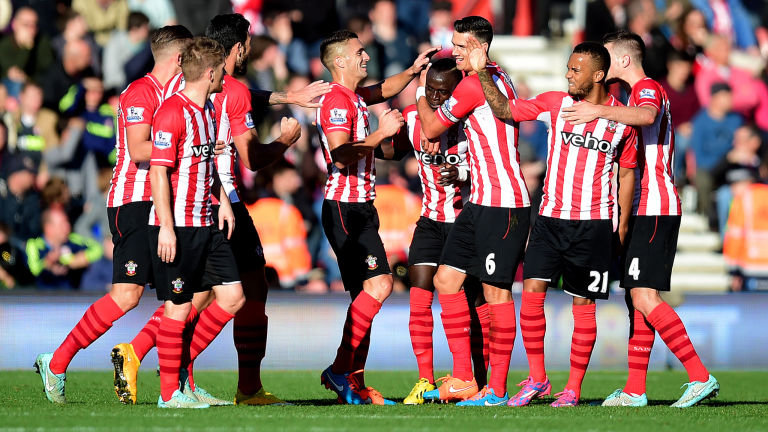 Southampton climbed to fifth in the Premier League after Sadio Mane’s late strike clinched a 1-0 win against Crystal Palace on Tuesday.

Senegal winger Mane netted with seven minutes remaining at St Mary’s to move Ronald Koeman’s side above Liverpool and to within one point of fourth placed Manchester United, who play their game in hand against Newcastle on Wednesday.

With the race to qualify for the Champions Leaguehotting up, this was an essential victory for Saints, who had gone three games without a win or a goal.

Eljero Elia had the first sight of goal for Southampton, but he couldn’t keep his shot on target.

Koeman’s team should have been ahead soon after as Victor Wanyama miscued a 25-yard shot into the path of the unmarked Filip Djuricic.

With just Julian Speroni to beat from inside the penalty area, the Serbian midfielder snatched at the chance and it flew high over the crossbar.

Palace had already won at St Mary’s in the FA Cup in January and they came close to taking the lead when Saints goalkeeper Fraser Forster dropped a Yannick Bolasie cross.

Wilfried Zaha should have taken advantage, but he hesitated and Forster recovered to scoop the ball clear.

Speroni showed Forster how to do it as the Palace goalkeeper made a fine stop to keep out Elia’s low shot.

Palace’s first shot on target came early in the second half when Bolasie crossed to Jason Puncheon, who fired in a shot that Forster punched away.

Bolasie should have opened the scoring when he burst through and shot tamely straight at Forster.

Those misses eventually came back to haunt Palace.

Saints pressed for the winner and Japan’s Maya Yoshida reached a corner at the far post, only to drag his effort just wide.

The deadlock was finally broken in the 83rd minute when substitute James Ward-Prowse drove in a low cross that Speroni could only push towards Mane, who clipped a cool chip back over the keeper and into the net. – Agence France-Presse