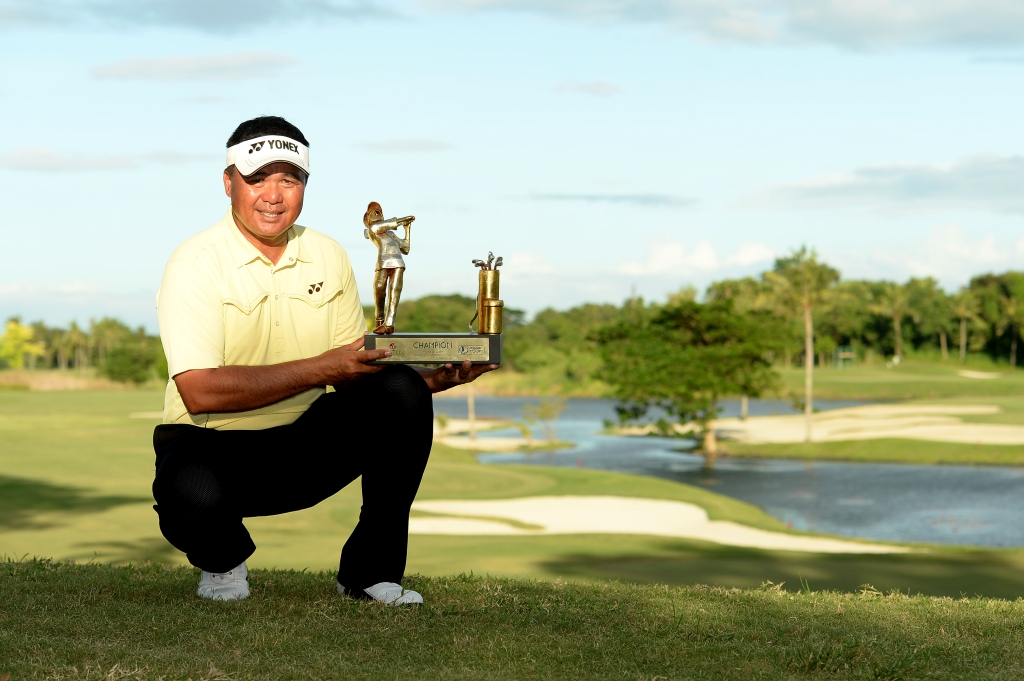 Overnight leader Mardan Mamat of Singapore ended a two-year title drought by romping to a commanding six-shot victory at the US$1 million Resorts World Manila Masters presented by 918.com on Sunday.

The 47-year-old veteran completed a stylish wire-to wire victory with a final round of three-under-par 69 at the Manila Southwoods Golf and Country Club. His winning total of 20-under-par 268 sealed his fourth Asian Tour success and second in the Philippines.

Frenchman Lionel Weber closed with 70 to finish runner-up for his best result of the season while last year’s runner-up Prom Meesawat of Thailand fired a fine 68 for third place, some eight shots behind the champion in what is the richest tournament in the Philippines.

Reigning Asian Tour number one Kiradech Aphibarnrat of Thailand, who played alongside Mardan, failed to launch a charge as a disappointing 75 saw him settle for fourth place with Australian Sam Brazel, Chinese Taipei’s Hung Chien-yao and American Paul Peterson.

Entering the week in 74th place on the Order of Merit, Mardan, who earned US$180,000, was in total control as he extended his overnight four-shot lead to six by turning in 34 with two birdies. He dropped a couple of bogeys coming home but three more birdies on the card ensured a victorious walk up the 18th fairway.

“It means a lot to me,” said Mardan, who fell on his knees kissing the ground after tapping in for par at the last hole for what was his career third start-to-finish victory.

“This is my last year of exemption (after winning the 2012 Philippine Open) and I needed to play well to keep my card. I wanted to win again to keep my exemption for the next few years. When I was on the range, the wind was pretty strong and I knew the scores won’t be low.

“I couldn’t control anyone, only myself and I focused on my own game. Playing with Kiradech, who hits it long, I knew I needed to keep to my own pace, keep to my own strength and it worked out.”

Despite holding a big lead down the stretch, Mardan conceded he only felt confident of hoisting the Resorts World Manila Masters trophy after striking his second shot on the closing hole. “Anything can still happen. I didn’t want to make any stupid mistakes and I just kept the ball in play. I didn’t feel comfortable until after I hit my second shot on 18. Only then did I feel comfortable about winning this tournament.”

The 24-year-old Weber, playing in his second season on the Asian Tour, savoured his runner-up finish where a cheque of US$110,000 was more than enough to seal his card for 2015. “There was a lot of tension and I tried to stay in the present,” said Weber, whose card included five birdies, one bogey and one double bogey.

“I’m happy I have secured my card. It’s a great feeling. I did think I had a chance to catch Mardan when I birdied the first hole but I made some really silly mistakes on the second (for double). Mardan is a very good player and he deserves it.”

After being beaten in a play-off last year, burly Prom was delighted to finish third after shooting 13-under over the weekend rounds as he moved to within US$5,000 shy of second-ranked Anirban Lahiri of India in the Order of Merit race.

“I didn’t have a good draw for the first two days and played in the wind on both days which made it a different course,” said Prom, who barely made the halfway cut with opening rounds of 73 and 72 before setting a new course record of 63 on Saturday.

“When I walked out of the clubhouse and I saw the wind, I knew it was very difficult to catch Mardan. It’s still a good week for me,” said the 30-year-old Prom, who has now earned a career high US$516,512 this year.

Big-hitting Kiradech was disappointed he did not apply more pressure on Mardan. After opening with a birdie, he dropped a bogey on two and a double bogey on four subsequently saw him battling for survival.

“It didn’t go as I planned. I was just trying to attack the pin and play more aggressively so I can catch Mardan. The double on four was a big turning point and I couldn’t get my mind back,” said the 25-year-old.

Scores after round 4 of the Resorts World Manila Masters being played at the par 72, 7,337 Yards Manila Southwoods GcC course (a- denotes amateur):