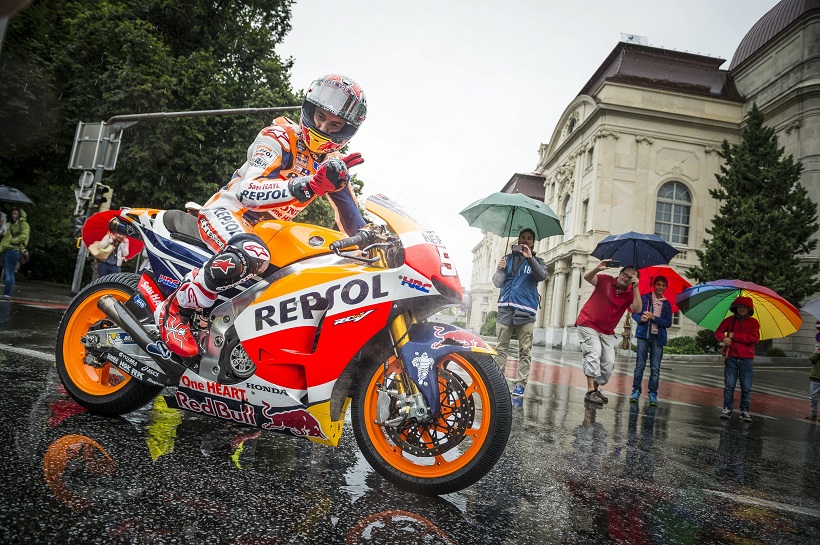 Two-time MotoGP world champion Marc Marquez led riders through the streets of Graz on Wednesday, officially launching the NeroGiardini Moto Grand Prix von Österreich to take place in Spielberg on September 12-14. This is the race’s first visit to Austria in 19 years.

The youngest ever MotoGP winner, Marquez from Spain and his German rival Stefan Bradl took a short tour around the landmarks of central Graz, dressed in their full kit and revving their engines along with Moto2 drivers Jonas Folger and Sandro Cortese from Germany and Moto3 riders Brad Binder (SAF) and Bo Bendsneyder (NED).

The fans came out in numbers despite the pouring rain to catch a glimpse of the riders and their racing bikes before they leave the host region’s capital for the Red Bull Ring where the event will take place.

Quotes from the MotoGP Graz Parade:??Marc Marquez: “I used the summer break to relax, going on holiday with friends. It was important, of course, to analyze the first half of the season and prepare well for the second half. I am really looking forward to the weekend. There are a lot of fans here, and I have seen a few with Marquez t-shirts on, which motivates me, of course. The Austrian countryside is wonderful. Of course I love Wiener schnitzel, and if I winon Sunday, there is going to be schnitzel at the team dinner!”

Stefan Bradl: “My father won the Austrian Grand Prix at the Salzburgring. He also raced at Spielberg, but a few things have changed since then. He is coming to the Red Bull Ring for the first time to watch the whole thing. The dialect here is very similar to what I am used to back in Bavaria, which makes it something of a second home race for me. I definitely feel really happy in Austria. The atmosphere is going to be super, it will all be going on and we can look forward to a great race.”

Sandro Cortese: “On paper, the Red Bull Ring looks easy, but when you go out on it for the first time, you soon see that the course has its own challenges. It’s extremely quick, which makes it difficult to push it that last extra bit you need. You really need a lot of experience here. A driver can quickly do very well here, but can also quickly lose out here. You definitely can’t overdo things, especially in the first sector, when it comes to braking and accelerating.”

Andy Meklau, Red Bull Ring’s race director: “I took a good look at the circuit today. Everything has been wonderfully spruced up. The weather is also going to be a factor at the weekend. We can definitely look forward to a unique atmosphere. For me personally, I am about to fulfill a dream. I have been fortunate enough to celebrate victories here as a driver, and I now have the privilege to work as a race director!”

Gustl Auinger, founder of the Red Bull Rookies Cup: “Every spectator can sense the fascination of MotoGP straight away. It is something very special to push a motorbike to its limit. You can see the rear wheel spring up when braking, you can see the knees and elbows rubbing the tarmac on turns, you can see the bikes going berserk down from the peak and front wheels rising. I am convinced, as we all are – that this is a sport of heroes, and they are going to be welcomed with open arms! We all can’t wait for it to finally get going. I am sure I can afford to make a guarantee that it won’t be boring for a single minute.”