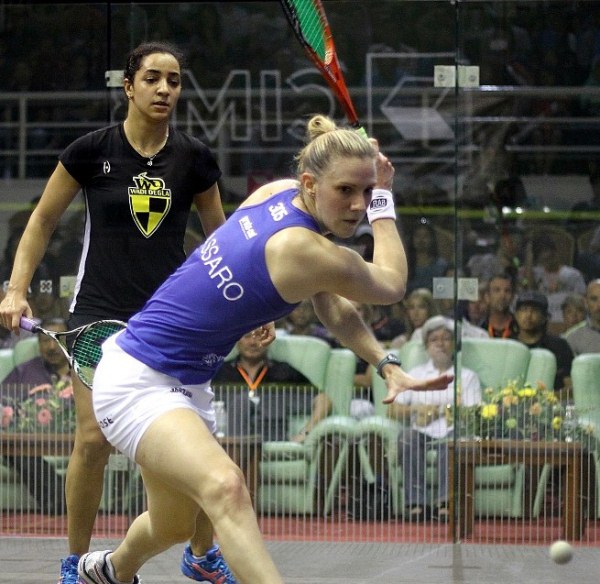 Massaro, 30, made an electric start to the first game, using every speck of the court to her advantage to gain the upper hand at 11-7.

But Sherbini, who had produced the shock of the championship by claiming the scalp of top seed Datuk Nicol David, was no pushover and her excellent front-court play brought her level after the second game at 1-1.

The third game saw both players trade points until 9-9, but Massaro held her nerve to win and take the lead for the second time.

The pendulum swung in Sherbini’s favour in the fourth game, the 18-year-old racking up seven consecutive points to win 11-5 and tie the scores at 2-2.

The deciding fifth game was as close as it got, but Massaro again showed nerves of steel to win 11-9 and claim the game’s biggest prize.

Massaro, who banished the memory of her loss in the 2012 World Open final, attributed her victory to her never-say-die attitude, especially in the face of adversity.

“It was an emotional battle for me today. I felt really nervous, but I feel this whole tournament has been based around being mentally strong and being gritty when it counts, and that’s what I’m most proud of,” she said.

Massaro described herself as “quite hard to beat”, adding: “People actually have to beat me, they are never given the game.”

Massaro, the first Englishwoman to win a world championship since Cassie Campion in 1999, was also relishing the prospect of a hero’s welcome back home.

The new world champion also paid tribute to her young opponent, who had pushed her all the way in the final.

“She (Sherbini) is the future of the game. I’m glad I managed to get a win while I still could.”