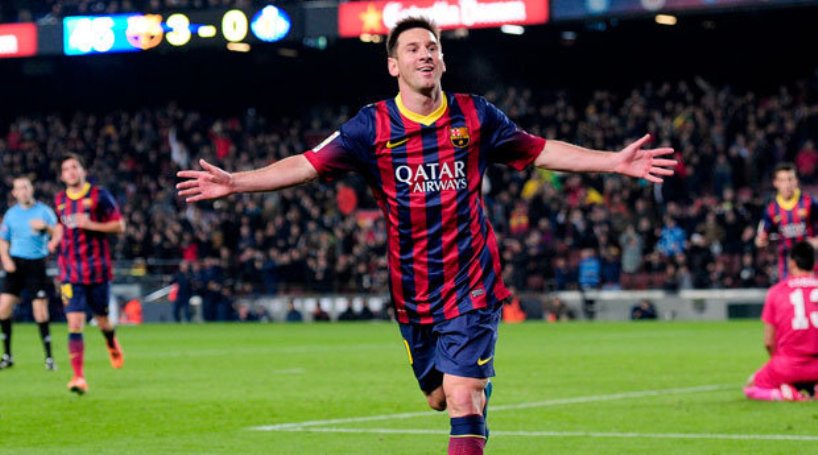 Lionel Messi marked his 300th La Liga appearance with his 31st Barcelona hat-trick as the Catalans moved within a point of Real Madrid at the top of the table with a 5-0 win over Levante.

However, champions Atletico Madrid remain seven points off the top in third after losing 2-0 at Celta Vigo.

Barca have now won 11 straight matches in all competitions and never looked in danger despite coach Luis Enrique making eight changes from the side that beat Villarreal in the Copa del Rey in midweek.

Messi teed up Neymar to open the scoring early on and then took over scoring duties himself to push out his all-time La Liga tally to 269 goals.

Yet, even the Argentine was upstaged by a stunning overhead kick from substitute Luis Suarez to round off the scoring.

Victory tied Pep Guardiola’s best ever run of consecutive wins during his hugely successful four-year spell in charge at the Camp Nou.

But Enrique insisted it is winning at the season’s end which matters most.

“Records are obviously positive, but they don’t interest me,” he said.

“The players aren’t overly euphoric because they know how hard it is to win titles.

“If the fans are euphoric then great. We need to be optimistic, but it isn’t important how many games we have won. What counts is if they help us to win trophies.”

Those changes did understandably provoke a subdued start, but Barca’s luck was in on 17 minutes when Neymar mishit Messi’s dinked pass over the Levante defence only for the ball to spin high into the air and drop into the far corner of the net.

Messi didn’t need the same fortune to make it 2-0 as Marc Bartra robbed the ball deep inside the Levante half and fed his teammate to slot home his 35th goal of the season.

The four-time World Player of the Year doubled his tally just before the hour mark as Sergio Busquets’s lovely pass into Pedro was turned across goal by the Spanish international for Messi to tap home.

Neymar was then upended inside the area by Ivan Lopez and, having handed penalty taking duties to the Brazilian when Neymar missed from the spot in midweek, Messi wasn’t going to give up the opportunity for his fifth hat-trick of the season as he sent Marino the wrong way.

Suarez was introduced at Neymar’s expense shortly afterwards and the former Liverpool man provided his own moment of brilliance 17 minutes from time as he caught Adriano’s cross flush on the volley for just his fourth La Liga goal.

Atletico were a shadow of the side that thrashed Real Madrid 4-0 last weekend as a fifth league defeat of the season all but ended their title hopes.

Celta dominated the opening 45 minutes without creating a clear-cut opportunity, but they were handed the chance to open the scoring in controversial circumstances from the penalty spot as the referee missed a handball by Augusto Fernandez in the build-up before Nolito was upended by Mario Suarez inside the area.

Nolito stepped up to send Miguel Angel Moya the wrong way from the spot and could only look on in disbelief moments later when Joaquin Larrivey somehow failed to turn his cross into an open goal.

Atletico were caught on the break 19 minutes from time when Michael Krohn-Dehli fed Fabian Orellana to drill the ball into the far corner.

“In the first-half I chose a bad formation. I lost 45 minutes in trying to balance the team to be better positioned,” said Atletico boss Diego Simeone, who had started Antoine Griezmann, Mario Mandzukic and Fernando Torres together in attack for the first time.

“The team started the second-half better, but then came the episode with the penalty.

Valencia needed an Alvaro Negredo penalty 19 minutes from time to see off Getafe 1-0 and move back above Sevilla into fourth.

Villarreal’s chances of a top four finish were dented, however, as they were undone by second-half goals by Alberto Bueno and Gael Kakuta in a 2-0 defeat at Rayo Vallecano. – Agence France-Presse