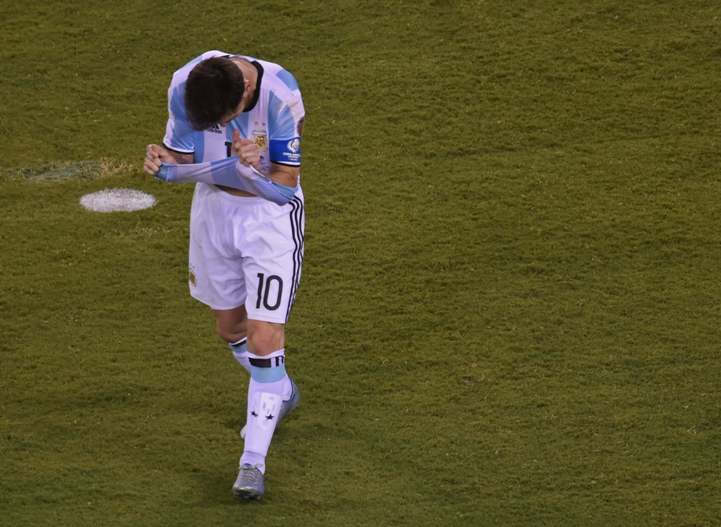 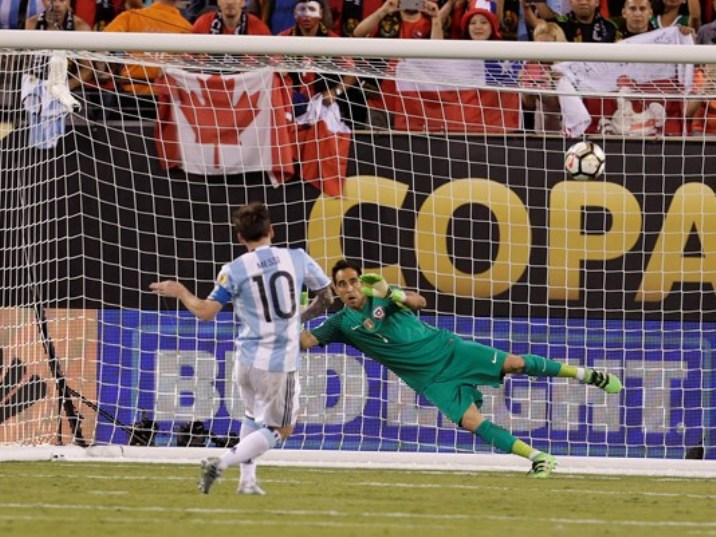 Lionel Messi sensationally announced his retirement from international football here Sunday after Argentina crashed to an upset defeat against Chile in the final of the Copa America.

The heartbroken Barcelona superstar was distraught after missing a spot-kick as Chile snatched victory in a penalty shoot-out — Messi’s fourth straight defeat in a major final while representing Argentina.

“For me the national team is over,” the crestfallen 29-year-old told reporters.

“I’ve done all I can, I’ve been in four finals and it hurts not to be a champion.

“It’s a hard moment for me and the team, and it’s difficult to say, but it’s over with the Argentina team.”

Messi also tasted defeat with Argentina in the final of the 2007 Copa America.

Despite a glittering career that has seen him be named FIFA World Player of the Year on no fewer than five occasions, Messi has faced persistent sniping from critics in Argentina.

Yet he received support on Sunday from Chile’s victorious Argentine coach Juan Antonio Pizzi, who maintained that Messi deserves to be regarded as the best ever.

“As well as an admiration for Messi, I’m driven very much by his numbers,” Pizzi said of Messi’s record-breaking career.

“I know what it means to value certain numbers and Messi’s numbers are unmatched, and I don’t think they will ever be matched because it’s impossible for a player to find the things that Messi finds.”

But while universally regarded as one of the greatest footballers ever, he has regularly been targeted for his inability to land a major title in the colors of Argentina.

Messi’s failure to match the achievements of Diego Maradona, who single-handedly carried the team to victory in the 1986 World Cup, has often been held against him.

“My generation can’t compare him with Maradona, because of what Maradona did for Argentine soccer,” Pizzi said. “But it seems that the best player in history played in the United States. For me the numbers are impossible to argue with.”

Maradona himself has often taken potshots at Messi, criticizing him on the eve of the tournament for a perceived “lack of personality.”

“He’s a really good person, but he has no personality,” Maradona said in Paris shortly before the start of Euro 2016.

“He lacks the character to be a leader.”

Messi’s bombshell decision comes after a gruelling season which was disrupted by injury last year.

He recovered to help Barcelona win the Spanish title once more and was relishing the prospect of leading Argentina to glory in the Copa America Centenario.

His commitment to playing for Argentina was reflected in his decision to fly from Spain to Argentina for a low-key friendly against Honduras shortly before the tournament, where he suffered a back injury.

He then returned to Spain to give evidence at his trial for tax fraud before jetting off to the United States to join up with his Argentina team-mates.

Although he was injured for his team’s opening group game against Chile, he came on as a substitute in a 5-0 hammering of Panama to score a hat-trick in 19 minutes.

He then equalled Argentina’s international goalscoring record of 54, held by Gabriel Batistuta, in the quarter-finals before setting a new mark with his 55th international goal in the semi-final win over the United States. – Agence France-Presse