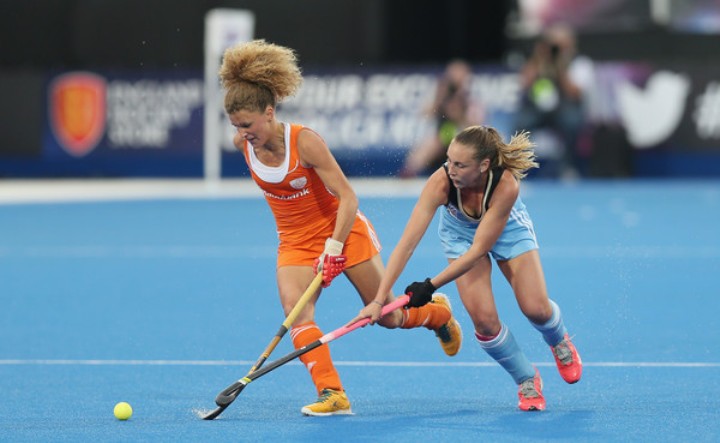 Argentina have claimed a record seventh Champions Trophy title thanks to a 2-1 win over reigning World and Olympic champions The Netherlands in the event final at the Lee Valley Hockey and Tennis Centre in London.
First quarter goals from Martina Cavallero and Noel Barrionuevo gave Las Leonas a 2-0 lead to stun the top-ranked Dutch, who were missing team captain and talisman Maartje Paumen through injury. The Netherlands hit back with a high quality penalty corner flick from Eva de Goede just after half time, but Argentina held on to win their third successive Champions Trophy title.
“We didn’t play our best yesterday but we were playing for nothing and it is always different for us in a final”, said Argentina captain Carla Rebecchi, who as well as finishing the competition as top scorer with seven goals was also named as the competition’s best player. “Today was very different to yesterday, there is something inside us that make us play better in finals. We know that when we get on the pitch in the final we have a little bit more than in other matches. We have to celebrate this victory.”
On winning her awards, Rebecchi said: “I’m really happy. But first of all, winning the tournament was great. I’ve been training really hard this year. I came back from my knee injury last year and in the summer I said I had to train really hard. I want to be very fit for the Olympics and I am doing that.”
As well as Rebecchi’s individual awards double, Netherlands’ shot-stopper Joyce Sombroek was named as best goalkeeper while Rebecchi’s 21-year-old team-mate Maria Granatto was named as the best junior player.
In the bronze medal game, USA battled to a shootout victory over Australia, giving the team a first Champions Trophy medal since wining bronze at the 1995 event in Mar del Plata, Argentina. The Americans (FIH Hero World Ranking: 7) bounced back from 2-0 down to level at 2-2 thanks to a double from Katie Bam before USA keeper Jackie Briggs kept a clean sheet against the Hockeyroos (FIH Hero World Ranking: 3) to seal a famous victory.
Remarkably, USA team captain Melissa Gonzalez scored the only shootout of the contest, with Briggs proving herself unbeatable in the American goal to give her team a brilliant bronze medal ahead of their Olympic challenge in Rio later this year.
We are so excited”, said an understandably delighted Jackie Briggs after the match. “It didn’t matter who we played, we just so happy with the result. We worked really hard to keep it at 2-2. I made a few mistakes in the game, but I was just really thankful that the team had my back today and I knew that going into the shootout I just had to keep it out.”
Earlier in the day, Great Britain ended on a high with their finest performance of the competition as Alex Danson scored a brilliant hat-trick as the hosts delighted the home fans with a 4-3 victory over New Zealand to secure a 5th place finish.
“We are obviously delighted as it has been a tough week for us so we are pleased to finish with such a solid performance”, said hat-trick hero Alex Danson after the match. “It’s always nice to be on the score-sheet, however it was three really well-worked team goals. The second goal was a really really well worked penalty corner, something that we have worked tirelessly on and it is always really special when those go in. There is no better feeling than a team goal.”
Referring to the constant support from the stands, GB goalkeeper Maddie Hinch said: “A huge amount of thanks to them. They make a huge difference when roaring every time the girls get on the ball, big save or a goal. It gets the buzz going in the team and we’ve missed a bit of that this week. It’s been a little bit flat from our end which comes from the back of results so they have really helped us turn it around.”
For more information and statistics about these games, plus additional quotes from the athletes, visit the official event webpage on FIH.ch.
Final standings – Hero Hockey Champions Trophy 2016
1: Argentina
2: The Netherlands
3: USA
4: Australia
5: Great Britain
6: New Zealand
Individual Awards
Best player: Carla Rebecchi (ARG)
Best junior player: Maria Granatto (ARG)
Best goalkeeper: Joyce Sombroek (NED)
Top scorer: Carla Rebecchi (ARG)