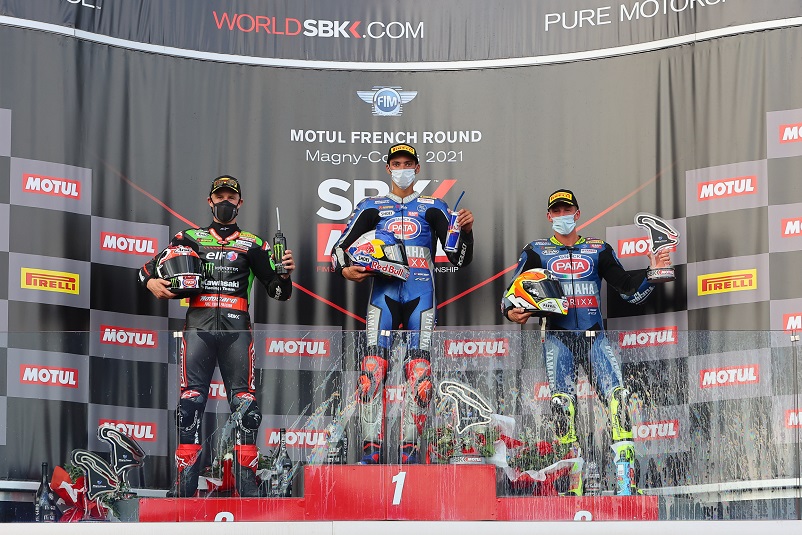 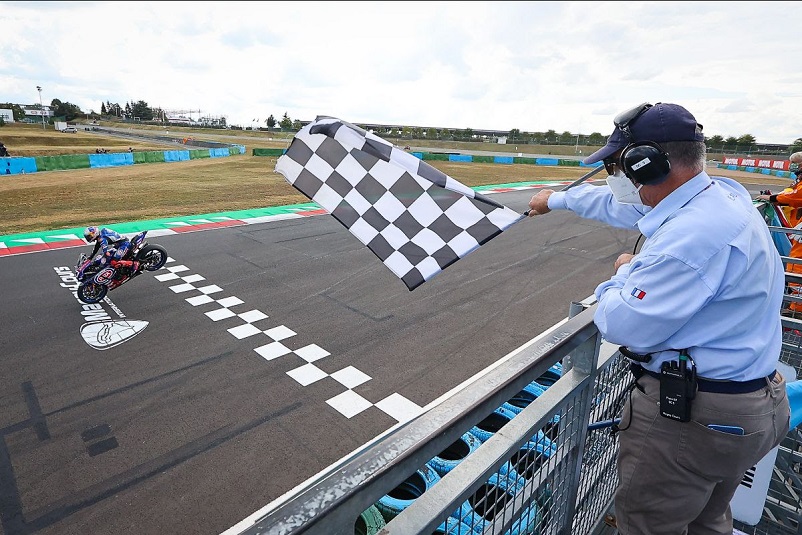 Dramatic racing, incredible battles and more featured throughout Race 1 at the French Round

The first race of the MOTUL FIM Superbike World Championship at the Circuit de Nevers Magny-Cours delivered action throughout the 21-lap encounter with Toprak Razgatlioglu (Pata Yamaha with Brixx WorldSBK) taking victory with an incredible performance of pace and consistency to win by more than four seconds as he gained a five-point swing over nearest rival Jonathan Rea (Kawasaki Racing Team WorldSBK) at the Motul French Round, while title rival Scott Redding (Aruba.it Racing – Ducati) endured a difficult Saturday in France as he finished 12th in Race 1.

Razgatlioglu got a good start and took the lead through Turn 1 but soon found himself shuffled back thanks to the run down to the Turn 5 hairpin of Adelaide. He responded when Rea took the lead and made a move on Lap 4 at Adelaide to reclaim the lead of the race before he was able to pull out enough of a gap to keep Rea at arm’s length.

Rea was able to respond as the laps progressed, closing the gap to just a couple of tenths but could not make a move stick before Razgatlioglu extended his lead out in front to more than a second ahead of Rea, holding on to secure his second victory in a row following on from his win in Race 2 at Navarra.

Rea’s second place extends his winless drought to seven races since he won at Assen in Race 2. Razgatlioglu showed remarkable consistent pace throughout the 21-lap encounter, always lapping in the 1’37s bracket and he also becomes the first Yamaha rider to take 18 podiums in a single season.

Andrea Locatelli (Pata Yamaha with Brixx WorldSBK) claimed his third podium in WorldSBK with third place after he got a good start to the race to move up the field from fifth place, before battling the even faster-starting Michael Ruben Rinaldi (Aruba.it Racing – Ducati) for fourth place; eventually passing the Italian at Turn 5 on Lap 12.

He then gained a position on Lap 17 when Alex Lowes (Kawasaki Racing Team WorldSBK) crashed at Turn 8 on Lap 17, forcing the British rider out of the race. It meant Locatelli was able to claim third place with Rinaldi being promoted to fourth. – www.worldsbk.com

P1 Toprak Razgatlioglu (Pata Yamaha with Brixx WorldSBK)
“Yesterday we worked a lot because I need a consistent lap time. In this race, I was riding relaxed because I knew I was fast, so I was trying for consistent lap times. I’m really happy to win again. Thanks to my team because they did an incredible job this weekend and also tomorrow, we will try again. At the finish, I did a stoppie. This is my dream this year. I waited until this track and I needed more of a gap.”

P2 Jonathan Rea (Kawasaki Racing Team WorldSBK)
“I could be there. He had a really good rhythm out in front. It was obviously much easier to follow; I could use him as a gauge. When I was getting closer, I was having some issues. In the back of my head, it was today’s just not my day. The team worked hard, and the bike felt good, just not good enough to fight with Toprak. He did an incredible job so congratulations to him and his team. It gives us some work for us to do for tomorrow but I’m sure we can find a way to try to bridge the gap a little bit and try to have more of a fight tomorrow.”

P3 Andrea Locatelli (Pata Yamaha with Brixx WorldSBK)
“I’m really happy and we enjoy the moment because we are very fast, and we did a really good job. Unfortunately, in the first part of the race, I’m not really fast and lose a little bit of time with the front but in the end we got another podium and this is the way, it’s fantastic. My Yamaha family are very nice, it’s a big group and we will continue in this way.”

Championship Standings (after Race 1, Round 8)