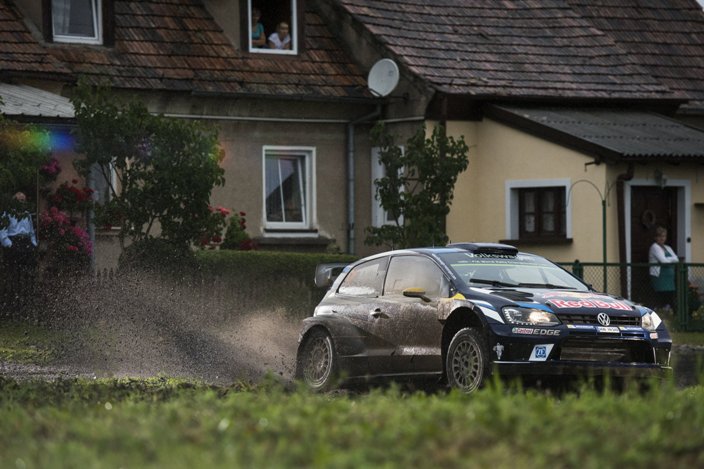 Tänak’s Ford Fiesta RS suffered a puncture in the penultimate rain-soaked speed test, wiping out his near-20sec lead and allowing Mikkelsen to claim a second career success. He became the sixth different winner in the last six rounds of a hugely unpredictable season.

“We pushed so hard all weekend and with the weather as it was today we knew it was going to be difficult and we gave it everything. It was like a war in the penultimate stage and it was all about luck, who got out without problems, and we were the lucky ones.

Mikkelsen commiserated with the Estonian, having been on the receiving end of a similar situation when he spun out of the lead in Sweden in 2015 in the final test.

“I told Ott before the final stage that I felt so sorry for him. It would have been an adventure story but that’s the way rallying is. It’s very unpredictable,” said Mikkelsen, who climbed to second in the points.

Tänak had excelled on the sandy but lightning fast roads since Friday afternoon and was inconsolable at the finish. “There’s nothing I can say. All this and then you get nothing, it’s too hard,” he said.

Hayden Paddon completed the podium in a Hyundai i20, 2.3sec behind Tänak, to end a run of accidents in the previous two rounds. However, the New Zealander almost relaxed too much in the final stage, allowing team-mate Thierry Neuville to close to within 0.8sec.

Jari-Matti Latvala finished fifth, a further 4.5sec back in a Volkswagen Polo R. Team-mate Sébastien Ogier was sixth, the championship leader admitting conditions were so bad that simply surviving the final day was his sole aim.

Craig Breen was seventh in a DS 3, moving up after team-mate Stéphane Lefebvre smashed his car’s rear left suspension after spinning into a tree. The Frenchman eventually finished ninth.

Mads Østberg overhauled both Lefebvre and team-mate Eric Camilli, who limped through the final stage with damaged suspension on his Fiesta RS after going off the road in the previous test. Camilli took 10th.

Dani Sordo retired after firstly slamming his i20 in chicane bales and then damaging his rear suspension against a tree.

Poland marked the midpoint of the 14-round campaign and the second half begins with Neste Rally Finland which is based in Jyväskylä on 28 – 31 July.