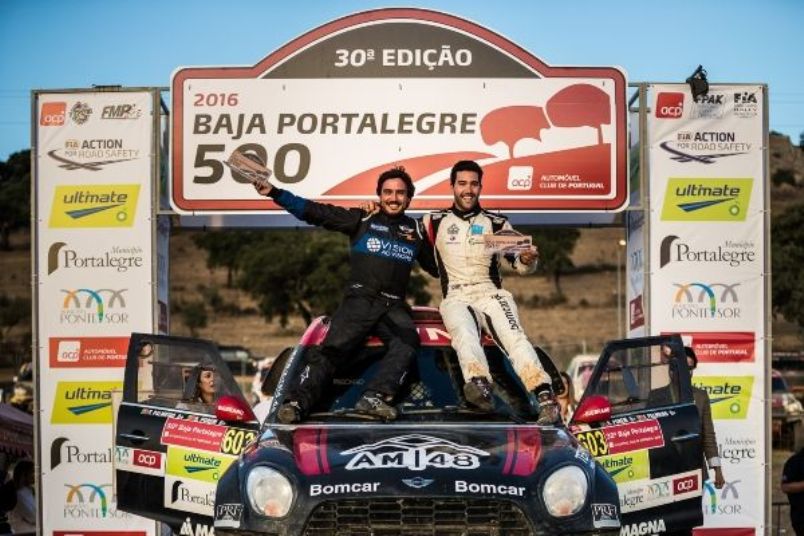 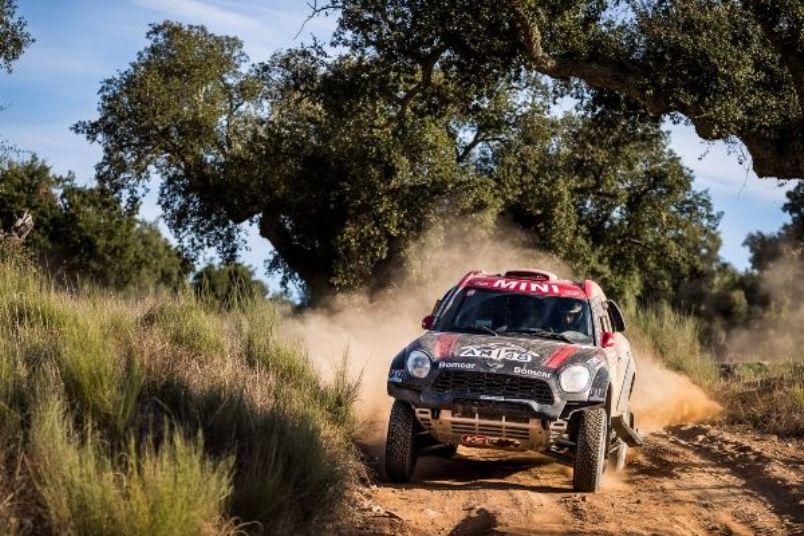 The 2016 FIA Cross Country World Cup ended with the final race, Baja Portalegre 500 (27-29/10/2016), taking place in Portugal. This race proved to be an exciting and fast paced world cup season ender that resulted with a MINI ALL4 Racing on the top step of the podium.

Ricardo Porém (POR)and co-driver Filipe Palmeiro (POR) showcased a positive and carefully planned race that not only resulted with a MINI win, but also ended with Porém in the record book for winning his third consecutive Baja Portalegre 500.

Talking after his race win, Porém said: “I’m absolutely speechless and happy to win third time in a row the Baja Portalegre. Everybody did a great job. I’m looking forward to have a big party with all of them.”

Filipe Palmeiro (POR) was equally jubilant with his first ever home win and was full of praise for the duo’s X-raid support team: “This was a great rally and I’m totally happy for my first victory in my hometown. We showed up with a super team and I have to thank all of them for the great job they did. Without you we would not have had the chance to win.”

Baja Portalegre 500 wasn’t just the last race of the FIA Cross Country World Cup. It also served as a perfect setting for motorsport partner X-raid to hold a team building exercise – part of the all-important preparations ahead of the 2017 Dakar Rally (2-14/01/2017).

For this last weekend of the world cup season, X-raid served up a Baja Portalegre 500 support team that saw many X-raid regulars in job reversal roles. Such examples were X-raid Team Manager Sven Quandt taking on the roles of physiotherapist and photographer. Michel Périn (FR) used his co-driver skills and varied rally history to assume the position of team manager. Driver Mikko Hirvonen (FIN) and two co-drivers, Pete Mortensen (USA) and Paulo Fiúza (POR) took the responsibility as mechanics for Porém and Palmeiro.

The 2016 cross-country rally season kicked off with the Dakar Rally in January. This year saw the toughest of all long distance rally races take in extreme terrain and difficult weather conditions. It also saw a MINI ALL4 Racing finish second after 14 days of racing action and first in the four-wheel drive ranking.

Four MINI ALL4 Racing finished Dakar inside the top ten, while ten of these iconic rally cars completed the whole event. Once again a remarkable achievement underpinned by X-raid staff.

At the start and throughout the nine round FIA Cross Country World Cup season, MINI and motorsport partner X-raid continued their development regime of the MINI ALL4 Racing. Such practice has unquestionably helped capture four previous World Cup titles and remains paramount at each and every race.

The Italian Baja saw a newcomer to the MINI ALL4 Racing family. American Bryce Menzies immediately took to the iconic MINI ALL4 Racing and completed the race in a remarkable fifth place with Tom Colsoul (BEL) by his side.

In July, Mikko Hirvonen (FIN) finished third at Baja Aragon. One month later he won his first ever race of the FIA Cross Country World Cup. His victory at the Hungarian Baja was icing on the cake for Hirvonen – in January, at his first ever attempt at Dakar, he completed in fourth place to become the highest placed rookie. Bryce Menzies carried on his good start with a MINI ALL4 racing with a well-deserved second.

July was also the first time the MINI ALL4 Racing family raced at an event entitled Silk Way Rally (non-FIA round). This marathon 15-day event encompassed 10,734 km driving from Russia to China, three countries and two continents and ended with all five MINI ALL4 Racing entries completing inside the top ten, four of which inside the top five. Yazeed Al Rajhi (KSA)  and co-driver Timo Gottschalk (GER) were the highest placed in second.

Baja Poland in August saw three MINI ALL4 Racing complete inside the top five. The other big news from this race was the second place result for Polish duo Krzysztof Holowczcyc (POL) / Lukasz Kurzeja (POL). They narrowly missed out on the win through bad luck but if they had won it would have been a remarkable result considering Holowczcyc had retired from racing the year before and only competed as a one-off event!

Olibya Rallye du Maroc saw yet another three MINI ALL4 Racing finish inside the top five. This result is particularly worthy of a mention because all the MINI All4 Racing cars and crews were there for testing and evaluation purposes only.

As 2016 draws to a close, MINI and the MINI ALL4 Racing family and motorsport partners X-raid are not sitting back relaxing. 2017 is fast approaching and with it the Dakar Rally and another world cup. Test and development of machines and men is ongoing …