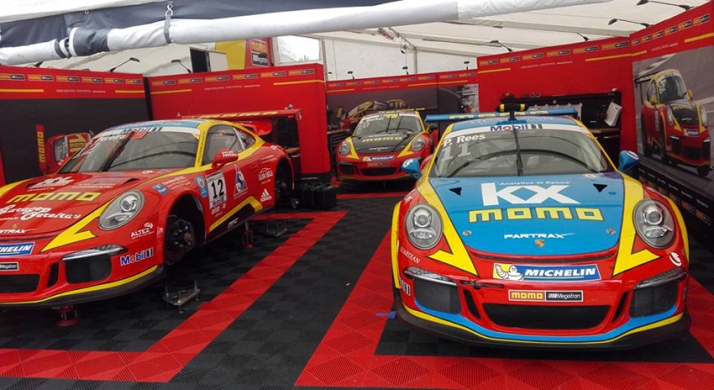 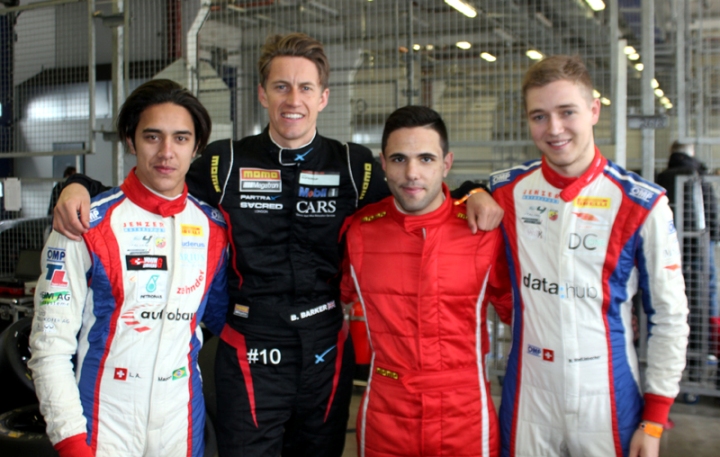 MOMO Megatron Team Partrax formally launches its 2016 campaign this weekend in Barcelona. For the fourth consecutive year, the team will be participating in the Mobil 1 Porsche Supercup Series. The prestigious one-make Championship begins its season this weekend as a support race for the Spanish F1 Grand Prix.

Barker is seen as one of the top drivers in Supercup this season. He started his career in karting and later competed quite successfully in single seater racing. The Suffolk born Brit and fixture of the Australian racing scene has been part of the Porsche Supercup family since 2013, and has already made it to the podium a couple of times. Serving double duty this year while running parallel in the WEC, the 25 year old is looking forward to his most successful season to date.

Paul Rees also counts on quite some experience in this prestigious Cup. The son of former British F1 driver Alan Ress began his career in single seater racing. Paul competed successfully in British Formula BMW, Formula Palmer Audi and Formula 2. He moved to Cup cars in 2014 where he ran a successful campaign in Carrera Cup Great Britain Championship.  He graduates now to Super Cup, after a successful run in last year’s US Grand Prix at Austin. Paul will prove to be a tough competitor with his sights squarely set on the podium he is so used to occupying in his earlier series.

Young 19 year old Dylan Pereira completes the MOMO Megatron Team Partrax Supercup line-up. Hailing from Luxembourg with Portuguese heritage, Dylan calls Ayrton Senna and Lewis Hamilton his big racing heroes. He was a starlet in Karts when he was 10 years old, having won different Championships in Luxemburg and also successfully competing in World and European Championships. Dylan moved to the VW Golf Cup, and also made his debut in Supercup at the US Grand Prix in 2015.  While one of the youngest competitors this season, Dylan’s rapid ascent in motorsports and recent successes has cause to label him as one of the most promising and up and coming drivers.

In addition to the Porsche Supercup campaign, the team is pleased to announce its expansion into the Sportscup where two Porsche GT4s will be fielded.

Nico competed for two years in Formula 4, after having contested a successful karting career. The 20-year-old now continues his racing career in the GT category: “I am really looking forward to working together with the MOMO Megatron Team Partrax. I was immediately greeted with a very warm welcome and was immediately integrated into the team. The careful balance of a serious work ethic together while maintaining a certain sense of humour has provided me with a very positive outlook for the future.” Nico acclimated to the new GT4 quite quickly in testing. “And my teammate Lucas is a good old friend. So the circumstances could rarely be any better. The only thing missing now is a good performance of us, the drivers – which of course we are looking forward to delivering. The first tests at Nürburgring were already quite promising, so I really can´t wait to see how the season develops.”

Lucas completes the Sports Cup lineup. Mauron was sent on his way into racing already by baptism.  The St. Gallen born driver achieved success early in karting by winning a Swiss Championship. In 2014, he moved to Formula 4 in 2014. Nearly 18 years old now, Lucas moves to GT racing. “I am really looking forward to an intense GT season, which will of course be a completely new challenge”, he says. “But for me it is also an honour to race for such an internationally high-rated team as Momo Megatron Partrax, where I have felt very welcomed at once. And for sure it´s nice having a teammate whom you know very well. So everything is ‘go’ now!”

“It is a privileged to be part of the Mobil 1 Porsche Supercup again and expanding into the Porsche Sportscup with the new Cayman GT4. We have well known partners in MOMO and Megatron, a “hungry” , talented  fantastic driver line up in Dylan, Paul and Ben,  with support of their partners , all pushing to bring all of us the the results in the Supercup we all want to see.Led by veteran Crew Chief Marco Fichter, the team has done a great  job to prepare the Season. Chris Crawford brings a wealth of experience to the engineering side to lead the the drivers to new heights.Both Lucas and Nico are leading the GT4 program in it’s first Year. We want to see them    launch ther GT careers with great success with us, and help them into the Porsche Supercup in the near future. Thank you to the team and everyone ‘s effort.

“We are honored to have such talented drivers represent the MOMO brand as we head into our 4th season of the Porsche Supercup. The new Porsche GT4 Sports Cup series will also prove to be a very exciting platform, serving as a strong development platform for our Supercup program”.

We are very proud to enter 2016 with such a strong driver line-up. Andreas has put together an extremely competitive program for both our Porsche Supercup and Sports Cup campaigns.  Building off of the success of our last three seasons, there is no doubt that we are well positioned to be a strong force in both Championships.