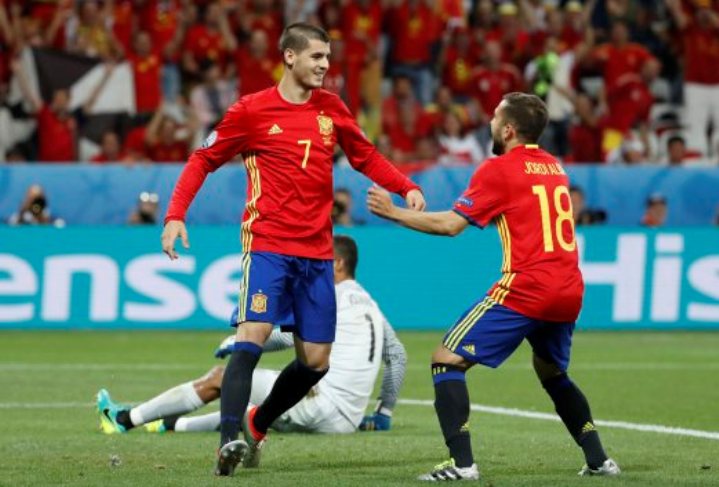 Alvaro Morata scored twice for defending champions Spain and Eder was Italy’s winner as the two booked places in the last 16 of Euro 2016 on another day marred by fan violence.

A 2-2 draw between Croatia and the Czech Republic was briefly halted after Croatians threw flares on the pitch, prompting coach Ante Cacic to call them “sports terrorists.”

UEFA announced their intention to investigate and Turkey could also face the wrath of European football’s governing body after fans lit flares and threw firecrackers onto the pitch at the end of their 3-0 defeat to Spain.

On the field, Spain toughened their case to become the first side to win three consecutive Euros. Vicente del Bosque’s men became the first country to hit three goals on the eighth day of competition in France.

However, it was once again Barcelona’s midfield maestro Andres Iniesta who claimed the man-of-the-match award.

“It depends on ourselves how far we go here, the feelings we have are very positive at the moment,” said Iniesta.

Spain can seal top spot in the pool with just a draw against Croatia in their final group game on Tuesday.

Turkey need to beat the Czech Republic in their final match and hope other results go their way to have any chance of progressing as one of the four best third-placed sides from the six groups.

The Czechs picked up their first point thanks to a remarkable late fightback amid chaotic scenes in Saint Etienne.

Croatia looked in cruise control as goals from Ivan Perisic and Ivan Rakitic in each half put them 2-0 up before Milan Skoda pulled a goal back 14 minutes from time.

English referee Mark Clattenberg stopped play for four minutes late in the game as flares rained down from the Croatian end.

A ground staff member at the Stade Geoffrey Guichard appeared to be hit by a flare and was seen running off to seek help.

Punches were also seen being thrown on the terraces amongst Croatian fans in the madness of the closing stages.

UEFA ordered Croatia to play two Euro qualifying matches behind closed doors, deducted a point and fined the federation 100,000 euros when a Nazi swastika symbol was drawn on a pitch before a Euro qualifier against Italy a year ago.

“I hope these people are identified and punished,” Cacic said.

“These people are really scary, that is why I call them hooligans. These are not fans, these are sportsterrorists.”

To add to Croatia’s worries, star midfielder Luka Modric came off with what Cacic called a “muscle” injury.

Italy booked their place in the knockout rounds in the relative calm of Toulouse as Brazilian-born striker Eder smashed home a stunning winner two minutes from time to seal a 1-0 win over Zlatan Ibrahimovic’s Sweden.

Despite an unconvincing display from Antonio Conte’s men, Eder provoked wild celebrations when he fired into the far corner from Simone Zaza’s knockdown to keep Italy’s perfect start going after an impressive opening 2-0 win over Belgium.

“No one would have expected us to be in this position after our first two games,” said Chelsea bound Conte.

After disappointing since his move to Inter Milan in January, Eder was delighted with his goal.

“I think it helped me I wasn’t playing for Inter Milan a lot at the end of the season. That helped me to save some energy for this championships and also allowed me to work a lot of my fitness.”

After a 1-1 draw against the Republic of Ireland on Monday, Sweden now face elimination if they fail to beat Belgium in their final group game. Ibrahimovic again missed out on the chance to become the first man to score in three European Championships.

“The first game we did nothing good and we still got a point. Today (Friday) we did a lot of good things and got zero points,” said Manchester United target Ibrahimovic. – Agence France-Presse