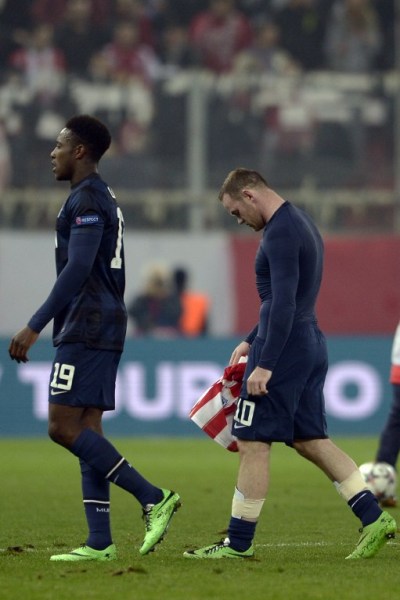 Manchester United were deservedly beaten by Olympiakos in the Champions League/AFP PIC.

MANCHESTER UNITED manager David Moyes admitted that he had been taken aback by the abject quality of his team’s performance in their shock 2-0 Champions League loss to Olympiakos.

The English champions must attempt to overturn a two-goal deficit in the home leg of the last 16 tie on March 19 after a limp display at the Karaiskakis Stadium in Piraeus in Tuesday’s first leg.

Olympiakos were good value for their victory, secured through goals in each half from Alejandro Dominguez and Joel Campbell, who is on loan at the club from Arsenal, but in United they came across surprisingly generous opponents.

Careless in defence and short of ideas in midfield, United failed to muster a single shot on target during the game and did not seriously threaten until Robin van Persie shot over the bar in the 82nd minute.

“We have a shot which gets deflected (for Dominguez’s goal), but we didn’t offer enough on the night to create a goal, really.”

Democratic in his criticism of his players, Moyes added: “We never really got to grips with things. To a man, you could hardly pick anybody out (who played well).

“We just didn’t perform well tonight (Tuesday). We came into the game in good form, with a good mindset, but it didn’t show tonight.”

The defeat, United’s first against a Greek team, was the latest sorry chapter in a season of misery for Moyes and his faltering side.

Knocked out of both domestic cup competitions, United trail Liverpool by 11 points in the battle for a top-four finish in the Premier League and face the stark prospect of missing out on a place in the Champions League for the first time since 1995.

They last overturned a two-goal deficit in a European tie in 1984, when they came from 2-0 down to beat Barcelona in the Cup Winners’ Cup, but Moyes believes the club can harness the mystique of their famous stadium to turn the tie around in the second leg.

“The players are hurting as well. They know how they performed,” he said.

“But there’s a team here, and we won’t change. We’ll stick together. There’s a second game to come and Old Trafford has seen some great nights in the past and I’m looking forward to hopefully seeing another one.”

Former United captain Roy Keane, working as a pundit for British television, opined that Moyes would have been “shocked” by the lack of quality in his squad, but the Scot dismissed that assessment.

“I think there’s undoubtedly talent at Manchester United, but tonight we didn’t show it,” he said.

“Me and the team, we didn’t show it together. It’s something we have to do and we’ll put it right. We’re determined to put it right, and we’ll have opportunities to do it in the coming weeks.”

Dominguez opened the scoring in the 38th minute, cleverly flicking Giannis Maniatis’s shot past United goalkeeper David de Gea, before Campbell curled in a fine effort from 25 yards after 10 minutes of the second half.

Olympiakos coach Michel, the former Real Madrid midfielder, described the result as the best of his managerial career, but he refused to disparage his opponents despite their wretched display.

“We’ve been preparing for a long time, but in silence,” he said.

“We know about the qualities of Manchester United and we know they’ll be far better in the second leg at Old Trafford.