Home International Newport Turns It On 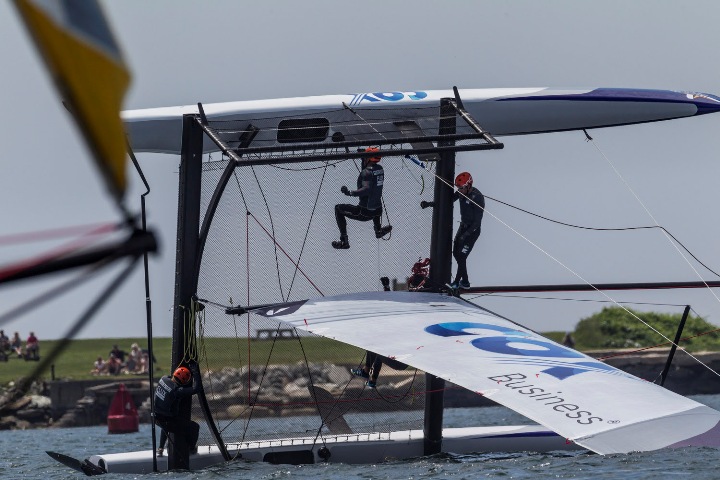 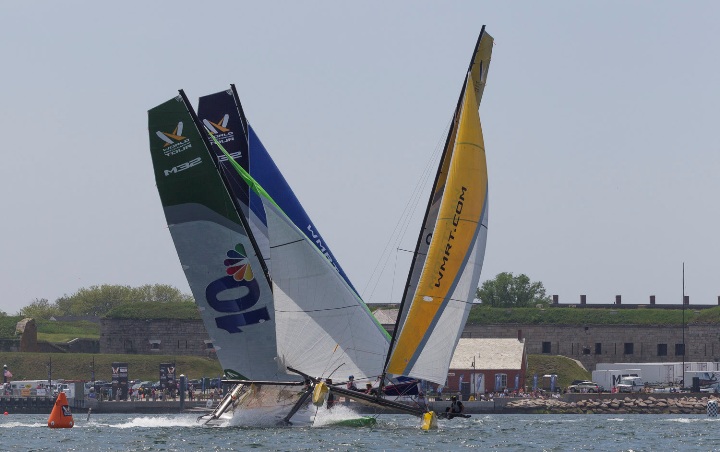 After yesterday’s torrential rain and pea soup fog that restricted visibility on the race course, today Mother Nature smiled upon Newport, Rhode Island. The early morning mist burned off, finally revealing Goat Island and downtown Newport (invisible all of yesterday) and the sun came out allowing a gusty sea breeze to build into the high teens.

Day two of the World Match Racing Tour Newport saw a continuation of the Qualifying fleet racing rounds, used to determine the seeding going into the Super 16 knock out match racing rounds. With the M32 teams divided into four groups of five for the Qualifying fleet racing, the aim for crews today was to get into the top three in their group, guaranteeing a Super 16 berth. The bottom two in each group will get to match race in the ‘Sail Offs’ first thing tomorrow morning, the winner of which will get one of the final Super 16 spots.

First on today were the continued races for Group 2. This developed into a heavyweight bout between young Scandinavians, Dane Nicolai Sehested and his Trefor Match Racing crew and Swede Nicklas Dackhammar and his ESSIQ Racing Team. A late charge from Sehested, posting a 2-1-1-2 today, caused him to end the day tied for the top with his Swedish opponent, to win on countback.

Sehested commented: “We are pretty happy winning the group, but, as we proved in Copenhagen (when we also won the group), anything can happen when it comes to the knock-out stages. We are happy and we sailed well, but we are just going to keep our heads down. It’s a good start, but means nothing yet.”

Compared to yesterday’s racing, today competition followed more conventional lines, such as actually being to see the weather mark and the course boundaries… “Today it was a bit more about doing your job right rather than waiting to get lucky. Yesterday was more about gambling, and we got lucky, but we prefer fair conditions.”

Group 4 saw New Zealander Phil Robertson and his WAKA Racing team displacing Yann Guichard’s Spindrift racing crew from the top spot. However grabbing the headlines in the latter races was Spanish double Olympic gold medallist and round the world sailor Iker Martinez. In the penultimate race he was awarded an impressive three penalties, while in the final race he managed to capsize his M32 catamaran.

“It was the first day of my sailing the M32 in these conditions – I have to learn about how to sail them. To start with, we couldn’t tack…,” explained Martinez whose only other visit to Newport was as skipper of MAPFRE in last year’s Volvo Ocean Race. “Plus the boundaries were very close to the marks and where I was steering from, it was difficult for me to see the marks…”

Finishing uncharacteristically at the bottom of his group, Martinez gets to compete in the Sail-Offs tomorrow against young Australian David Gilmour. Martinez is anticipating that he and his crew will perform in less wind, as they did in Copenhagen and will prefer the match racing format with less boats on the course.

The stand-out performer of Qualifying was Chris Steele whose average score of 1.71 will make him top seed in tomorrow’s Super 16 Knockout round. But again it was not the winner in this group that stole the limelight. Former World Match Racing Tour champion and WMRT Copenhagen winner, US Virgin Islander Taylor Canfield, claimed today’s first two races, but in the third and final race was black flagged when he failed to keep clear of Australia Keith Swinton’s Team Accure which was unable to avoid a capsize. However finishing third was enough to get Canfield a Super 16 berth.

Six-time match racing world champion, GAC Pindar skipper Ian Williams had a ‘black and white’ Qualifying, scoring a mix of 1s and 5s, but enough for him to come out on top in Group 3. Nipping at Williams’ heels was the all-American crew of Californian Michael Menninger, previously part of American Youth Sailing Force which competed in the Red Bull Youth America’s Cup in San Francisco three years ago. Menninger finished second in the group, just four points adrift of Williams, despite trawling the weather mark in the penultimate race.

“We are happy as a group to get into the next round,” said Menninger.  “We still have some work to do as a team. I have some experience sailing the Red Bull Youth America’s Cup so I’m used to fleet racing starts in catamarans, but it was a team effort.”

Tomorrow conditions are set to be rain-free and will be fractionally lighter. The regatta enters its match racing phase starting with the Sail-Offs before launching into the Super 16s.