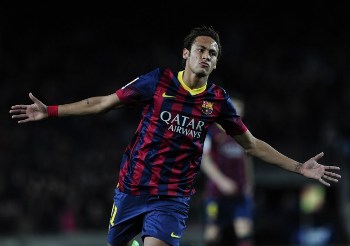 Barcelona boss Luis Enrique said he had to substitute two-goal star Neymar to prevent the Brazilian from being injured as his side’s Copa del Rey quarter-final, second leg with Atletico Madrid turned nasty.

The Catalans went through 4-2 on aggregate after coming from behind twice to win 3-2 on the night as Atletico were reduced to nine men and were lucky not to be more harshly punished when Arda Turan was only booked for throwing his boot at an assistant referee.

“The moment arrived when the game had got ugly and we took off Neymar so it didn’t get any more heated,” said Enrique.

“Players ought to be intelligent and know that they are fellow professionals.”

Neymar had already put Atletico’s hopes of reaching the last four to the sword well before he was replaced by Pedro Rodriguez 13 minutes from time.

The Brazilian levelled with his 20th goal of the season after Fernando Torres had brought Atletico level in the tie with a first minute opener.

Raul Garcia then briefly put Atletico back in front from the spot, but Miranda’s own goal made it 2-2 before Neymar pounced again on the counter-attack three minutes before the break.

Atletico captain Gabi was then sent-off at half-time and Mario Suarez was also dismissed as the Spanish champions completely lost their heads after the break.

“Neymar showed the attitude he always does. He is a player with a lot of confidence and helps us all in all phases of the game. Today he was outstanding,” added Enrique.

However, Atletico boss Diego Simeone defended his players despite referee Jesus Gil Manzano showing six yellow cards and two reds to his side during a tempestuous 90 minutes.

“I feel proud of my players. In the first-half they were extraordinary and showed an incredible fight.

“It was very difficult to attack because the ball was bobbling all the time. Barcelona played on the counter-attack, which is rare for them and they did it very well.”

Simeone also accepted the responsibility for his side’s showing after the break as he shut up shop in hope of avoiding a more demoralising scoreline.

“In the second-half due to my decision the team played as you saw, without taking any risks so that they didn’t score.

“I tried to do the best for my club and my players. We played the most convenient way for us. I am the coach and it is what I thought was the right thing to do.” – Agence France-Presse