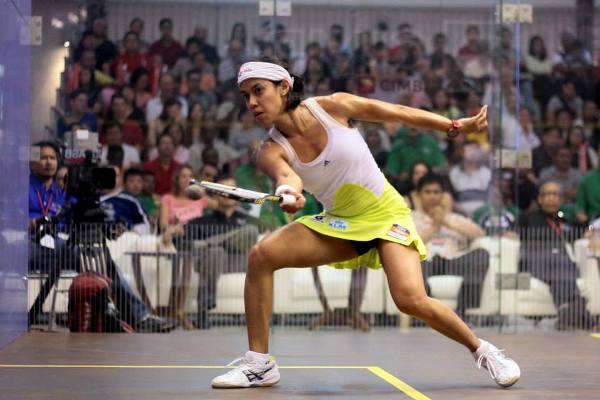 Datuk Nicol David has been handed an easy path in her quest to win an eighth World Championships title.

DATUK NICOL DAVID was handed a relatively easy path in her quest to win an eighth Women’s World Championship title after the draw was revealed today.

The world No. 1 will face Emma Beddoes of England in the first round of the tournament and if she wins, Annie Au of Hong Kong awaits in the second round.

Her two biggest rivals, second seed Laura Massaro and third seeded Raneem El Weleily will only pose a threat should Nicol make the final, as the duo were drawn in the bottom half of the table.

After back-to-back titles in the Tournament of Champions and the Cleveland Classic this year, Nicol is a shoo-in for the title, especially with the championship being staged in her hometown in Penang.

Her compatriot Low Wee Wern was also given a winnable tie in the first round as she takes on Australia’s Donna Urquhart. The world No. 6 will however need to be at her best if she makes the second round, as second seed Laura Massaro is most definitely to be her opponent.

Laura will play another Malaysian in Vanessa Raj in the first round and should not have any problems defeating the teenage rising star.

The qualifying rounds of the Women’s World Championship will take place at the Nicol David International Squash Centre, while the main draw will be played at the sPICE Arena in Penang.