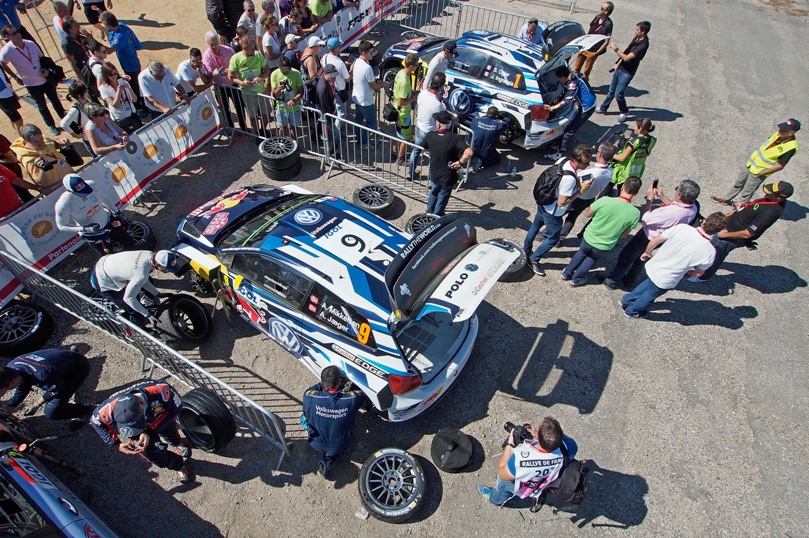 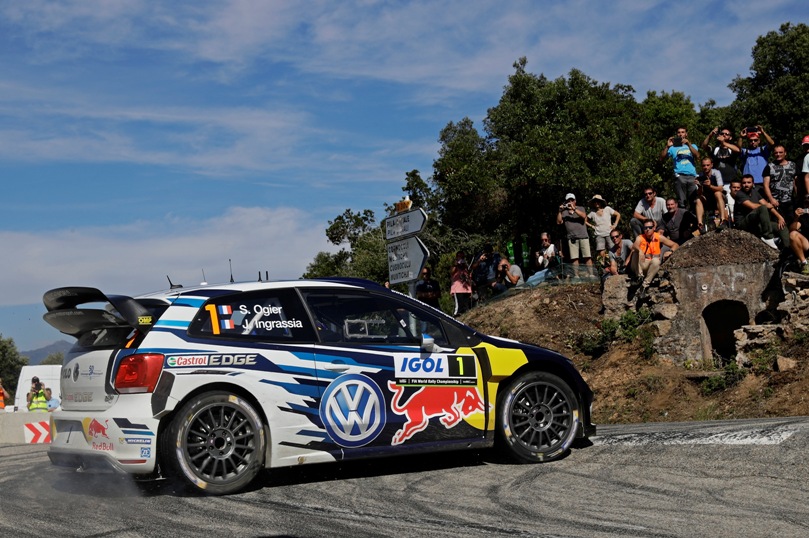 It doesn’t get any better than this. Sébastien Ogier/Julien Ingrassia (F/F) made a perfect start to the Rally France on Corsica in their Polo R WRC. The three-time world champions, who could claim the title for the fourth time in a row with victory at their home race – provided other results go their way – won all four special stages on the opening day of round ten of this season’s FIA World Rally Championship (WRC).

Two of the duos out to prevent the Frenchmen from getting their hands on the title this weekend are their Volkswagen team-mates, who are also on course for success: Jari-Matti Latvala/Mikka Anttila (FIN/FIN) ended day one in third place, just ahead of Andreas Mikkelsen/Anders Jæger (N/N) in fourth.

Second place after 157.68 of 390.92 kilometres against the clock is occupied by Thierry Neuville/Nicolas Gilsoul (B/B, Hyundai). While Ogier/Ingrassia opened a commanding lead of 44 seconds, just 15 seconds separate the chasing pack of three in their battle for second and third.

Quotes after day one of the Rally France

Sébastien Ogier, Volkswagen Polo R WRC #1
“An ideal opening day for Julien and me – beautiful stages, superb weather and a perfect car. The key to stage one was to find our rhythm. Looking at the lead we opened, we appear to have done just that. It was pretty hot in the cockpit in the afternoon, particularly on the long 50-kilometre stage. We have a similarly demanding day ahead of us tomorrow, particularly if the weather deteriorates. However, we obviously want to continue as we were today, to make sure we win in the end. That is definitely the goal at our home rally.”

Jari-Matti Latvala, Volkswagen Polo R WRC #2
“We were a little too cautious at first, but gradually found our rhythm the further into the rally we got. We can make a few improvements here and there, for example when braking, but apart from that we are racing the right way for the Rally Corsica. That only makes the outstanding times set by our team-mate Sébastien Ogier all the more astonishing. Hats off to his performance. We will obviously try to stick with himtomorrow and on Sunday. If we can, we have a good chance of finishing on the podium.”

Andreas Mikkelsen, Volkswagen Polo R WRC #9
“We are not so much focusing on winning the world championship, but more on securing second place. With that in mind, we are going nicely in fourth place. I struggled to know how hard to brake in the morning. Unfortunately, we lost a lot of time as a result. Apart from that, though, it was a good day for us, but we have two more challenging days ahead to come.”

Sven Smeets, Volkswagen Motorsport Director
“We could hardly hope for a better start to the Rally France. Sébastien Ogier was clearly in a league of his own, while Jari-Matti Latvala and Andreas Mikkelsen are also well-placed. First, third and fourth is more than we had expected and hoped for. However, everyone in the team is well aware that we are only one third of the way into the rally and we still have a lot of work ahead of us. If we remain as focused as we have been so far, there is a good chance we will be rewarded with a strong result.”

… a little milestone. Andreas Mikkelsen is contesting his 75th rally in the World Rally Championship at the Rally France – the 45th with Volkswagen and the tenth with his co-driver Anders Jæger. The Norwegian made his debut at the 2006 Rally Great Britain. Since then, he has finished on the podium on 18 occasions, including victories at the 2015 Rally Spain and the 2016 Rally Poland – all with the Polo R WRC.

Standings after day two of the Rally France