Home 2022 Olympic champion Ingebrigtsen gets 2022 off to flying start 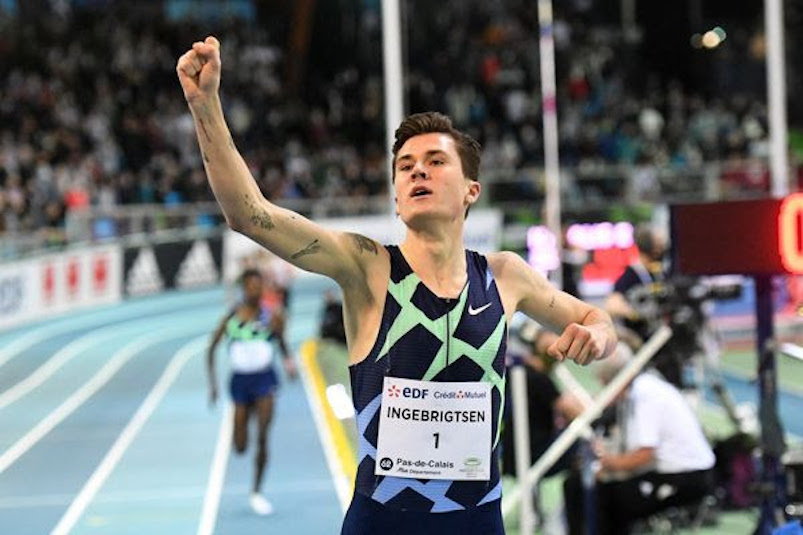 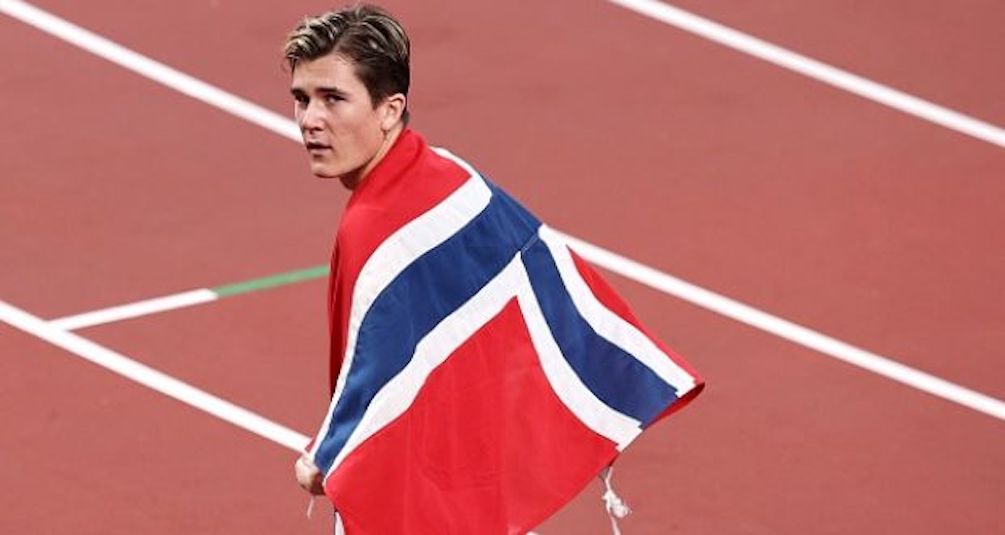 Keen followers of the sport have been aware of his talent for several years now. Indeed, almost four years have passed since he won the European 1500m and 5000m titles in Berlin, aged just 17 at the time.

And yet, thankfully – and somewhat unusually for a teenage prodigy – the Norwegian is showing no signs of burnout.

Six months after winning Olympic 1500m gold in a European record of 3:28.32, Ingebrigtsen broke his first senior world record* when winning the 1500m at the World Athletics Indoor Tour Gold meeting in Lievin with 3:30.60. Not bad for his first race of the year.

With the assistance of two pacemakers and wavelight technology, Ingebrigtsen passed through 600m in 1:24.66 and 800m in 1:52.86. He reached 1000m in 2:20.98, bang on target, and then started to pick up the pace for the final two laps. By the time he reached the bell in 3:03.04, he had opened up a significant gap on his one remaining opponent: the previous world indoor record-holder and 2018 world indoor champion Samuel Tefera.

Ingebrigtsen covered the final lap in 27.57 seconds, reaching the finish line more than three seconds ahead of his Ethiopian opponent in 3:30.60 to take 0.44 off Tefera’s world indoor record.

“I wanted to break the world indoor record last year, even though it wasn’t the main goal then,” said Ingebrigtsen, who set a European indoor record of 3:31.80 when winning in Lievin last year. “I want to improve and run faster than I have done before. It’s everyone’s dream to win championships and beat records. This is my first world record; hopefully more will come, but this is a big dream come true.

“Of course, first of all I want to improve my own times but obviously beating a world record is a big achievement for me. I will always remember this, it feels amazing. My next goal is to participate in Belgrade (at the World Athletics Indoor Championships) and having this record is a big advantage to win titles.

“I am better now that I’ve ever been,” he added. “This night in Lievin will be remembered for many years to come.”

Jakob Ingebrigtsen is the first to admit that his achievements as an athlete are largely thanks to training from an early age. Or, as he puts it: “I’ve been a professional runner since I was eight, nine, 10 years old.”

Born in the Norwegian city of Sandnes, Ingebrigtsen is the fifth of seven children in his family. Older brothers Henrik and Filip are also international athletes – and past winners of numerous continental titles – and all three of them have, until very recently, been coached by their father Gjert.

“I’ve been training, dedicated and following a good structure – the same as my brothers – from an early age,” says Ingebrigtsen. “Not too much, but a lot compared to runners in Norway. That’s the main reason (for my success).”

As far back as 2012, when Henrik won the European 1500m title, and then again in 2016, when Filip earned continental gold over the same distance, the two older brothers would often go on record to say that their younger brother is the one to watch out for.

It wasn’t long before Jakob Ingebrigtsen made his talents known. At the end of 2016 he won the European U20 cross-country title by a comfortable margin, despite being the second-youngest in the field of 87 runners.

That first taste of senior international championship competition would prove invaluable as he headed into 2018. He broke numerous European U20 records across a range of distances, indoors and out, then earned 1500m silver and 5000m bronze at the World U20 Championships in Tampere.

But it was at the European Championships in Berlin where the then 17-year-old was catapulted into the limelight. As if attempting two distances as a senior international championships wasn’t audacious enough, Ingebrigtsen won both the 1500m and 5000m titles on back-to-back days.

“Winning a second title in two days is the result of having done this my whole life,” he said. “It was a little crazy to get this medal. This is huge.”

Ingebrigtsen almost pulled off another distance double at the European Indoor Championships at the start of 2019. He won the 3000m, but then in the 1500m final one day later – Ingebrigtsen’s fourth race in three days – Marcin Lewandowski beat the young Norwegian, gaining revenge for his defeat at the 2018 European Championships.

Ingebrigtsen had bigger goals outdoors, though. After another spate of European U20 records throughout June and July, Ingebrigtsen, still an U20 athlete, knew he could be a competitor at the World Championships in Doha, where he was entered for the 1500m and 5000m. Despite being the youngest in the 1500m final, he just 0.24 shy of a medal in fourth in 3:31.70. He was close to a podium finish in the 5000m too, placing fifth in 13:02.93.

His year – and his time as an U20 athlete – ended on a high later that year, though, when he won his fourth successive U20 title at the European Cross Country Championships in Lisbon.

They were all building blocks towards 2021 when Ingebrigtsen would make his Olympic debut. First, though, came the European Indoor Championships where he made light work of winning the 1500m and 3000m titles.

In his second outdoor race of the year, he beat a loaded 5000m field at the Wanda Diamond League meeting in Florence, winning in a world-leading European record of 12:48.45. But despite his breakthrough into sub-13-minute territory at that distance, Ingebrigtsen opted to focus on just the 1500m at the Olympic Games.

It proved to be a wise move. World champion and regular rival Timothy Cheruiyot took the race out at a swift pace, as expected. But unlike in most of their previous clashes, this time the Kenyan was unable to hold off Ingebrigtsen’s late charge as the youngster came through to take gold in 3:28.32, breaking his own European record.

What started as something of an after-school pursuit for the Ingebrigtsen brothers and their father Gjert finally came to fruition in Tokyo in August 2021.

And judging by his world indoor 1500m record of 3:30.60 in Lievin, Ingebrigtsen won’t be slowing down any time soon.