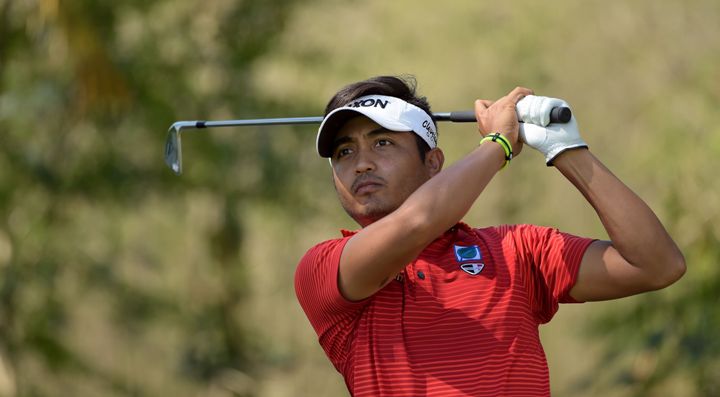 Thailand’s Panuwat Muenlek launched his quest for a second Asian Development Tour (ADT) victory when he fired a seven-under-par 65 to take the opening round lead at the PGM Darulaman Championship on Wednesday.

The 30-year-old Thai, who claimed his breakthrough ADT win last March, marked his card with eight birdies against a lone bogey to lead by one shot over American Josh Salah and Sukree Othman of Malaysia at the Darulaman Golf and Country Club.

Thailand’s Itthipat Buranatanyarat, highest ranked player in second place on the ADT Order of Merit, signed for a 69 to tie in 10th place while Malaysia’s number one golfer Danny Chia, who is bidding to qualify for the upcoming Olympics, returned with a 70 to sit in tied-18th position.

Panuwat, who has enjoyed a top-10 finish so far this season, credited his hot putter as he navigated his way around the golf course with only 22 putts.

“My putting was solid and I hit the ball good today. I got off to a great start with two straight birdies and that got my momentum going. The highlight of the day was on the fourth hole where I hit a great approach shot onto the green after hitting my tee shot into the trees on the left. I sank the putt and birdied that hole,” said Panuwat.

Salah, a one-time winner on the region’s burgeoning Tour, also used his solid putting skills to his advantage as he amassed 28 putts to stay bogey-free in his round of 66.

“I putted well. I managed to hit a lot of fairways and greens today too. I had a good finish to the round on the ninth. I hit my second shot with a nine-iron to about two inches from the pin and made a birdie there,” said the 25-year-old American.

The PGM Darulaman Championship, jointly sanctioned with the Professional Golf of Malaysia (PGM) Tour, is the ninth leg of the 2016 ADT season and also the Tour’s seventh stop in Malaysia this season.

Like all other ADT events, the PGM Darulaman Championship will also offer Official World Golf Ranking (OWGR) points, which will be key for players vying to qualify for the Olympic Games in Rio De Janeiro this August.