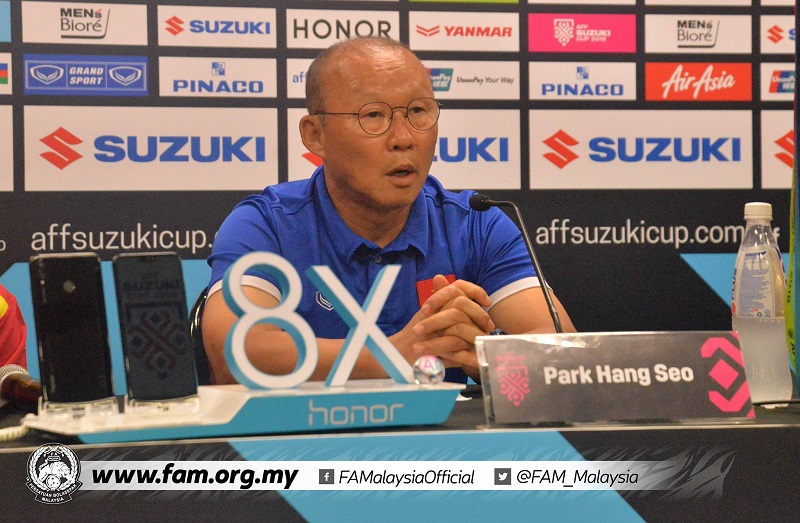 Ahead of Vietnam’s training camp to prepare for the upcoming October matches in the second round of the 2022 World Cup AFC qualifiers, the Republic of Korea tactician answered the media’s queries concerning the current situation of the national team as well as his personal assessments about Malaysia – the next Group G challenge for his side.

“My assistant Lee Young-jin watched Malaysia’s matches while I followed the games of Indonesia. I already watched the video replays of Malaysia’s clashes. They are being led by the old coach but have some changes in the squad. Their attacking lineup is now much sharper compared to the AFF Cup last year,” Park said.

He frankly admitted that Vietnam’s playing style was undoubtedly researched and thoroughly understood by the opponents.

“I’m thinking about how we will play. Of course, it is impossible to make a complete change, but I will try to make the best changes to create confusion and chaos for the opponents. I am working to address the disclosed tactics and analyze how Malaysia have been different from the AFF Cup”.

Regarding the summoning of up to 32 players to the national team for the training camp, Park stated that the decision is part of the coaching staff’s calculations, as the adjustment of the V.League schedule to facilitate Hanoi FC’s participation in the AFC Cup Inter-zone final has given the national squad more time to prepare for the World Cup qualifying mission. Therefore, he decided to call up a large force with many new faces to test and evaluate their form and adaptation ability.

“Each coach often has private criteria in training players. I cannot tell exactly each of my selection criteria. What’s the most important is the player’s capability, followed by the ability to operate, understand and acquire tactics. In terms of fitness, it depends on each position to have each different requirement”.

Answering a query on whether overseas Vietnamese players should be summoned to the national team, the 60-year-old tactician stated: “Many overseas players were not born in Vietnam, so they understand little about the Vietnamese culture. I am a little concerned that it is difficult for overseas Vietnamese players, with mindset and language differences, to integrate into the team spirit of the Vietnamese squad. What about their integration ability? Of course, it is just the matter of procedures. If the overseas players are really talented, they could definitely be summoned to the national team. However, if their capabilities are just equal to domestic players, we should make considerations”.

In the afternoon, Park Hang-seo and his national team players entered the first training session at the Vietnam Youth Football Training Centre in preparation for the second Group G match, against Malaysia, at Hanoi’s My Dinh Stadium on October 10.nhandan