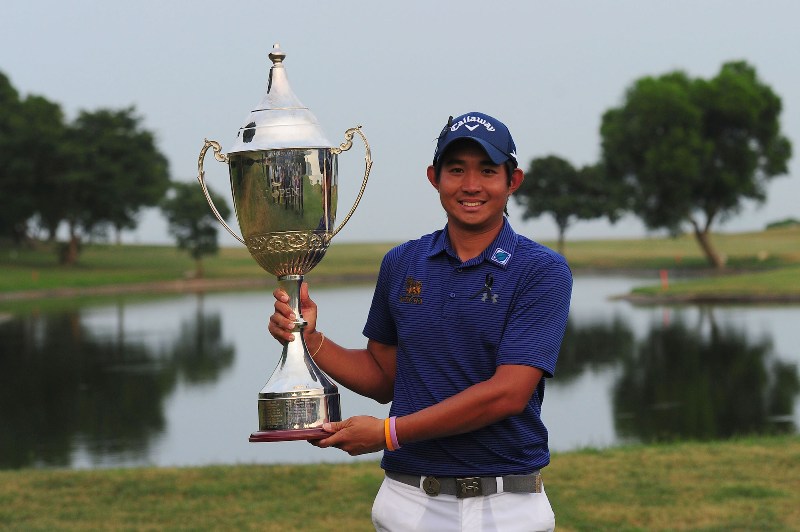 Pavit Tangkamolprasert dedicated his first Asian Tour victory at the Venetian Macao Open to the late king of Thailand, King Bhumibol, after prevailing over India’s Anirban Lahiri in a play-off on Sunday.

The 27-year-old Thai and reigning Asian Tour number one Lahiri put on an exhibition of golf by shooting a seven-under-par 64 and 65 respectively in the final round to tie at 16-under-par 268 at the Macau Golf and Country Club.

Pavit, who earned US$S198,000 for his career breakthrough, triumphed in extra-time with a birdie on the par five 18th hole after Lahiri, the 2014 champion here, found the water hazard with his second shot following an errant drive en route to a bogey. Lahiri settled for the runner-up spot for a third time in four years.

It was an emotional week for Pavit and the Thai players as King Bhumibol died on Thursday and Pavit believed the revered ruler was helping him all week. “All the Thai players are very sad after hearing the news back home. The king is our inspiration this week, our life and this trophy is for the king. I dedicate this win to the king,” said Pavit.

A five-time winner on the Asian Development Tour where he was number one in 2014, Pavit has only one top-10 on the Asian Tour in 65 starts previously but it all clicked in a pulsating final day showdown with Lahiri

Big-hitting Pavit overturned a one-shot deficit into a three-shot lead with some hot putting, going to six-under through 13 holes and was seemingly coasting to a well-deserved victory. However, Lahiri, who looked out of contention and trailed by five at one stage, produced his best stuff coming home as he brilliantly nailed seven successive birdies to force a play-off which he subsequently gave away the title.

Pavit said: “I didn’t think I would be in a play-off but I got lucky as Anirban hit his second shot into the water. All the hard work paid off this week. I didn’t think about winning because I don’t even have Asian Tour status. I just wanted to play my best. This win will now give me a two-year exemption.”

Being the third Thai first-time winner on the Asian Tour this season, Pavid added that he didn’t know Lahiri was on a birdie blitz and hot on his heels late in the day. “I didn’t see the scores on the back nine as there was no leaderboard.

The 29-year-old Lahiri was disappointed his good work in regulation play was all for nought, with the runner-up result getting him into next week’s CIMB Classic in Malaysia via the Asian Tour’s Order of Merit.

“I was happy I won the toss and I wanted to go first (in the play-off). I think I rushed into that and I was trying to lay up on the second shot but the rough was a bit thick. I didn’t even think of the hazard being there. I guess that was unfortunate to finish like that. I’m happy with the way I played the back nine but disappointed I finished second again,” said Lahiri.

Chinese Taipei’s Chan Shih-chang shot a superb 65 to finish tied third with co-overnight leader Chikkarangappa S. of India, who returned a 68. Both finished three shots behind the play-off duo.

“I was hitting all over the place but I managed to hang in there. I lost some momentum on 11 again, making that bogey. I can take some positives from this. I’ve never seen a finish like that before. I know how strong Anirban is in the head. He had a bad start with some bad tee shots but the way he came back, that was amazing,” said the 23-year-old Chikkarangappa, whose third straight top-10 locked up his Tour card for 2017.

Chan, already a two-time winner this season, wished he had a stronger start to put the pressure on the leaders. “My back nine was perfect but not the first nine, I had many tries for birdies but my putting speed wasn’t good. The leaders were also too far in front after that,” he said.

(Pavit won with a birdie on the first play-off hole)