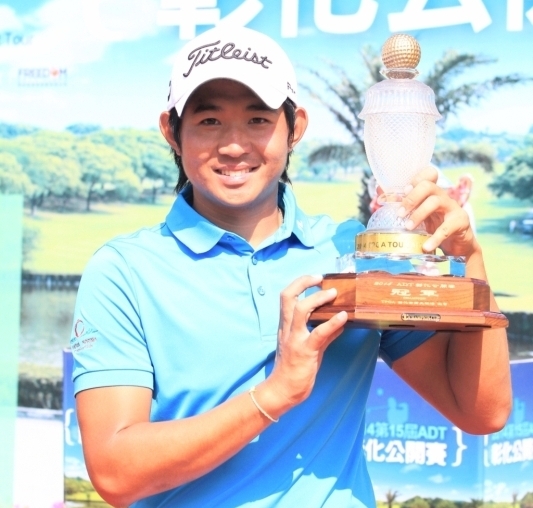 Overnight leader Pavit Tangkamolprasert of Thailand outclassed the talented field by firing a four-under-par 67 to win by four shots at the 15th ADT Chang Hwa Open on Sunday.

The 25-year-old Thai, who compiled a four-day total of 13-under-par 271, matched the efforts of Chinese Taipei’s Chan Shih-chang in claiming a total of four ADT victories since the burgeoning circuit was inaugurated as a gateway to the Asian Tour in 2010.

Pavit walked away with the winner’s prize purse of US$17,500 and surpassed previous leader Chan at the top of the ADT Order of Merit with his season’s haul of US$68,428.

Niall Turner of Ireland battled to a 70 to sit in second place while England’s Grant Jackson, who carded a 68, stayed a further shot back in third on 276 at the US$100,000 ADT event, which returned to the ADT schedule for the second straight year this season.

Malaysia’s Arie Irawan returned with the day’s lowest score of 65 to settle for a share of fourth place with Thailand’s Rattanon Wannasrichan and Lin Chien-bing of Chinese Taipei on 278 total at the Chang Hwa Golf Club.

Starting the round with a one-shot edge, Pavit continued his consistent form by marking his card with five birdies against a lone bogey to close with a third consecutive 67 in the 15th ADT Chang Hwa Open.

“I’m playing good golf at the moment. This win means everything to me. It gives me a lot of confidence for my next tournament in Macau,” said Pavit, who had received an invitation to play at the US$900,000 Venetian Macau Open held on the Asian Tour next week.

“It’s great to top the ADT Order of Merit. I feel like my hard work has paid off. I feel more confident to play on the Asian Tour now. It’s been a great week for me. I just play my own game out there and not think about anything else today. I tried to stay relax and I’m happy to get a good result,” added Pavit.

Meanwhile Turner, who won his maiden ADT victory in Jakarta in July, was left to wait longer for his second title.

“I struggled a bit with my game today but I’m still happy with how I played. Pavit played very well and I didn’t think I had a chance to win. Overall I am happy to finish second, especially having to cope with a jetlag coming to this week,” said the 31-year-old Irishman, who traded two birdies against a lone bogey.

The Chang Hwa Open is the ADT’s third and final stop in Chinese Taipei this season, following the successful staging of the Taifong Open and Ballantine’s Taiwan Championship in July and August respectively.

All ADT events also receive Official World Golf Ranking (OWGR) status which is a boost for the game in the region.