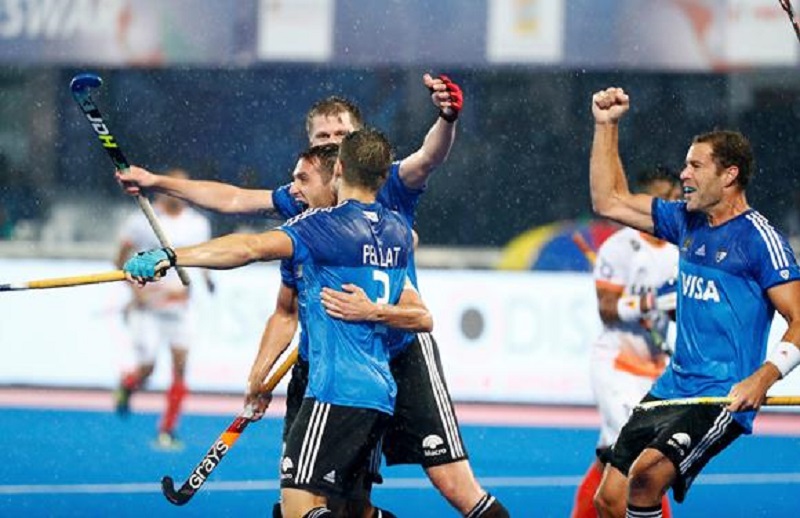 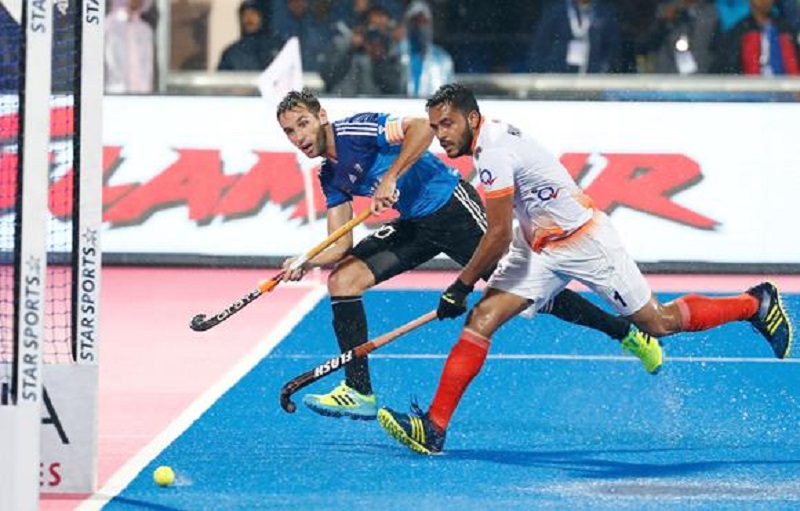 India’s quest to win the Hockey World League title on home soil in Bhubaneswar came to an end on Friday (8th December 2017), with Olympic champions and world number 1 Argentina taking a 1-0 semi-final victory over the hosts to claim their place in competition on a rainy night at the Kalinga Stadium.

Argentina will now await the winners of the second semi-final, with reigning world and Hockey World League champions Australia taking on Germany on tomorrow evening.

The semi-final meeting between Argentina (FIH Hero World Ranking: 1) and India (WR: 6), two of the most attack-minded teams in the game, was certainly hampered by the playing conditions, with neither side being able to produce the kind of hockey for which they are renowned due to torrential rain.

Despite the conditions, the two teams gave it absolutely everything in their efforts to book a ticket to Sunday’s final, with another huge crowd braving the conditions in order to witness the action.

Following Argentina’s quarter-final victory over England, Leones attacker Lucas Vila expressed his frustration that his side were not being given enough chances to utilise their penalty corners, with teams doing everything they could to avoid giving Gonzalo Peillat any opportunity.

Vila stated that he felt Peillat could be the difference in the semi-final, and his point was proven correct when the brilliant flicker defied the conditions to send a rocket inside the right post of goalkeeper Akash Chickte two minutes into the second quarter.

Argentina soaked up huge amounts of Indian pressure in the third and fourth quarter, with the hosts enjoying an incredible 79 percent possession in the latter. However, an equaliser never came and

Argentina are now one win away from adding the Hockey World League title to the Olympic gold medal that they claimed at Rio 2016.

“I’m very proud of our performance today as it was tough out there”, said Argentina goalkeeper Juan Vivaldi after the match. “We played a smart game, scored a good goal and defended really well.”

Regarding the reliability of Gonzalo Peillat from penalty corner situations, who scored from his only opportunity, Vivaldi said: “The last two games he hasn’t had any chances, and we know it is really important for our system that he gets those opportunities. Today we get one corner and he scores, so we are really happy as a team and also for him.”

Earlier in the day, the Netherlands finished their Odisha Men’s Hockey World League campaign on a winning note by defeating England 1-0 in a rain-soaked 7-8 classification match.

The winner came from the stick of star striker Hockey Stars Male Player of the Year 2017 nominee Mirco Pruijser, who beat Hockey Stars Goalkeeper of the Year nominee George Pinner – who made his 100th appearance for England in the contest – with a third quarter field goal.

Referring to match-winner Pruijser, Netherlands star Valentin Verga said:“He’s the man who is there to finish the chances, and he is so good at that.”

The action continues on Saturday 9th December with Belgium and Spain taking to the field in the 5-6 classification match at 17:15 Indian Standard Time (UST+5.30).

That contest will be followed by the second of the semi-finals with Hockey World League title holders Australia taking on Germany at 1930 for a place in the championship match against Argentina. ??