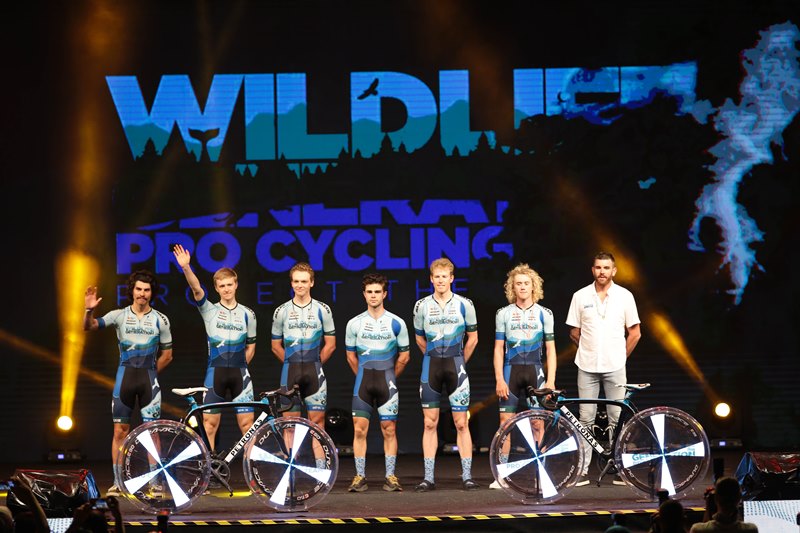 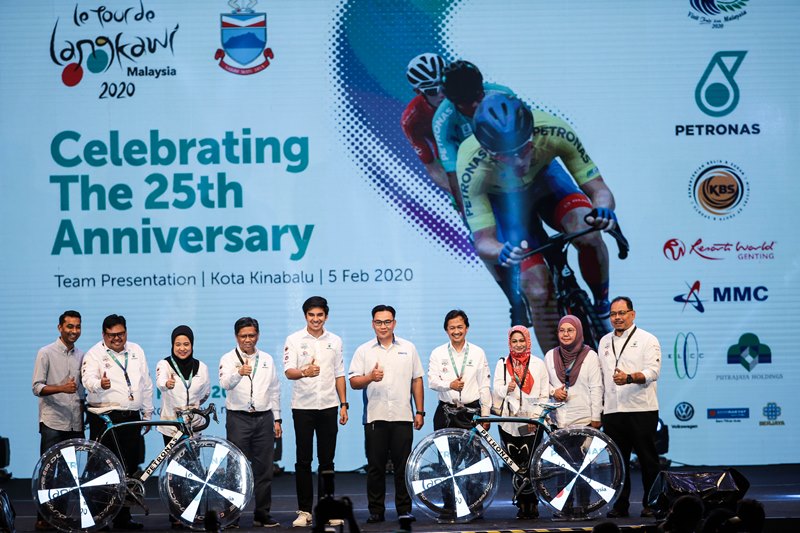 THE 25th edition of the PETRONAS Le Tour de Langkawi got off to a colourful start with the official introduction of all participating teams in a customary Team Presentation ceremony here tonight.

All 21 teams, made up of 1 UCI World Team, 5 Pro teams, 14 Continental and one national team representing Europe, Asia, Africa, America and Oceania were presented in the ceremony, held at Padang Merdeka for the first time in the Tour’s history.

The Tour makes its return to Sabah and Sarawak after a long hiatus, setting another milestone with a new status as a ProSeries race. This year’s edition also coincides with the race’s silver jubilee celebration.

The cycling extravaganza begins tomorrow here with the 90km-Malaysian International Criterium race, ahead of the race proper which begins with Stage 1 in Kuching on 7 February (Friday).

Prime Minister YAB Tun Dr Mahathir Mohamad was not present at the ceremony but gave his words of encouragement to participants, officials and the race entourage via a 3-minute and 15 seconds video message.

“As much as I’m not here physically, I’ll be following the race closely. I promise to see all of you in the final stage in Langkawi,” said Tun Mahathir in reference to the Stage 8 finale in Langkawi scheduled on February 14.

The Prime Minister reiterated that this year’s PETRONAS Le Tour de Langkawi is indeed a special event which everybody can be proud of, urging “those involved in the organization of the race” to strive for new milestones and achievement.

“It is my fervent hope that we can elevate Le Tour de Langkawi from a prestigious cycling event into a race with a strong identity and brand that it would last for another 25 years,” said Tun Dr Mahathir.

Tun Dr Mahathir expressed hopes that LTdL would turn to be like some of the world’s Grand Tours such as Giro d’Italia and Tour de France whereby international cycling fans plan years ahead and are willing to take long flights to Italy or France just to experience the race and the country.

“I believe this is achievable. Already, our cyclists are of world-class, but to reach to that stage, we must capture the imagination of cycling enthusiasts and their communities.

We must come up with a comprehensive plan and start putting in the hours to make it a reality,” said Tun Dr Mahathir.

Syed Saddiq commended the organisers, urging the masses and fans to show their support and be part of this event by cheering for their favourite teams and at the same time, displaying Malaysian hospitality to the world.

He added with cycling has a huge estimated audience of about 3.5 billion mainly in Europe, North America and China. “This year’s edition will be widely shown to hundreds of millions of audiences via live broadcasts across the globe on Eurosport 2 in 52 countries, and Eurosport Asia-Pacific in 11 countries.

“An important development is the fact that the race will be covered live online daily throughout the entire race, starting at 12 noon via the organiser’s official YouTube channel – HumanVoyageChannel.” said Syed Saddiq.

“I assure you that this partnership will be as rewarding given that cycling today has been well-received by Malaysians that it can be considered as a grassroots sport that has touched the hearts of every Malaysians,” said Syed Saddiq.

“The sponsorship resonates well with PETRONAS’ commitment towards nation building efforts through talent development. We recognise the continued value creation and positive social impact it creates as the foundation to a more sustainable and progressive nation,” said Tan Sri Wan Zulkiflee.

This year’s PETRONAS Le Tour de Langkawi begins with a UCI-sanctioned Malaysian International Criterium race, ahead of the Stage 1 race in Kuching on Friday before a transfer across the South China SEA to the east coast in Kuala Terengganu for Stage 2.

From Kuala Terengganu, the race heads for Kerteh, before crossing to the west coast of the Peninsula, which include the signature queen stage in Genting on February 10. The race then sneaks its way to the north for the finale in its birthplace in Langkawi on February 14. The Malaysian International Classic, held in conjunction with the LTdL’s silver jubilee celebration, concludes the festivities on February 15 in Langkawi.