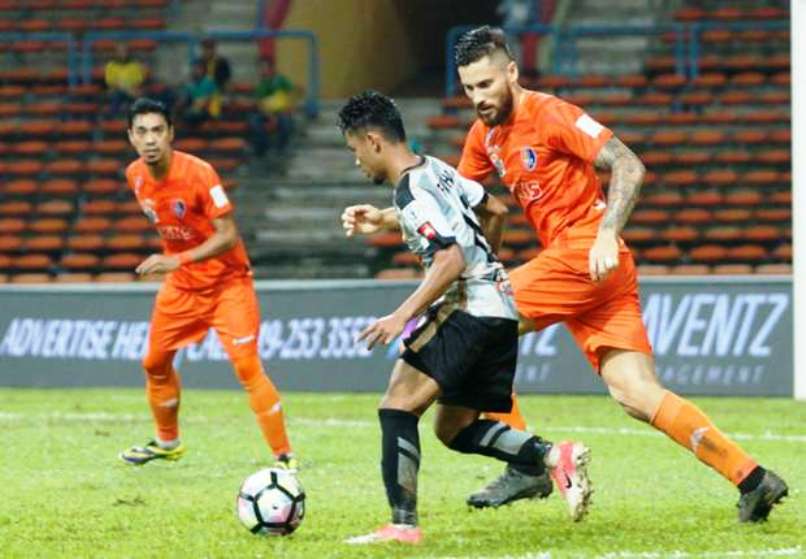 It was a an eight-goal thriller at the Shah Alam Stadium as PKNS FC and Kedah drew 4-4 in Tuesday’s Super League match with both sides converting injury time penalties on a night when Sarawak drew 1-1 with Selangor at the State Stadium in Kuching.

Kedah led 3-1 at half-time but E. Elavarasan’s club side once again displayed their fighting qualities to deny the reigning Malaysia Cup champions a win which would have given the Red Eagles second place in the league.

Defending champions Johor Darul Takzim (JDT) lead the 12-team Super League with 27 points despite being held to a 1-1 draw at the Hang Jebat Stadium in Melaka on Saturday. On the same day Kelantan, still reeling from being docked six points, inflicted a painful 3-2 defeat on Pahang and in the process handed the Elephants their first at home this season.

Kedah’s Danish striker Ken Ilso Larson gave the visitors the lead after only five minutes but Liberian hit-man Patrick Ronaldinho made it all square on 12 minutes.
However, a brace by Syafiq Ahmad in a spate of seven minutes gave Kedah a healthy 3-1 lead at half-time. Syafiq’s first came in the 16th minute when he finished off a cross from Syazwan Tajudin before he planted power packed header from a Sandro da Silva corner on 22 minutes.

PKNS, who played in the Sultan of Selangor Cup against Singapore last Saturday at the National Stadium in Singapore, reduced the deficit in the 56th minute through Matias Hadwa who was set up by Lucas Sebastian.

It was 3-3 by the 89th minute when Sebastian got his name into the scoresheet but it did not end for Kedah who pulled ahead to 4-3 when Sandro converted a penalty in injury time.

If Kedah thought it was the winner and three points in the bag for them, the script took a different turn when PKNS were awarded a penalty in the dying seconds. Hadwa got his second on the night when he made no mistake from the spot to make it 4-4 for a dramatic finish at Shah Alam Stadium.

At the State Stadium in Kuching the Crocs took the lead through Mateo Roskam after 3 minutes before Rizal Fahmi netted Selangor’s equaliser just before halftime.