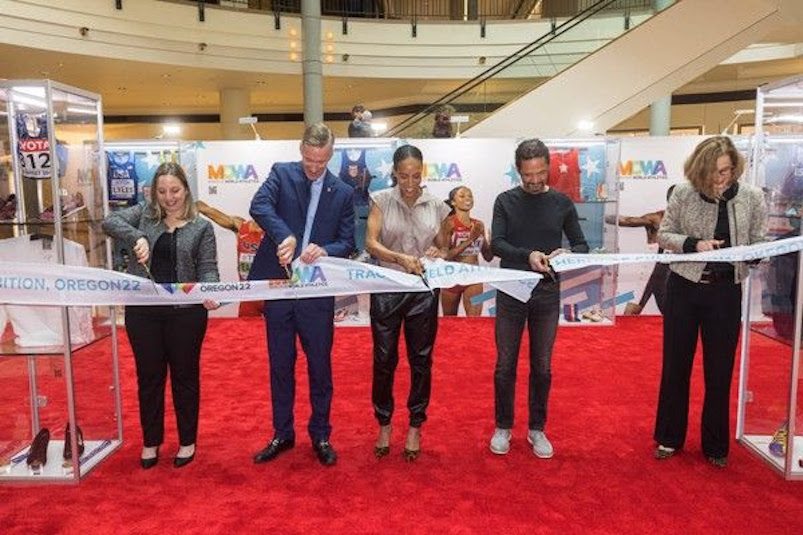 The Museum of World Athletics (MOWA) exhibition, which is the first of two heritage displays to be opened in Oregon ahead of the World Athletics Championships Oregon22 (15 to 24 July), is located in Pioneer Place shopping mall in downtown Portland.

During today’s opening ceremony, South African born Plaatjes, who won the marathon gold medal at the 1993 World Championships in Stuttgart, Germany, made a generous donation to MOWA. He presented his green springboks’ singlet, which he wore when running his marathon personal best of 2:08:58 in Port Elizabeth on 4 May 1985, to the museum’s World Athletics Heritage Collection.

“I am honoured that my singlet is now part of the Museum of World Athletics and is on display in Portland for the next four months,” smiled Plaatjes. “My donation is in the best of company when you consider that one of Eliud Kipchoge’s Rio 2016 Olympic shoes sits nearby.”

Plaatjes was the first South African to break 2:09 and his time would then have put him 12th on the world all-time list. However, due to the apartheid system in South Africa, Plaatjes and his compatriots were in international sporting isolation.

In 1988, Plaatjes, a victim of apartheid due to his mixed race, fled his homeland with his family. They successfully attained political asylum in the USA, though he was not granted citizenship until 1993, just weeks before Stuttgart. Plaatjes had provisionally been selected for the USA team based upon his sixth-place finish at the Boston Marathon.

Plaatjes was joined at the opening ceremony by Portland City Mayor Ted Wheeler, Sasha Spencer-Atwood, Director of Athlete Experience at the World Athletics Championships Oregon22, Jessica Curtis, General Manager of Pioneer Place and Billie Moser, Travel Portland Vice President International Affairs & Community Engagement. Together the five guests declared the MOWA exhibit open by cutting the official ribbon and unveiling the showcases – after which, Plaatjes’ singlet was placed into the display.

The Portland exhibit will be open to the public until the end of the World Athletics Championships Oregon22 on 24 July. A second MOWA exhibition in the University of Oregon in Eugene, where the 2000 athletes will be accommodated during the championships, opens on 23 June, less than a month before the championships, and will also close on 24 July.

The two displays feature track and field exhibits from 1908 to the present day but are just a small fraction of the World Athletics Heritage Collection which is on permanent display on MOWA’s online platform in glorious 360° 3D.

Singlets, running shoes, equipment and trophies from more than 60 all-time greats of track and field athletics, representing more than 25 countries across all six continental areas, are featured.