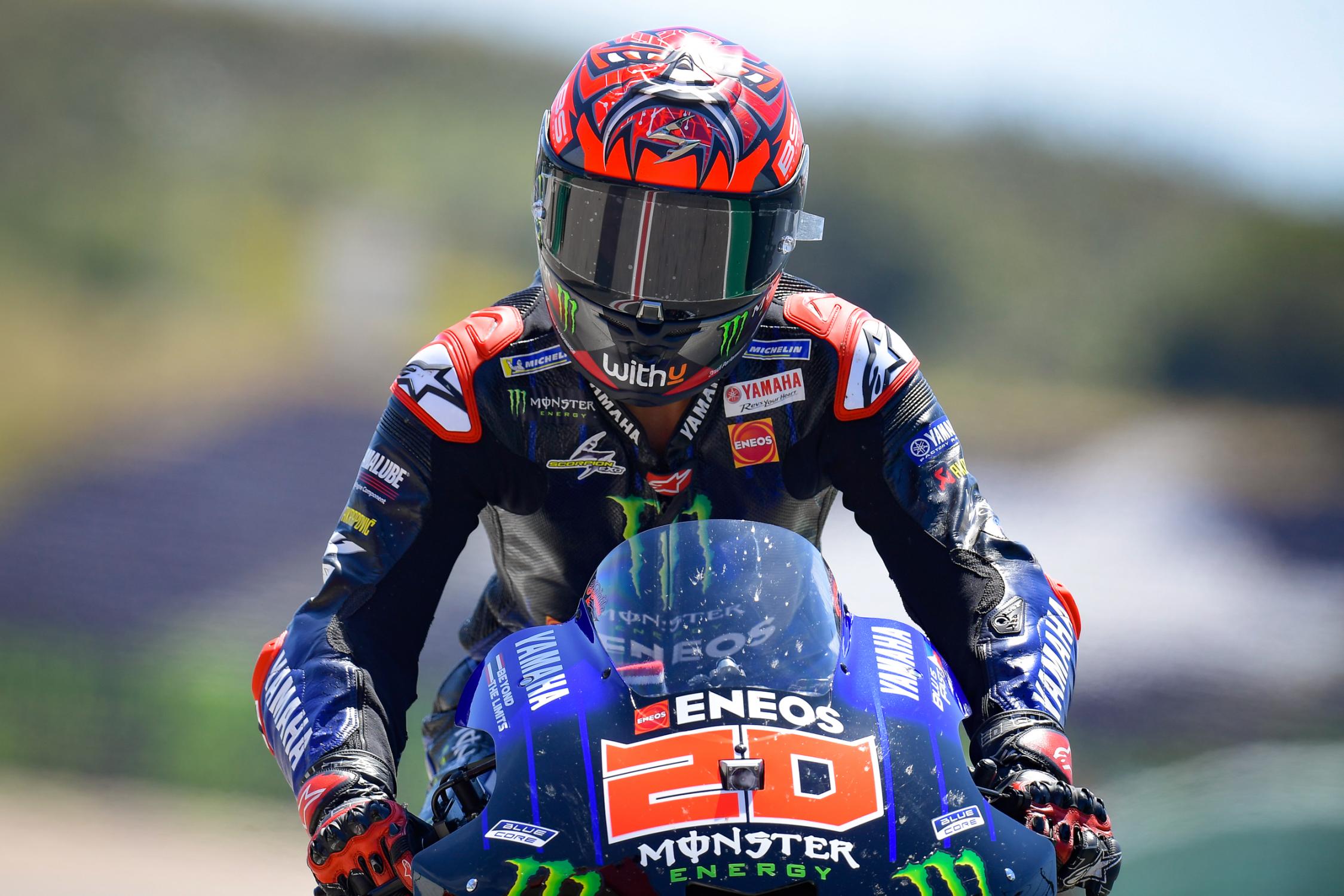 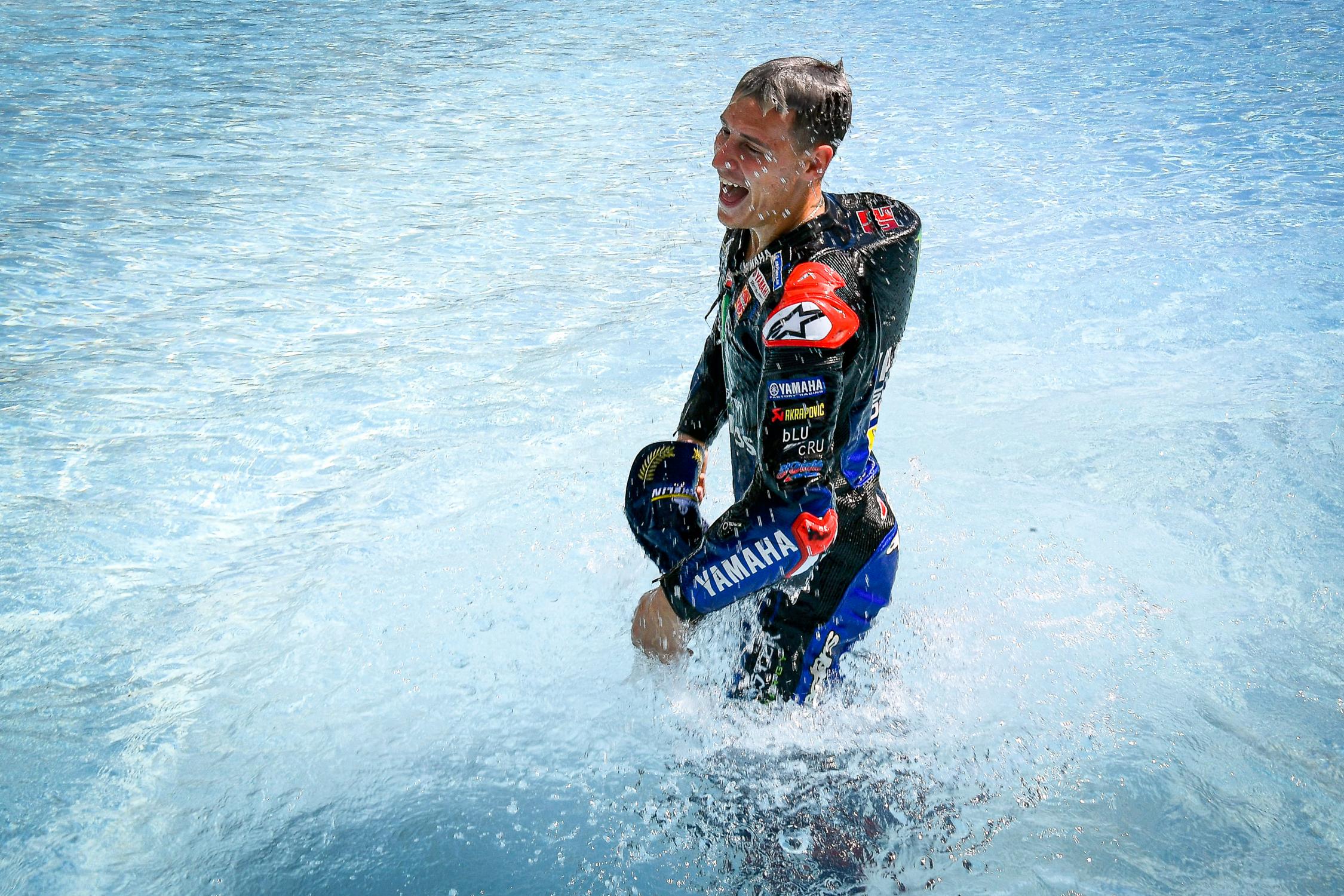 Pole to victory was the story of the Frenchman’s weekend in Portugal; Bagnaia and Mir claim podiums in a race of attrition

As weekends go, they don’t get much better than that for Fabio Quartararo (Monster Energy Yamaha MotoGP). The Frenchman converted pole position to victory at the Grande Prémio 888 de Portugal as the MotoGP™ race sees some big names crash out, but that wasn’t the case for second place Francesco Bagnaia (Ducati Lenovo Team) and third place Joan Mir (Team Suzuki Ecstar). The returning Marc Marquez (Repsol Honda Team) battles through the pain to finish P7 in Portimao.

The initial getaway from polesitter Quartararo was about as good as it gets, but in the second phase of the start, third place Johann Zarco (Pramac Racing) and second place Alex Rins (Team Suzuki Ecstar) got the better of the Yamaha man and it was the Suzuki of Rins who grabbed the holeshot, but Zarco was the early race leader. Marc Marquez made a wonderful start and was battling Jack Miller (Ducati Lenovo Team) for P3. Mir made a typically great start and was up into the top five, and it was Mir vs Marquez again on the opening lap. The reigning World Champion shoved his GSX-RR up the inside of the Repsol Honda at Turn 11 for P3.

So it was Zarco leading the opening lap and at Turn 3, Marc Marquez and Mir came close again – too close. Marquez tagged the back of Mir, luckily stayed on, but it allowed sixth place Quartararo to squirm through to fourth past Marquez and Miller, the latter and then Aleix Espargaro (Aprilia Racing Team Gresini) passed Marquez as the eight-time Champion slipped to P7. Up front, Rins showed a wheel to Zarco at Turn 13 but there was no way through… for now.

Lap 3 saw Quartararo make a clean move up the inside of Mir at Turn 1 for P3, the Frenchman making swift progress after getting a bit beaten up at the start, with a Turn 13 move on Zarco sticking at the third time of asking a lap later. So on Lap 5, Rins was now your race leader, but Zarco blasted back through on the straight. Then, suddenly, the sound of a bike hitting the deck was heard and as the cameras panned out, we saw Miller down at Turn 3 at the beginning of Lap 6. The Australian’s Portuguese GP was over after just over four laps, a disaster for the factory Ducati man. On the same lap, Miguel Oliveira’s (Red Bull KTM Factory Racing) hopes of another dream home round rostrum were over. The Portuguese star was down at Turn 14, he remounted but it was game over for Oliveira.

Quartararo had followed Rins through on Zarco and the Yamaha man now had his radar firmly set on P1. Just like he did on the other Suzuki, Quartararo dived up the inside down the hill into Turn 1 and El Diablo was now at the spearhead of the race. This was now where Quartararo and Rins started to display some Portimao superiority. A handful of laps later, third place Mir was one and a half seconds down on the leading duo, with Lap 14 seeing Quartararo set a 1:39.680 – the fastest lap. However, Rins was matching the Yamaha every step of the way. The duo exchanged fastest laps on numerous occasions, but some colossal drama was about to unfold for two riders.

First, we saw Rins crash at Turn 5 on Lap 19 of 25. The downhill, tricky left-hander caught out the Spaniard who was right behind Quartararo, and it was race over for the number 42 in Portimao. This gave Quartararo a 4.2 second lead over Zarco, with Bagnaia grabbing P3 off Mir at Turn 5. Then, a lap later at Turn 11, the World Championship leader was down. Zarco’s front washed away the top of the hill and the Frenchman slid out of contention, just after Bagnaia had picked him off at Turn 5.

Barring a disaster, victory was Quartararo’s. The podium battle, however, was still well on. Bagnaia was holding P2 and looking good, with Mir having Franco Morbidelli (Petronas Yamaha SRT) in his mirrors heading into the final exchanges. With two to go, the trio were locked together but Pecco wasn’t buckling, as fifth place Brad Binder (Red Bull KTM Factory Racing) was less than a second away from Morbidelli’s rear wheel. Mir was pressuring Bagnaia but the Italian was holding firm, and on the last lap, the Suzuki rider wasn’t quite close enough to make a move.

After yesterday’s antics in Q1, the pair are at it again in the opening laps of the Portuguese Grand Prix

Five seconds down the road, Quartararo cruised over the line to pick up his second win of 2021. A commanding victory for factory Yamaha’s new recruit, and one that sees him take a 15-point lead into Jerez – a circuit he was quite successful at last season. Bagnaia’s recovery from P11 to P2 was awesome, a fantastic Sunday in Portimao for the Italian who rises to P2 in the standings with his first podium of the year. Mir eventually beats Morbidelli by 0.179s to earn his first podium of 2021, an important result from the World Champion and another rostrum after starting from outside the top two rows.

It’s a return to form for fourth place Morbidelli, the Italian in the podium hunt throughout to hopefully banish the Losail woes. Binder’s P5 proves once again the South African is a Sunday rider through and through, that’s a morale-boosting result for KTM and Binder ahead of Jerez. Aleix Espargaro earns Aprilia an equal-best MotoGP™ result in P6, yet another great ride from the Spaniard, who beats the seventh fastest rider by 4.3 seconds.

That man is Marc Marquez. The eight-time World Champion completed his first race since the 2019 Valencia GP finale, and the emotions were shown by the Spaniard when he arrived back in his box. A truly commendable performance from Marc Marquez upon his return to MotoGP™, the world salutes his magnificent ride in Portimao.

Alex Marquez (LCR Honda Castrol) bags his first top 10 in P8, with reigning Moto2™ World Champion Enea Bastianini (Avintia Esponsorama) picking up his second top 10 MotoGP™ result in P9. Yet another brilliant ride from ‘The Beast’, and what an absolutely superb effort from 10th place Takaaki Nakagami (LCR Honda Idemitsu). The battered and bruised Japanese rider has been in considerable pain all weekend since his huge Friday Turn 1 crash, but a P10 sums up just how tough – physically and mentally – MotoGP™ riders are.

Maverick Viñales (Monster Energy Yamaha MotoGP) didn’t recover from a horror start, and in the end benefited from a few crashes to pick up P11. A disappointing day for Viñales in Portimao, he was 23 seconds shy of teammate Quartararo. Luca Marini (SKY VR46 Avintia) slipped to P12 from a P8 start but it was nevertheless a very promising weekend for the Italian, a job well done. Injured Danilo Petrucci (Tech3 KTM Factory Racing), Lorenzo Savadori (Aprilia Racing Team Gresini) and Iker Lecuona (Tech3 KTM Factory Racing) completed the points, Oliveira was the final finisher in P16 after his crash.

Quartararo marches on in the 2021 title race, two wins from three is the Frenchman’s tally heading to Jerez, and it’s a soon to be 22-year-old brimming with confidence as rivals fall by the wayside in Portugal. A weekend off is followed by the Spanish GP at the end of April/start of May, and already the title race is twisting and turning. After all, this is MotoGP™.